Hurricane Harvey was the most powerful storm to hit the Texas coast since Hurricane Carla struck in 1961. The hurricane made landfall over the Port Aransas area on Aug. 25, 2017, leaving a wake of destruction in its path. The fast-moving Harvey quickly intensified from a tropical storm to a dangerous Category 4 hurricane, leaving local residents and workers with precious little time to evacuate before Harvey came ashore around 3 a.m.

Port Aransas, a barrier island near Corpus Christi known for its fishing, beaches, and Spring Break festivities, was decimated. The bulk of its businesses and homes were damaged or destroyed by the 130mph winds. The mayor estimated anywhere between $500 million and $1 billion worth of damage.

Two years later, businesses and homes are still rebuilding and making repairs. One such establishment still dealing with recovery efforts is the University of Texas Marine Science Institute (UTMSI), which suffered extensive wind damage during Hurricane Harvey. The facility recently received funding from both the U.S. Department of Commerce's Economic Development Administration (EDA) and the National Oceanic and Atmospheric Administration (NOAA) to aid in its recovery efforts. 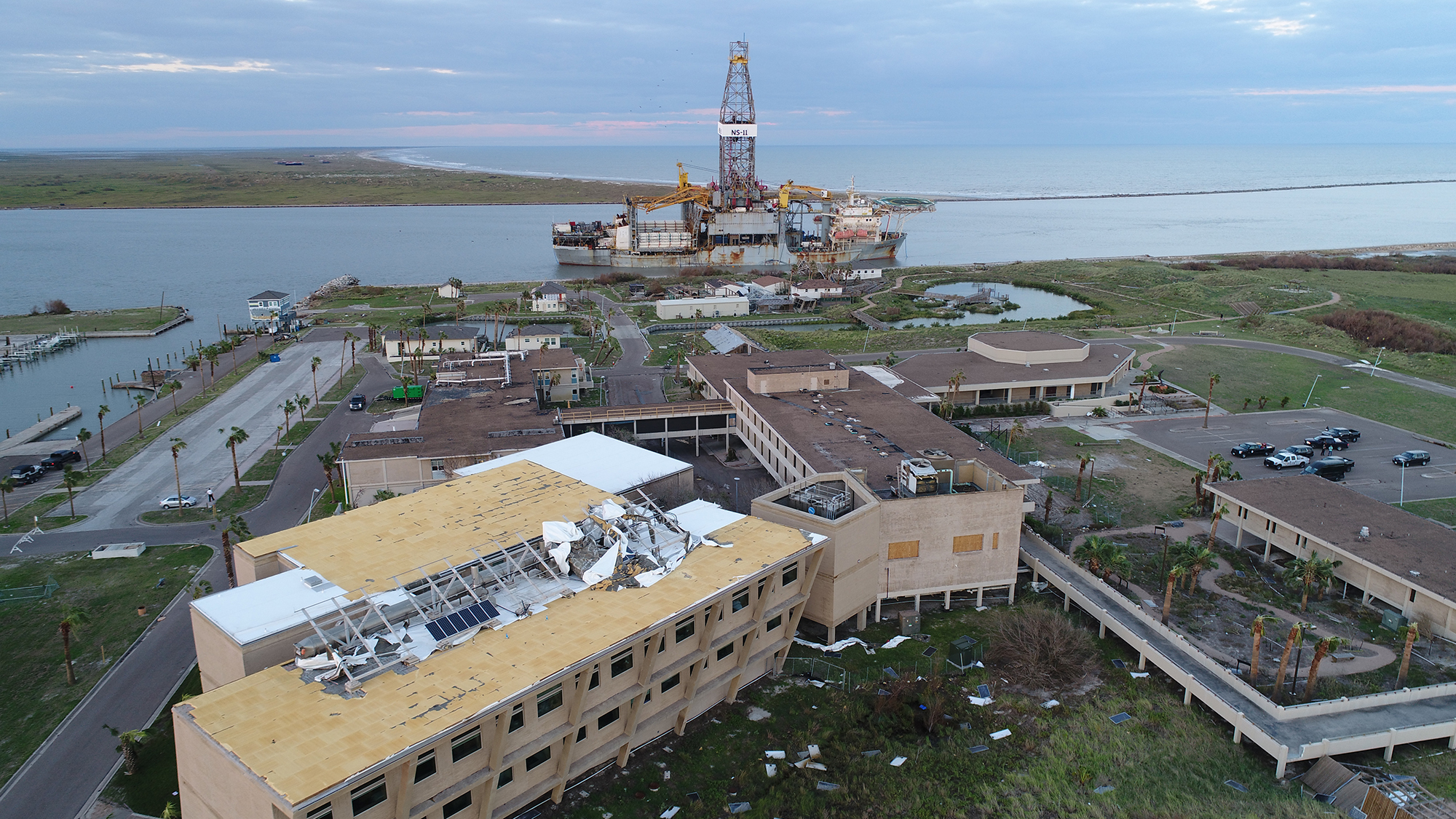 The UTMSI after Hurricane Harvey struck in August 2017.CREDIT: UTMSI

Sally Palmer, Communications Coordinator at UTMSI, said that the facility’s labs were located in different buildings in Port Aransas, Rockport, and Fennessey Ranch in Refugio, which all suffered varying magnitudes of hurricane damage. The damage totaled about $45 million.

Since Port Aransas was on the edge of the hurricane’s eyewall, Palmer said, “it destroyed not only the labs but also the infrastructures that support the labs—for example, a pump house. We didn’t have a mechanism to get new seawater to some of the tanks.”

“One building had a complete roof failure,” continued Palmer, noting that “a lot of sensitive instruments and millions of dollars’ worth of instrumentation” were destroyed. About three football fields’ worth of roofing has since been replaced.

“We had a mandatory evacuation, so everyone in Port Aransas was supposed to evacuate. [Staff members] evacuated throughout Texas and some of them did take samples with them if they could ... for some it just wasn’t feasible. People took as much as they possibly could in a short amount of time,” said Palmer.

In times of crisis, neighbors and communities tend to reach out to each other to offer help, and UTMSI and its colleagues were no exception.

“One professor had five people staying with him,” said Palmer, describing how employees worked together to figure out where people could find temporary shelter. She also said that many UTMSI researchers were contacted by colleagues to offer assistance so that they could house their specimens and continue their work.

“We worked with Texas A&M-Corpus Christi across the bay. They offered laboratory space over there, so our students and faculty were able to work out of their labs and offices for about six months,” she said.

The importance of a disaster plan

UTMSI did have an extensive safety and disaster plan in place prior to Hurricane Harvey’s landfall. However, the storm was so unthinkably catastrophic that the damage just could not be helped.

“We do have a hurricane/severe weather action plan that we implemented … but the thing about Harvey is that it went from a Tropical Storm to a Category 3 to a Category 4 in 24 hours,” said Palmer. “The intensification was so rapid. We were prepared as much as we possibly could be, but the storm was so large.”

“The severe weather action plan we had in place did work. It’s just that the storm was so intense, and we have older buildings that had roof and window failures,” she added.

Palmer said that some of the first people on the scene once the storm had cleared, after firefighters and police and other first responders, were there to assess the damage to the labs.

“After a storm, the environmental health and safety officers are some of the first responders and they go through the laboratory first to make sure there are no chemical spills or anything of that nature,” she said.

The damage to the UTMSI facilities was due to wind. Windows were shattered. A research pier was smashed when a drilling rig ship got loose and collided with it.

“We did lose a lot of samples … from freezers going out,” continued Palmer, noting that some fish in the labs did not survive. “One of our generators failed, and it took us a while to get back on the island and get the external generators up and running.”

Palmer noted that none of the lab buildings were torn down following the damage from Harvey, but the casework was gutted in about 75 percent of them. The rebuilding team tried to utilize more resilient fixtures, flooring, and casework during the renovation efforts whenever possible. Pea gravel roofing was replaced with modified bitumen roofing, since the hurricane winds sent the gravel shooting through windows like projectiles.

“We put in epoxy flooring, which is a little more resilient to any water intrusion,” she said. “[We put] casework on casters, which are a little more mobile and functional. We replaced almost all our windows with hurricane-resistant windows.”

Prior to Harvey, UTMSI received tens of thousands of visitors per year. The visitor center has been closed since the storm, but Palmer said that they hope to re-open it soon. They are also working on dormitory space for visiting students. Housing, she said, was the institute’s first priority following the storm, especially since it occurred so close to the beginning of the fall semester.

Crucial to minimizing the damage, Palmer said, was having a support system ready and waiting to help.

“UofT has a disaster response contractor on standby,” she said. “They were here as soon as the first wave of first responders had come through. They set up generators, temporary roofing, put up drywall—we didn’t have the mold issue that many places had. For any sort of lab that is doing some sort of disaster plan, that’d be really important to factor in.”

Palmer says that she’s happy with the results of UTMSI’s severe weather plan being implemented, since all humans and many animal specimens were able to evacuate to safety. She noted that the lab’s emergency plan has basically stayed the same since then, but employees have been surveyed to ask what could be changed or added following their experience with Harvey.

“I think the staff and faculty will pay a lot more attention now and follow it to the letter,” she said. “A few things they didn’t do were minor, but could’ve been done better.”

“We added in a recovery piece—before we just had ‘how to prepare for a disaster,’ but we didn’t have anything for afterward, so that’s what we beefed up. Who you call, things of that nature.”

She stressed that an essential part of a lab’s safety and disaster recovery plan should be to reach out to local government and security officials and get to know them prior to a natural disaster.

"I think it’s really important to establish relationships with the local community, in terms of the city council and police force, because they’re the ones that are calling the shots after the storm. To whatever degree you can be in the know … I think it helps everybody,” said Palmer.

She also added that the environmental health and safety team that came in following the hurricane was extremely important, as was the University of Texas police force.

"That was really helpful because the island was fairly desolate and they helped provide extra security. That freed up the city’s police system so that they didn’t have to worry about it. They were dealing with a lot of personal property and safety issues.”

In terms of building features that could help a facility survive a natural disaster, Palmer said, “Ensure the envelope is as strong as it can possibly be.” That, combined with the newer buildings’ hurricane windows and the fact that many labs were on the second floor of the buildings, helped prevent even more damage, she said. 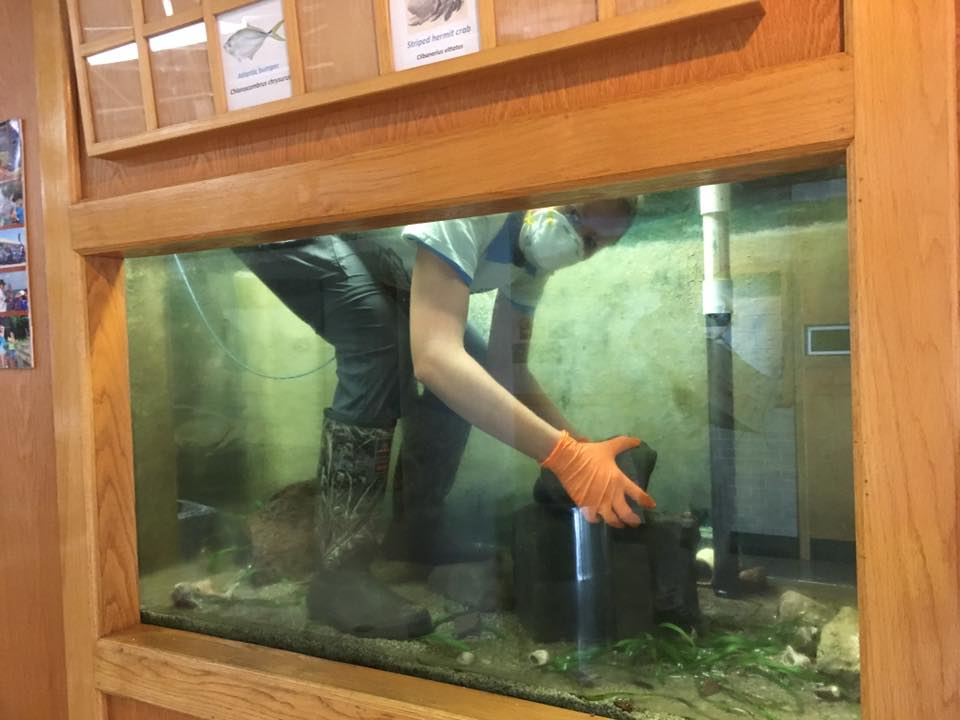 Palmer also stressed that having photodocumentation for equipment and supplies is an absolute must. (UTMSI is still dealing with insurance claims two years after Harvey’s landfall.) She encourages lab managers to store this information on the cloud, along with floor plans and information about the facility’s electrical systems and transformers, so that they can be easily accessed from a remote location following a disaster. She also advises that labs ensure that multiple people, not just one, are aware of where these resources are and know how to access them if needed.

Palmer added that flexibility and a willingness for staff members to pitch in is also vital to a lab’s recovery efforts.

“Being able to be flexible after the storm was super important, so we had our director here and a core team really working day and night to assign [tasks]. People were doing stuff they don’t normally do. A researcher started doing facilities management, and it continued after the storm. Having the flexibility to give people tasks they’re capable of but not familiar with is important—and have a well thought out severe weather plan.”