Natural disasters such as earthquakes, floods, and hurricanes can wreak havoc on infrastructure. The University of Texas at San Antonio’s College of Engineering, which conducts research on such matters in order to minimize and repair damage, needed a facility where it could test the structural integrity of systems and components in a realistic setting. When working with projects involving things like bridge and building components, size truly matters, as small-scale models can affect the integrity of the research. Therefore the university set out to create a facility where structures can be accurately tested at 100 percent scale.

A ribbon cutting for UTSA’s Large-Scale Testing Laboratory was held on Oct. 3, 2019. This 15,000 sq. ft. building, at a height of 50 feet and a cost of $9.95 million, hosts students and researchers from UTSA’s department of civil and environmental engineering, as well as private engineering firms who have partnered with the university in order to test their structures at full scale. The department of civil and environmental engineering’s research has led to innovations in the fields of landslide prevention, natural disaster recovery, creating drinkable water from rainwater, and harvesting energy from hot pavement. 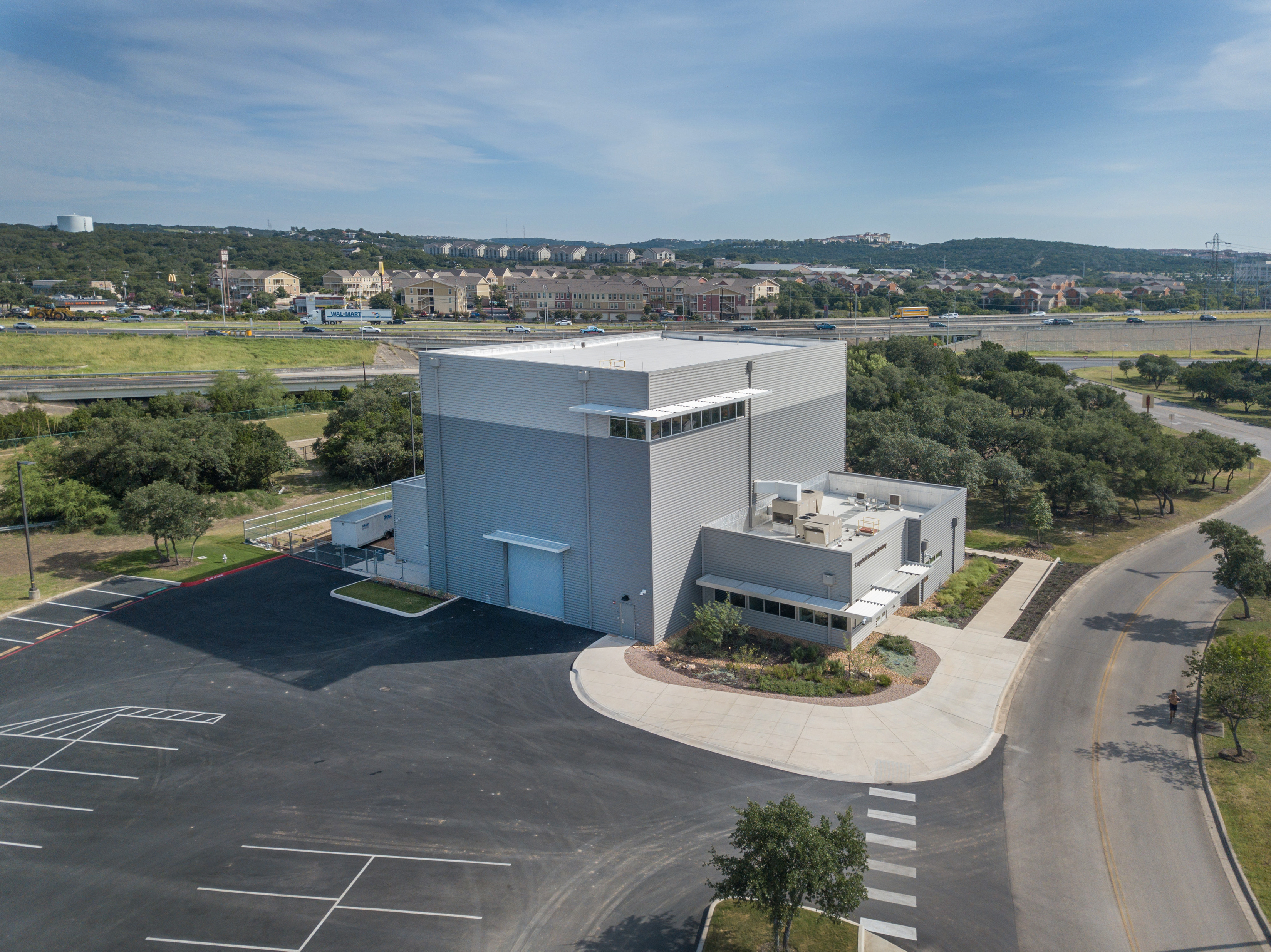 The facility can accommodateWS many different varieties of geotechnical and structural engineering projects. Two cranes, each able to load, unload, and transport specimens of up to 30 tons, are located in the building. There is a 40-foot clearance between the reaction floor and the bottom of the cranes, so structures up to four stories tall can be tested.

“The lab was a unique endeavour for us,” says Adolfo Matamoros, Ph.D., FACI, P.E., Peter T. Flawn Distinguished Professor at UTSA, in the department of civil and environmental engineering. Noting that it’s only his second time building and designing a lab, Matamoros adds, “There is no code book—you sit there with the folks that do calculations and compute forces and capacities.” 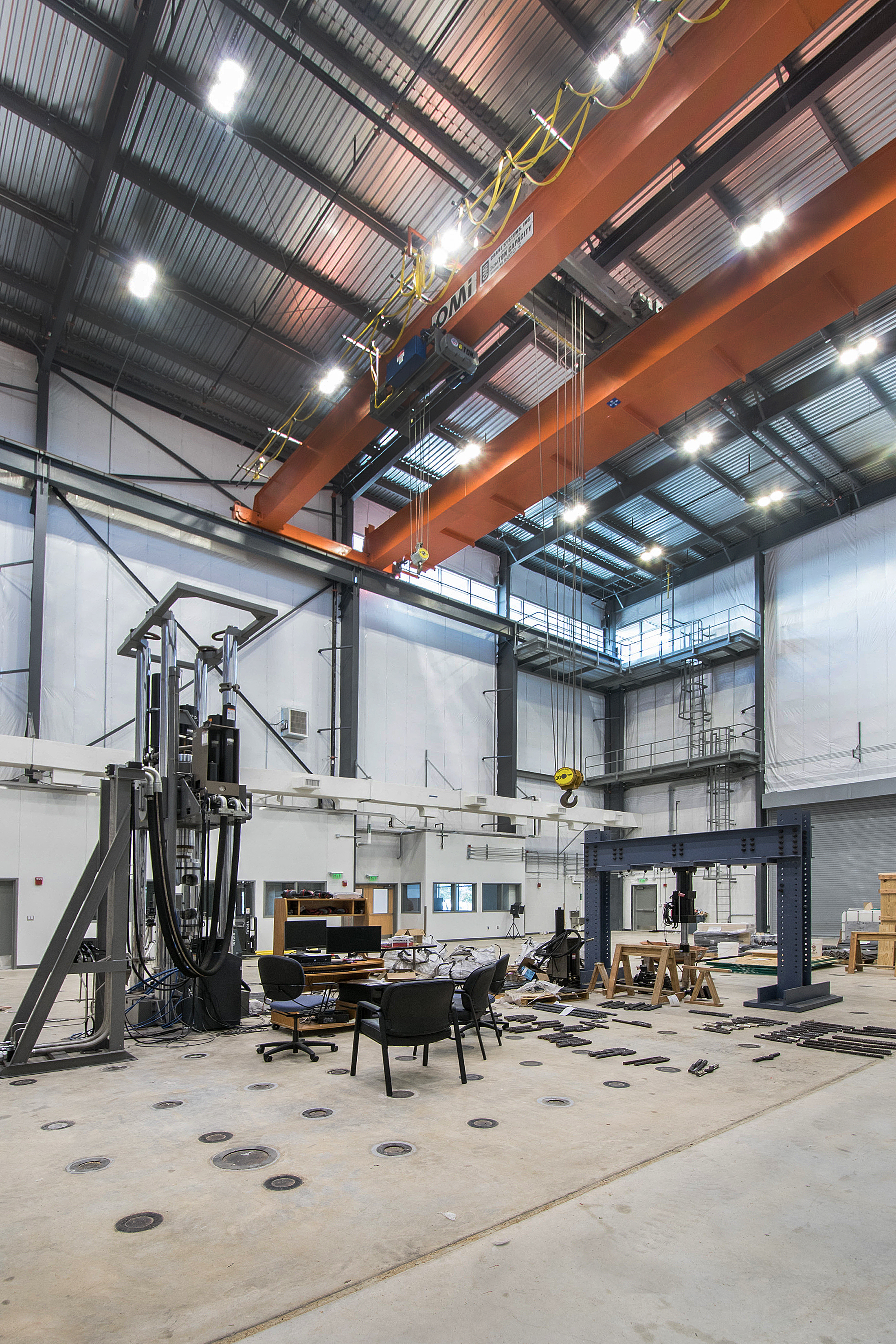 The cranes inside the Large-Scale Testing Laboratory.CREDIT: UTSA

The facility design includes a 40-by-80-foot reaction floor, with a thickness ranging from three feet to five-and-a-half feet, which allows researchers to test structural systems and components at their actual size. The reaction floor is able to withstand test loads of up to four million pounds of force, meaning that this is one of the highest reaction floor capacities in the U.S.

“We tried to develop a facility that has unique features to test very large loading capacities, thinking that our interests and our focus is going toward testing elements, components, and structures as close to a real scale as possible,” says Matamoros. “We’ve learned over the years that when you use small-scale specimens, you give up something. When things get projected out to the real sizes, you may end up with unconservative estimates of their strength. You think you have stronger structures than you actually have in real life. When you test in smaller sizes, you get the impression that things are stronger.”

“Many of us would like to build as large a facility as possible, but when you design it you have to make choices,” he adds.

Matamoros says that the Large-Scale Testing Laboratory takes the place of a former lab, which was just 400 gross sq. ft., and that the new building is “a very welcome change from the perspective of safety.”

“UTSA had a small structures lab—it had some major deficiencies. It didn’t have a crane. The way the campus grew, the access door was blocked off so it was very difficult to do deliveries to the new lab. [There were] safety concerns for the students,” he says. “All the tasks that were seemingly impossible in the old facility are very, very easy to do right now.”

The Large-Scale Testing Laboratory has a large-capacity hydraulic power supply and high-pressure distribution lines with access manifolds in the service chase. This means that  servo-controlled actuators can be used anywhere on the test floor, for researchers to simulate situations such as high-cycle fatigue, blast loads, and natural disasters like earthquakes.

Matamoros notes that these systems had to be carefully considered when designing and constructing the building.

“One of the challenges is that we are over an aquifer, and we had to be very careful since we’re operating with hydraulic power units and hydraulic oil. We designed the lab in and of itself to be a containment vessel,” he says, adding that the design of the facility enables spills to be collected in the basement and the ground floor so that they can be collected and disposed of safely. Systems such as air outlets and hydraulics are done underground, to prevent tripping hazards due to hoses and cables.

“You have to put a lot of thought into your day-to-day operations and focus on how to make the environment as safe as possible. We did spend a lot of time thinking about how do we make it work everyday. It really helps for people who have experience in this type of work to be involved in the design process. That aspect of this lab was the subject of hours of discussion in planning meetings,” Matamoros says. 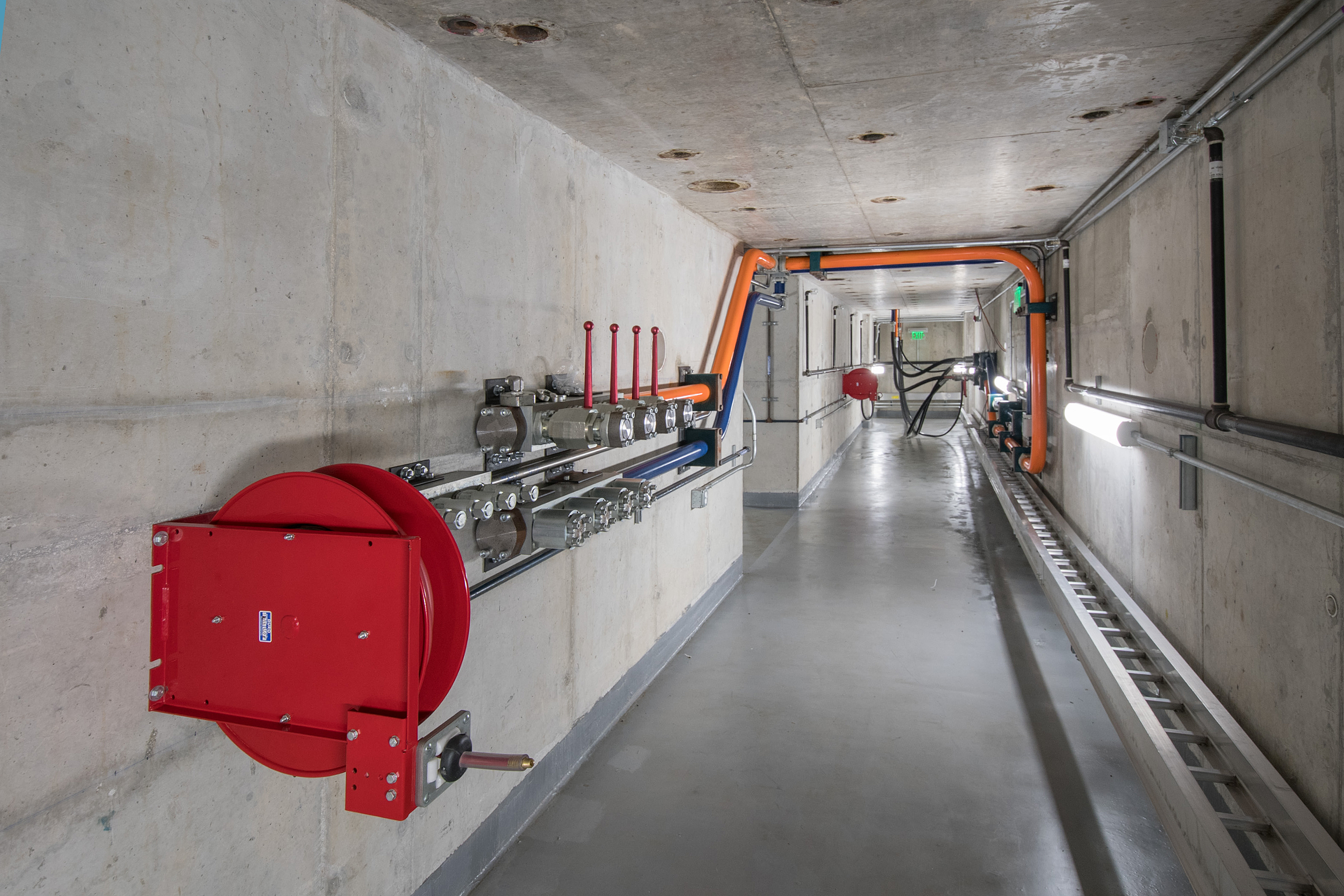 The underground facilities of the Large-Scale Testing Laboratory.CREDIT: UTSA

The placement of the facility on campus was also carefully thought out, due to the extreme size of the equipment housed in the building, as well as the methods necessary to get it all there. Large semi trucks need to haul massive objects to the facility’s warehouse, which of course means traffic. The Large-Scale Testing Laboratory was therefore placed on the west side of campus, away from the main teaching locations and on the edge of the dorm facilities, Matamoros says.

“In that respect I think it was a very non-intrusive construction process because we were way out of everybody’s way,” he says, adding that the future of the building also plays a role in its location.

“I think that part of the thought was the university has other facilities that would be a good fit in that part of campus. That’s why they put us over there. We’re sort of in a corner of campus and have room to grow and extend our capacity in the future.”

Matamoros says that the facility took approximately a year to finish, and that the project team’s expertise helped to make it a smooth operation.

“They were very, very fast—our contractor did a really good job. Of course it helped greatly that we were working with a contractor that had experience building this type of facility. They understood the challenges and they were very proactive from day one,” he says. “A strong word of advice is to get closely involved and work with them, because it [makes] for a very seamless process in the construction of the lab.”

“The other thing that I would say to people ... is to try to think about what is it that you can do uniquely in your lab. So that when it comes to allocating resources you can focus on creating something new,” he adds, citing the unique reaction floor as an example. 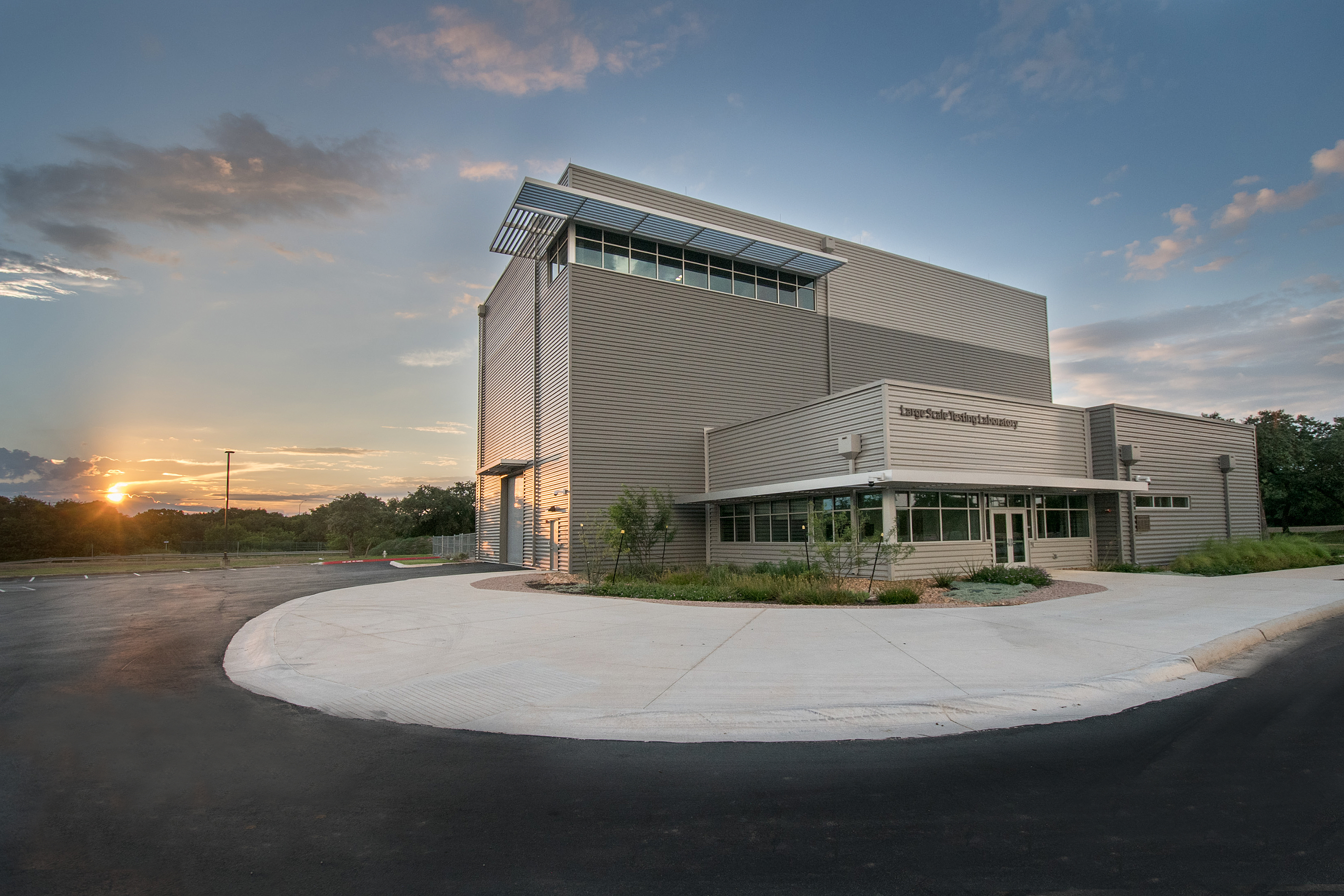 In Texas, he continues, “we’re constantly pushing the envelope.” He notes Texas’s reputation for making everything “bigger” as part of this strategy, along with its resilience after being hit with natural disasters such as hurricanes and floods. He also says that collaboration with Texas-area industries such as aerospace as well as oil and gas played a large role in the creation of UTSA’s Large-Scale Testing Laboratory, and that other labs should look to their surrounding areas to come up with their own unique plans.

“Let’s build a facility that can be a home for the type of research that is needed for all those areas,” he says.