How can business leaders and local entrepreneurs best come together in order to jump-start a struggling state economy? The University of Connecticut’s answer: construct a new science building.

The Innovation Partnership Building (IPB) was developed in order to facilitate partnerships between academia and local industry, as a boost to the State of Connecticut’s economy. The facility is immediately north of UConn's main campus in Storrs, Connecticut. It was officially opened in a ceremony held Sept. 20, 2018. It is targeting LEED Silver certification.

“The State of Connecticut envisioned a new tech park adjacent to the UConn campus in Storrs as an opportunity to bolster the state's economy and be a catalyst for innovation and new job growth and creation,” says Scott Habjan, associate director at SOM in New York and senior design architect for the IPB project. “[It’s an] opportunity to work as a new model for students to get hands-on experience basically without leaving the campus.”

“There were much more traditional opportunities on campus afforded to students in terms of co-ops and internships; everything else would involve leaving the campus, so this was a new opportunity,” adds Habjan.

“Another challenge was the fact that since this is an entirely new undertaking for UConn, there was little to compare it to,” says Habjan. “There was a lot of conversation and debate about what should be going into the building—conversations we had with potential industry partners, speaking to them about ‘what would attract you to this building?’, what sort of core labs, opportunities—so that helped to shape the program.”

The IPB—at 115,000 sq. ft. and a cost of $102 million—is designed as a “machine in the garden,” surrounded by woodland walking trails. The structure boasts a “floating” upper lab volume, which offers picturesque views of local woodlands and the hills in the distance. The building is arranged in three parts: a wet and dry flexible-use tenant laboratory and incubation volume; a high bay advanced manufacturing and additive materials wing; and an advanced characterization laboratory wing featuring one of the country’s most advanced microscopy centers. 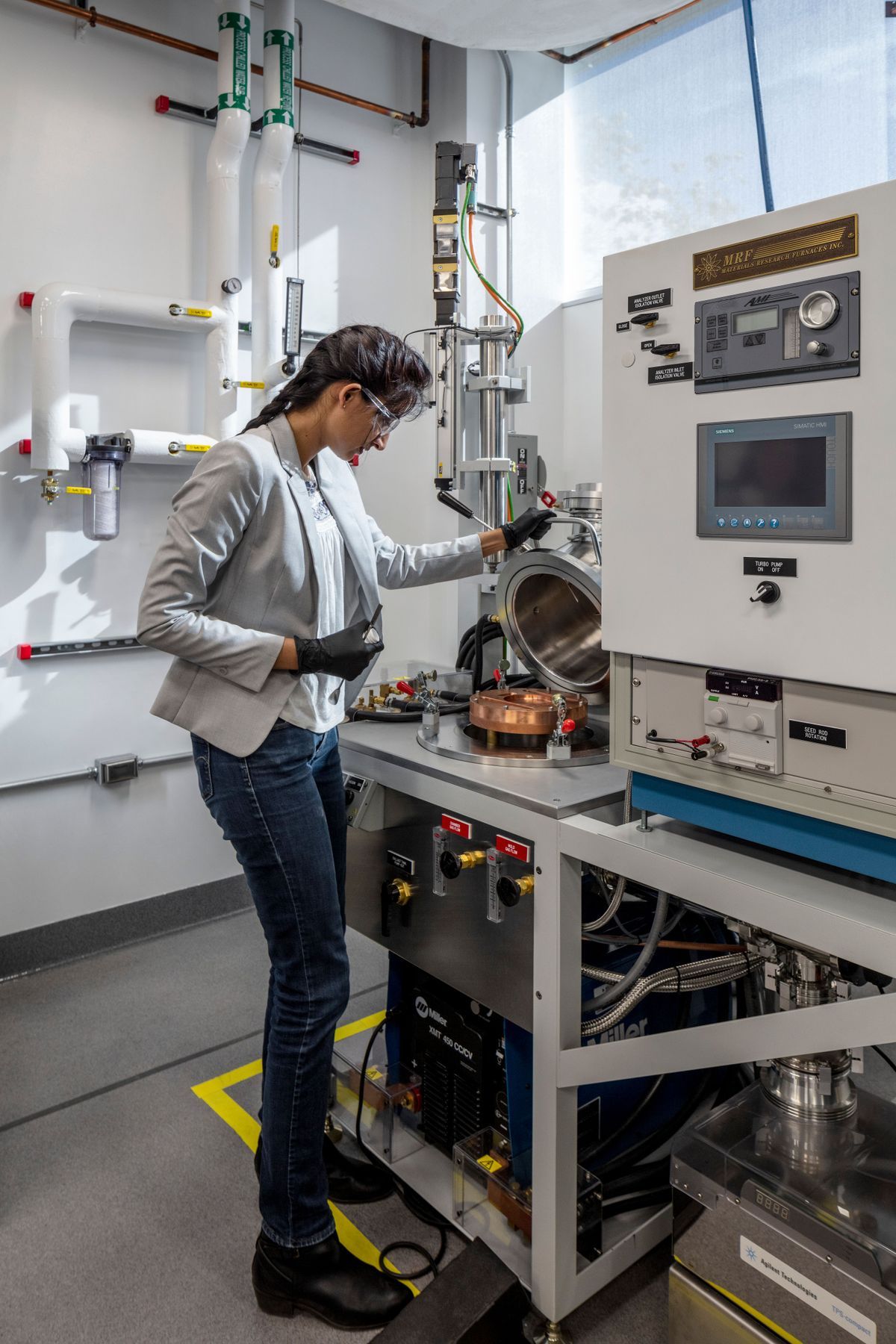 The lobby serves as a connection between the tenant labs to the specialty labs. It is decorated with a Sol LeWitt wall painting and contains a café, lounge, and meeting rooms. The lobby will be used to host events that will exhibit the work being done in the IPB, and in Technology Park as a whole.

“This is basically a tenant laboratory, sort of a core and shell laboratory, with a set of core labs provided; so the idea was that there's an opportunity for different industry partners to come into the building and fit out their own space as they like,” says Habjan.

“Core labs serve as magnets to pull the industry in, providing these rare tools. For example, in this facility [there] is a state-of-the-art—perhaps the most advanced in the country—imaging center. That's one of the attractors to the building,” he adds.

“There was sort of an interesting challenge in that they wanted to create a sense of space or place on campus, and yet it's a relatively modest sized building,” says Habjan. “In addition to the core labs or tenant space, we basically leveraged the site as a way of creating additional opportunities for outdoor teaching, places of collaboration and respite. And that's reflected in that there are balconies in the building—students can go out there and either relax or have informal meetings. There is a courtyard for events as well as a space actually underneath a portion of the building which is sort of an indoor/outdoor space used for events and outdoor teaching.”

Habjan points out that the building was planned before its final occupants were known, so the project team utilized a flexible design and made the necessary changes as the project progressed. “During the course of the project it was initially envisioned just as a core and shell building. The building was under construction and we were designing the interiors for a good portion of it,” he says.

Industry partners also had a voice in the project plans, says Habjan. The original plans for the IPB included a cleanroom, which was eventually scrapped when the project team realized it would wind up spending a sizable amount of money on a lab that wouldn’t be used frequently enough to justify the effort or expense. Since the goal of the IPB is to revitalize the local economy, a cleanroom wouldn’t fit into that plan since the local economy doesn’t include enough industries that would utilize a cleanroom.

The project team was aware of the pressure it was under to build a cost-effective building, especially considering its original purpose. The state’s economy has been stagnant for about a decade, due in part to local talent instead choosing to work in nearby Boston or New York City, which offer more resources and jobs. Connecticut lacks very large cities of its own—its most populated city is Bridgeport, with about 144,000 people. “Part of the motivation for the project was to encourage job creation and spur the economy of Connecticut. The economy was sort of sputtering at the time this project was starting up,” says Habjan, citing the university’s concerns about the amount of money being spent on the IPB. “We actually wound up reworking the building and bringing it in under budget.”

Flexible plans for a promising future

The Innovation Partnership Building is the first of several planned buildings in UConn Tech Park. The university and project team hope that this unique approach of hands-on learning will not only bring in top talent, but will provide graduating students with the resources they need to stay in the area and establish fruitful careers.

“There is a very diverse program inside the building. You've got this advanced microscopy center which requires very stringent vibration criteria, and within the same building you've got high lab space where there might be construction going on. That basically informed the organization and design of the building into putting those two different components into two different wings,” says Habjan. He adds that the vibration-sensitive wing of the building presented a challenge because of very poor soils adjacent to wetland type typography. “This required very deep piles, very tightly spaced, in order to achieve the Vibration Criteria I which we were going after,” he adds, recounting a situation where technicians arrived to test the space and thought that their machine was broken because it wasn’t picking up any vibration at all. “Our Structural team at SOM is accustomed to super tall towers and buildings in seismic zones, and we certainly have the right team for that.”

Habjan says that UConn’s IPB will hopefully serve as an example to other institutions looking to establish a similar, hands-on approach to scientific study.

“There seems to be a trend going—this idea of innovation centers—and this building is certainly a part of that new typology,” says Habjan, commenting that other institutions have asked to tour the building to see what it’s all about. “It is, in a sense, a new typology, and you want to provide flexibility to be able to accommodate where the changes are going to be coming down the road. Basically when you design a lab facility like this, you're setting the stage for certain things that you know will happen in terms of the science, but you need to make room for improvisation and innovation that will happen in the future. And I think that’s something this building does very well.”

From Blueprints to Buildings: How Labs Get Documented, Permitted, and Built: Part 1

From Blueprints to Buildings: How Labs Get Documented, Permitted, and Built: Part 1