According to the Laboratories for the 21st Century (Labs21) program, a joint program of the U.S. Environmental Protection Agency and the U.S. Department of Energy, research laboratories are one of the most highly energy intensive building types, often using four to six times more energy per square foot than a typical office building. Research facilities with specialized areas, such as cleanrooms and vivariums that require large process loads, can consume as much as 100 times the energy of a similarly sized institutional or commercial structure.

The TLC Peak Institute was the energy performance consultant to the design team for the Georgia Institute of Technology’s Krone Engineered Biosystems Building (Georgia Tech EBB project). Having been awarded the prestigious AIA COTE (Committee On The Environment) Top 10 Green Projects of the year in 2018, the building is considered one of the best examples of sustainable design in the US. 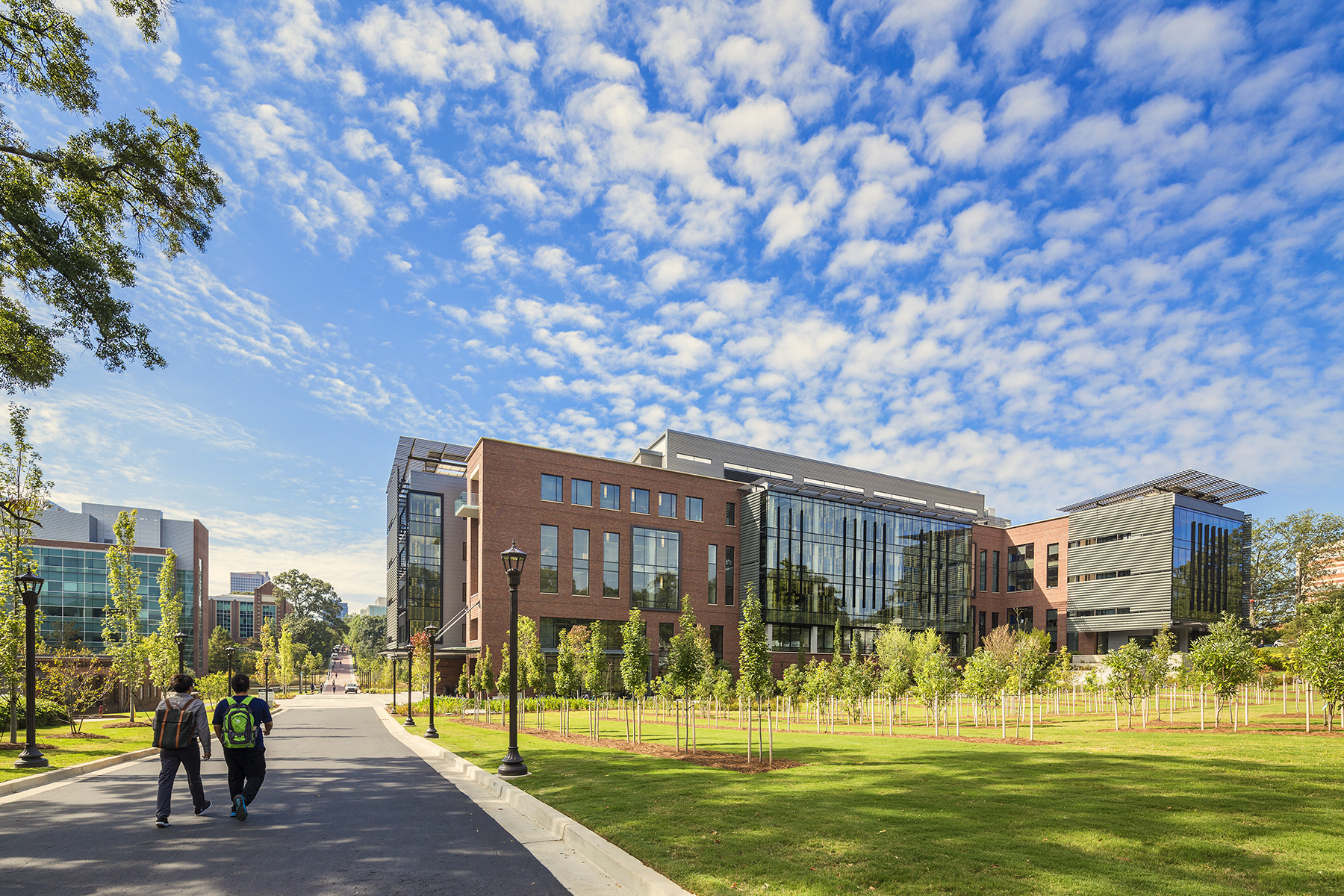 The 218,880 sq. ft. LEED Platinum project challenges the silos of traditional laboratory design by creating a system of open lab neighborhoods that foster engagement. A departure from traditional lab structure, which typically prescribes adjoining rows of partitioned lab space throughout a building, the “cross-cutting lab” implements a program with continuous unobstructed working lab space running down the spine of the building, with offices, meeting rooms, and breakrooms and restrooms in the wings. Daylight, views to the outdoors, and other biophilic elements are used throughout the program to encourage interaction. The energy performance consultant team has developed a guide highlighting insights into the challenges, solutions, and key considerations to optimize energy modeling strategies to optimize success.

All too frequently, energy modeling is not begun until well into design development of the project, which is too late in the process to be able to incorporate design alternatives that could reduce energy consumption. Clients and architects are hesitant to bring in energy modeling experts and spend consulting dollars on multiple concepts, thinking it a waste of money. It is important to remember that while an architect may have 50 different architectural and programming concepts, from an energy performance and modeling perspective, most options fall into three to four modeling scenarios. Early energy modeling during the conceptual design phase allows the design team to take advantage of simple adjustments in building orientation and massing to drive down the building energy demand before beginning the process of evaluating the most appropriate and efficient solution to meet that demand. For the Georgia Tech EBB project, energy performance consultant’s role was to bring the disciplines together to evaluate and analyze progressive sustainable strategies and technologies.

During an Integrated Design Charrette (IDC) held during the concept design phase, the entire design team, including client stakeholders, was challenged to think in unique ways about how to achieve aggressive sustainable design goals in a technology-intense building. This included strategies that addressed daylighting, energy usage, site ecology, and water use. The energy performance consultants provided energy modeling to evaluate multiple building massing and HVAC configurations, determining the relative impact of different energy conservation measures against the ASHRAE 90.1-2007 Baseline model. Labs21 Environmental Performance Criteria were used to benchmark data from existing labs and establish the design target of being in the lowest quartile for energy use. Ultimately, Georgia Tech chose to implement active chilled beams to minimize energy for heating and cooling. Model efforts achieved 26.75 percent cost savings over baseline model. 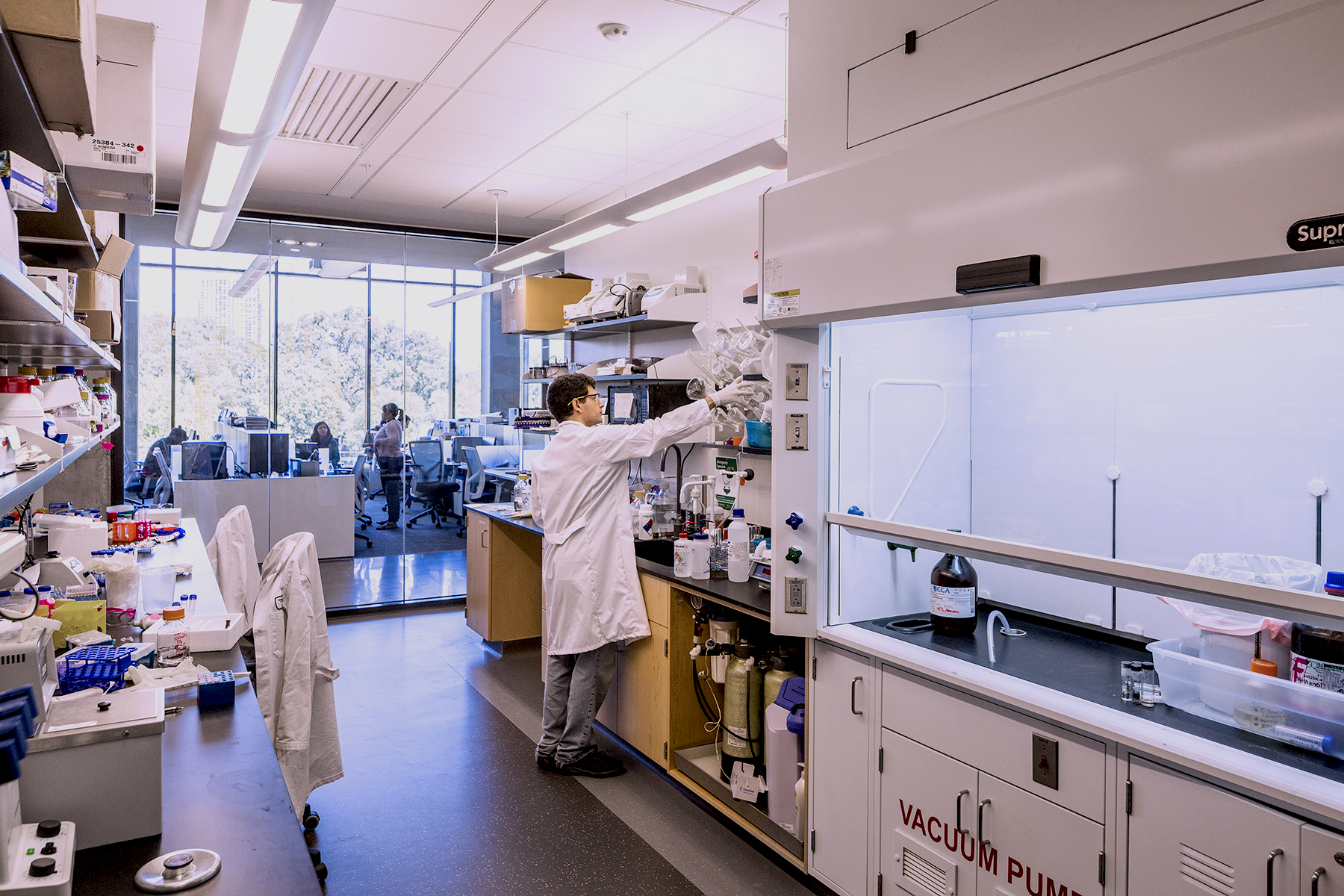 From a thermal standpoint, windows are the most critical component of the building envelope design because they allow 10 times as much heat to pass through them as the opaque walls that surround them. A key design driver for the Georgia Tech EBB project was ensuring that each laboratory space had natural daylight. During the Integrated Design Charette, the energy performance consultants performed energy modeling analysis of different design concepts—overhangs, screening treatments, different fenestration options with the goal of maximizing energy performance, and minimizing glare and solar gain. In the final design, tiny slits in the brick façade minimize heat gain in the west facing windows of support labs. Perforated metal panels limit heat gain during summer months but allow for daylight and views on the east façade.

Although not used on the Georgia Tech EBB project, dynamic glazing is one technology that can be incorporated to balance the performance impact of window-to-wall ratios (WWR). It allows the optical properties of a glazing unit to be changed in order to control solar gain and glare. The type of dynamic glazing most commonly used is electrochromic glazing, which uses an electrical charge from a control system to change the glazing tint state, like transition lenses for buildings. The glazing control system darkens the glass when it receives high amounts of direct solar radiation, reducing the cooling load and occupant discomfort (in the form of glare and direct solar exposure).

After modeling the impact of windows and screening options, the team moved on to modeling the thermal zoning and investigating the laboratory spaces that require higher air change rates as it relates to the solar heat gain coefficient of the glass curtain wall. Because reheat energy is typically the highest energy use in research labs, one way to mitigate this factor is to utilize the passive reheat of the glass by locating spaces requiring higher air change rates to the perimeter. If lab spaces with higher air change rates are moved to the perimeter of the building, this allows an overall reduction in airflow. If office space is put on the perimeter, the glass and resulting glare will add load to the office. Air flow is largely driven by the load of the glass. If a space with a high air change rate is relocated, the minimum airflow is required, regardless of load; the team has to put in that much air. If moved to the perimeter, they can do what they want—as long as load from the glass doesn’t exceed air change rate that needs to be put in there. When not at peak cooling, extra heat will act as passive reheat, making the energy use lower. Although it appears contradictory, the strategy can have a significant impact on energy consumption. The Georgia Tech EBB project ultimately placed the labs in the core of the building with the office/write up spaces along the perimeter allowing light to pass through to the lab spaces.

Impact of climate on HVAC system

The massing options explored included both a single and double bar concept.  An energy model was created during the charrette to assess the relative energy and shading impacts of these concepts against others. The energy model shading analysis is shown below the conceptual massing model.
Arate Communications Consulting, Inc.

Once the building massing and siting was determined, the energy modeling efforts focused on how to appropriately manage the energy impact and load for the HVAC system. By code, laboratory environments require a significant amount of air changes with 100 percent outside air. The energy modeling had to take into account Georgia Tech’s campus location in ASHRAE Climate Zone 3A, which is very hot and humid. While cooling and dehumidifying outside air were significant drivers of engineering design, the winter months were cold enough that heating design was still important. While optimizing the envelope is an important part of reducing energy, the biggest savings is achieved by managing how the outdoor air is conditioned.

Energy modeling was done for different systems, including variable air volume systems, dedicated outdoor air systems coupled with active chilled beams, and energy recovery ventilators. Conditioning outdoor air contributes to a significant energy load for a research building. Based on the modeling results, the team decided to use chilled beams on the project. Not only do chilled beams reduce the amount of reheat, they also reduce the amount of outdoor air required to be brought into the building. As a result, the EBB project’s chilled beams allowed the 100 percent laboratory outside air systems to be downsized from 167,000 cfm to 100,000 cfm, reducing the outdoor air peak load by 40 percent. Chilled beams reduced the amount of fan energy required to push conditioned air throughout the building. This approach also reduced the impact to the campus central plant by 150 tons and was a key component in achieving the building’s energy goals. Energy recovery ventilators were also used on the project, which further reduced the outdoor air load and resulting energy consumption.

During the design charrette, conceptual sketches were created and used for modeling different massing options.  An energy model really can be started just from a napkin sketch.
Cooper Carry

There is an old adage regarding databases: “Garbage in, garbage out.” This can be applied to energy modeling as well. It is important to have a true understanding of peak levels of usage for each department. For example, on a recent project for Vanderbilt University, a month’s worth of data was gathered and reviewed for the different labs that were going to move into a new research facility. It showed that for the vast majority of the day, the equipment load was very low—approximately 1.5 watt/SF—and it spiked once or twice a day for 15 minutes to 4 to 5 watts/SF. Understanding this pattern informed the energy modeling. If the model had reflected the peak usage as the baseline, it would have overestimated the energy consumption and impacted design decisions. This real time benchmark data supported informed decision making and design and engineering decisions that resulted in significant cost savings.

Research buildings are complex and require a design team with a deep bench of expertise. While there are many architects and engineering firms with the expertise to design these facilities, consider including an energy performance consultant early in the conceptual design phase to increase the energy efficiency and lower the operating costs of your facility.