Listening is among the most important skills that planners and architects bring to the table. Fully meeting the needs and expectations of users of a planned building requires asking specific questions about their current work spaces and work processes, to ensure a detailed understanding of what types and configurations of spaces will ensure future efficiency and desirability. But what happens when the future user of the space isn’t there to ask?

Although the lion’s share of Flad’s clients, mostly in the fields of science and research, are seeking to plan, construct, or renovate spaces for specific teams and uses, designing for undefined users is becoming more prevalent. This is a natural consequence of the industry-wide move toward exploratory research and innovation, with the rapid changes in formal research collaborations shrinking the occupancy period for a given lab space.

We see it everywhere, from the creation of university research facilities with broad goals for meeting society’s grand challenges (but without advance knowledge about which of those challenges is most acute or solvable) to the development of properties intended to attract biotech firms (without knowing exactly which type of firm might become the building’s tenant). Certainly, listening remains a key skill in such circumstances. However, other attributes, such as flexibility and adaptability, achieve greater significance when the end user is unknown.

In general, a building designed for undefined users requires greater reliance on benchmarking data and a broader understanding of the general needs of research facilities—asking the organization or the market, in other words, in the absence of known users. Dexterity, in the form of the ability to visualize space whose logic can buttress both specific and nonspecific processes, is vital. The lack of comprehensive information leads to a strange paradox: it can be more difficult to find a comprehensive design solution, and yet easier, since research spaces can be laid out using a more generic logic. 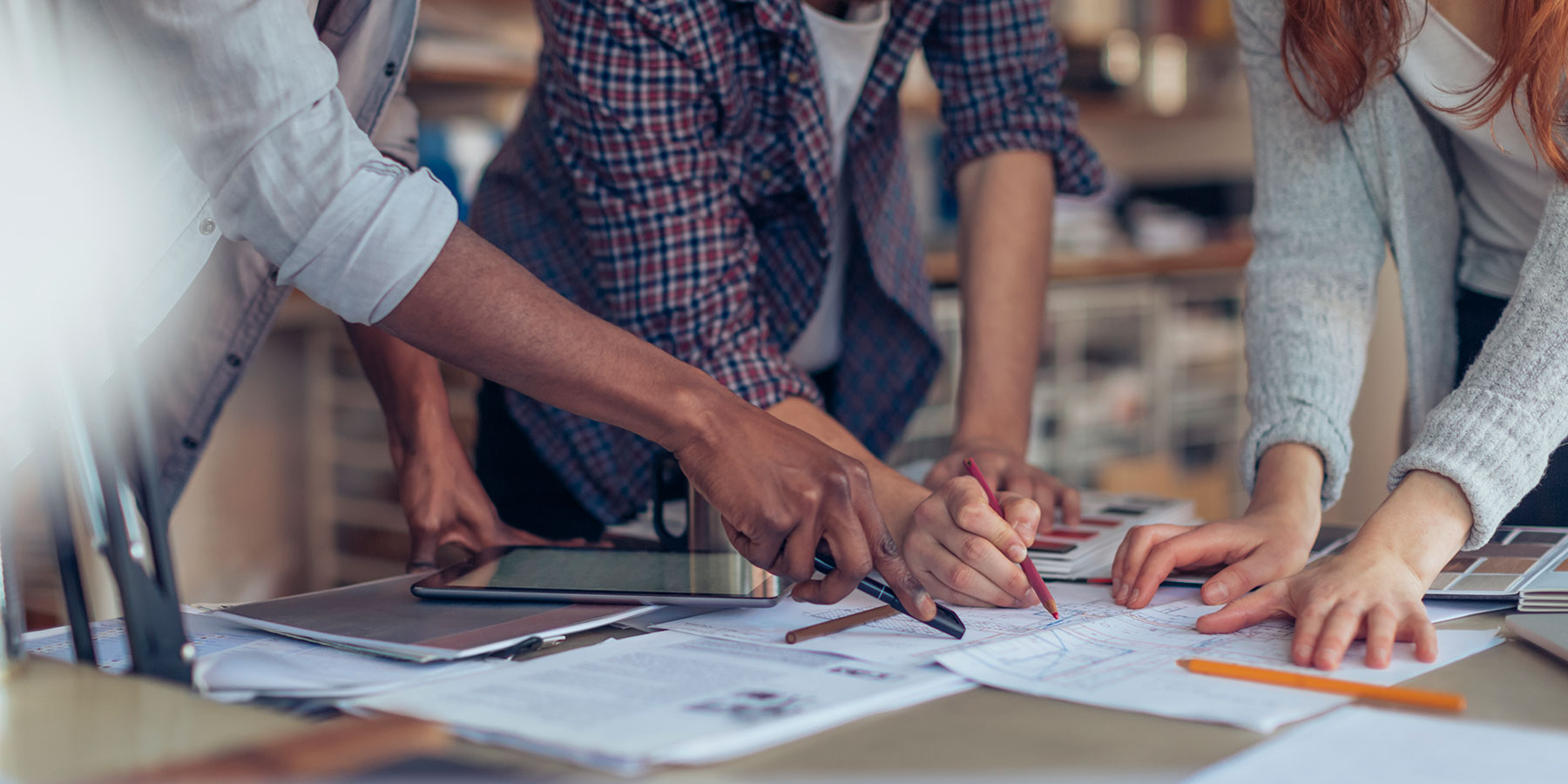 If you were sitting across the table from a team of researchers, you could discover how they work such as the different ways they use their current space to how much working area they require to perform certain tasks. Without their input, however, you would have to rely on benchmarking data—numbers such as room totals and room sizes, compiled from a variety of sources, including your firm’s relevant experience with a similar class of project that would offer insights on space capabilities needed and space types that correspond with specific scientific research needs.

The choice of projects to use as a basis of comparison is critical: looking too far back is less like taking a snapshot of the moment and more like getting a panoramic view of history. In a domain such as science, which is marked by constant change, the now is of great relevance while the past is less so, especially when you consider the years that will elapse during planning, design, and construction of the building. If handled properly—if relevant data is gathered on truly comparable projects—benchmarking can help designers create spaces that meet market demand and even anticipate the trajectory of future building usage.

Complementary information can sometimes be gathered, particularly in academic settings, from the broader leadership; for example, information pertaining to the organization’s current and preferred office culture, its level of and interest in collaboration, and its general amenability or aversion to project cost. Leadership might also be able to shed light on the expected capabilities of the space being planned or the duration that research teams will typically take up residence.

The simple fact is that some organizations prioritize larger goals and initiatives over an individual scientist’s need—for example, an organization may intend to introduce robotics to monitor agricultural needs in the field, rendering competing views superfluous. Some organizations, in their quest for a design crafted to broader institutional goals, will be inclined to place limits on the interactions between the planning team and rank-and-file researchers. In many academic research settings, for example, the dean, department head, and/or associate vice chancellor of research is often the primary source of information on the school’s and department’s needs. While the planning process will be inclusive of many voices and inputs, in this case, few promises will be made by the university or planning team to specific individuals or constituencies. Corporate research clients also tend to place longer-term business goals ahead of the needs of specific employees who may move to another company by the time their new research space has been formalized or completed.

And, a relevant point: circumstances can change suddenly, even with the planning process underway. While a project might begin with limited information, a tenant might be signed to a long-term lease or a highly regarded scientist might be recruited by the university. This can have major repercussions in science facilities; for example, decisions made with regard to plant sciences might necessitate the addition of a large number of growth chambers or an expansive upper-floor greenhouse, adding significantly to the amount of heavy soil and water on the premises.

Sometimes, the institutional knowledge, facility type, and research focus match up perfectly to allow even broader consensus-building to occur, even in situations where the eventual building occupants are not yet selected or known. As an example, the North Carolina State University Plant Sciences Building was conceived as a place where academic, government, and industry researchers can be brought together to find solutions for some of the most pressing agricultural problems of the day. The Plant Sciences Initiative was built around the partnerships between NC State, the state Department of Agriculture & Consumer Services, and the Golden LEAF Foundation, with the joint vision and knowledge that the research occurring there would utilize a grant-based approach. Research teams inhabit space for a finite time period as they conduct specific collaborative work related to solving a definitive problem, before returning to assigned (and potentially permanent) space elsewhere on campus.

Flad’s work began with details about the Plant Sciences Initiative’s goals and a general template put forward by the university that specified three research platforms, two of which appeared to require use as wet labs and one as a dry lab (to be used for informatics). Further preparing for a planning process lacking known users, the university also formed representative user groups comprising what they deemed surrogate users, who were not necessarily linked to the planned building but performed the types of research in the domains anticipated to occur there. From this basic framework, the planning team, after consulting with various research groups at the university, created a modular team metric based on average team sizes and configurations. Space needs could then be estimated, eventually resulting in a building totaling 184,000 square feet. 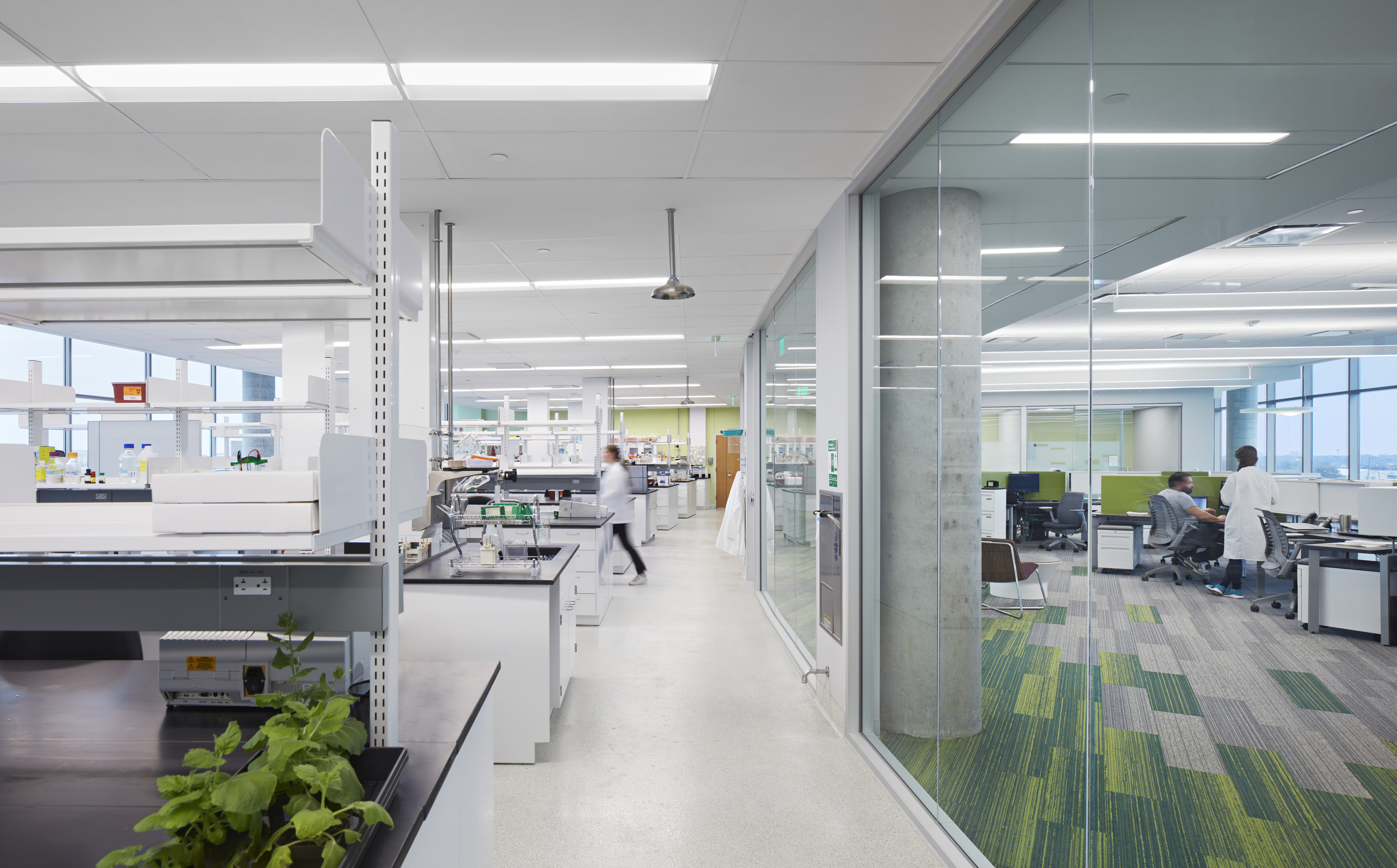 Demonstrating a contrasting approach, Texas A&M, whose AgriLife Extension campuses have a presence in every Texas county and serve primarily rural populations, confronted an atypical situation during the planning of its new, 58,000-square-foot Dallas facility. The Dallas center is alone among the AgriLife locations in focusing on urban agriculture issues such as stormwater management, turfgrass science, and vertical farming; its administrators were primarily interested in creating a facility that could attract and retain top researchers, as well as support and enhance already-robust educational and outreach programs that serve the community. Although only some of the researchers who would use the space were identified during planning, the abbreviated process centered primarily on discussions with three designees, who described the kind of environment they would need to sell the facility as a reason for people—researchers and residents—to come there. The overarching driver, expressed by the program director, was to align the academic research environment with that of their corporate partners. Contributing to this seamless extension was a dearth of enclosed offices, flexible furnishings, flexible lab space lacking interior walls, and shared support space located on the perimeter of the floor rather than directly adjacent to specific bench space.

The need for flexibility

As you can see, the first problem when planning facilities for unknown users is institutional. To whom may planners pose questions? Who are the people authorized to make decisions? Above all, what is the overriding culture of the organization? Once critical decisions are made and ideas transformed into actual, physical space, the organization’s structure and behavior will be the largest determinant of the new building’s ability to meet its users’ needs. As an example, say there is an administrative need expressed to increase facility efficiency, and the team’s suggestion for the space is to move toward open labs. If the organization’s culture is hierarchical, that suggestion might not fly. Worse yet would be the situation where the organization is split on the question and internal conflict results. While a planning and design team can help bring those issues to light, the solutions reside within the institution. 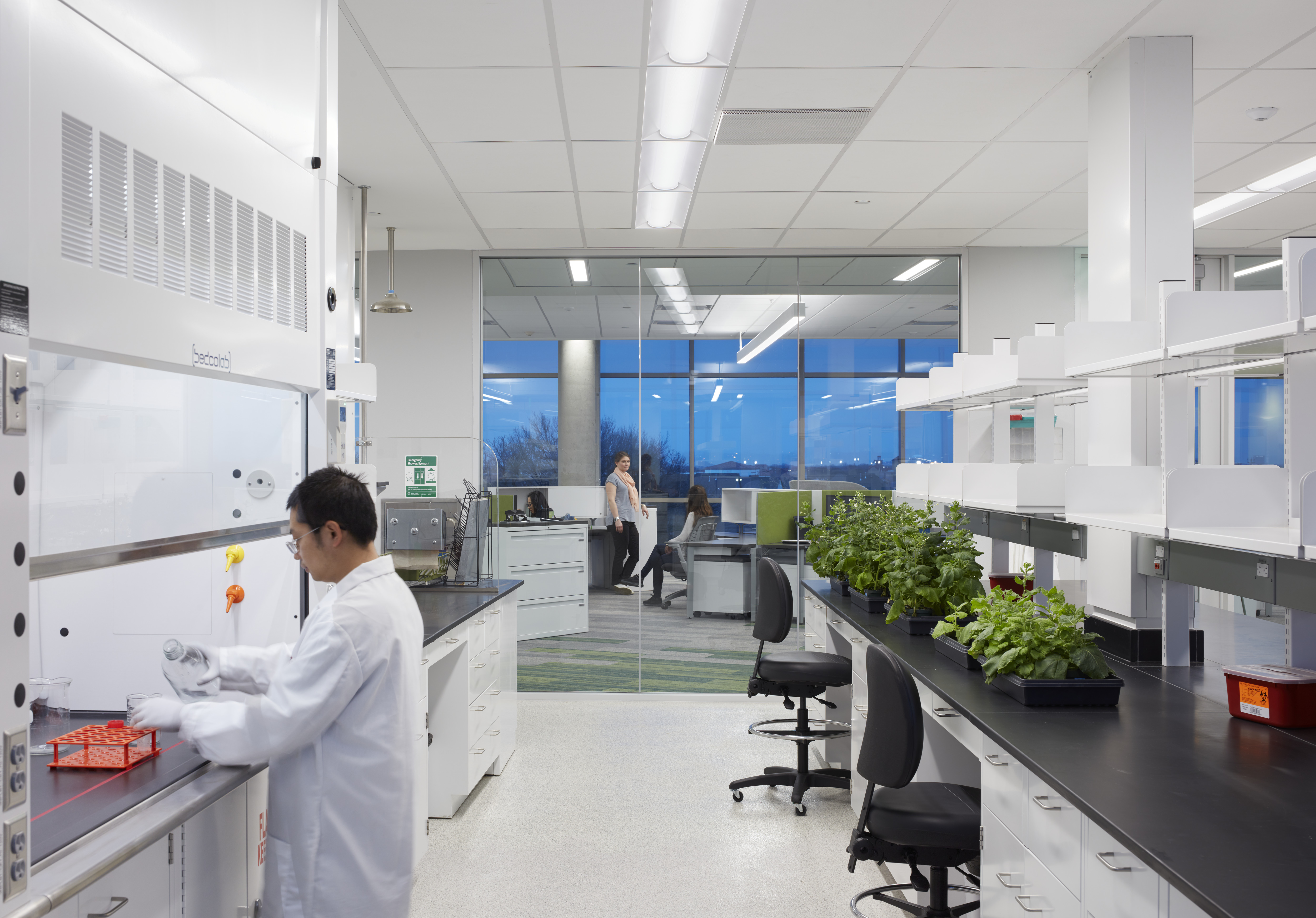 The planning team’s second problem is putting in place the right pieces and arranging them such that future users—whomever they may turn out to be—have space for specialized equipment, that the building is arranged logically, that the building has the flexibility to accommodate research of all kinds, that people and material flows are separated to avoid cross-contamination, and myriad other brick-and-mortar details.

At NC State, a key design move was the creation of a series of what we designated as anchor labs, with each of the five corresponding to a different field of science that might take place within the building in the future. Analogous to more traditional core labs, which often serve an entire campus community (whereas these are intended to serve only the scientific community within the building), the anchor labs are space-efficient and enable the flexibility that makes designing for unknown science groups possible. Other design details are not necessarily planned but result naturally from the realities driving the planning—for example, the Plant Sciences Building includes much less storage space than would typical research buildings. (None of the anchor labs were created to hold an infinite store of consumables because research teams only stay in place until their research has been completed.) In the end, the design of the Dallas AgriLife location featured similar core facilities distributed throughout the building and leaned heavily on flexible lab casework.

One inevitable consequence of the uncertainty surrounding future occupants is that important details and building systems often remain only partially completed until more information is available. Although some of Flad’s clients opt for shell space that can be fit out as needs arise or as companies expand, the more typical treatment is for the owner to withhold some of the building budget, intending to spend it closer to final occupancy. For example (again, from the realm of agricultural science), the knowledge that advanced lighting technology will reach the marketplace later in the year will lead a new building owner to avoid specification of any grow lighting in its otherwise-completed space and only specify conduit up to a point in the building interior so that the newest technology can be fully accommodated later.

Deferring some decisions might not suit everyone, but its prevalence in these kinds of projects speaks to the need for flexibility in the extreme when the future research is undefined. The end goal for planners is to provide one platform for all mechanical and electrical systems that is as broad as possible, and a floor plate that is as accommodating as possible. If planned well, the space will have the ability to serve a variety of research needs and will be reconfigurable as needs change.