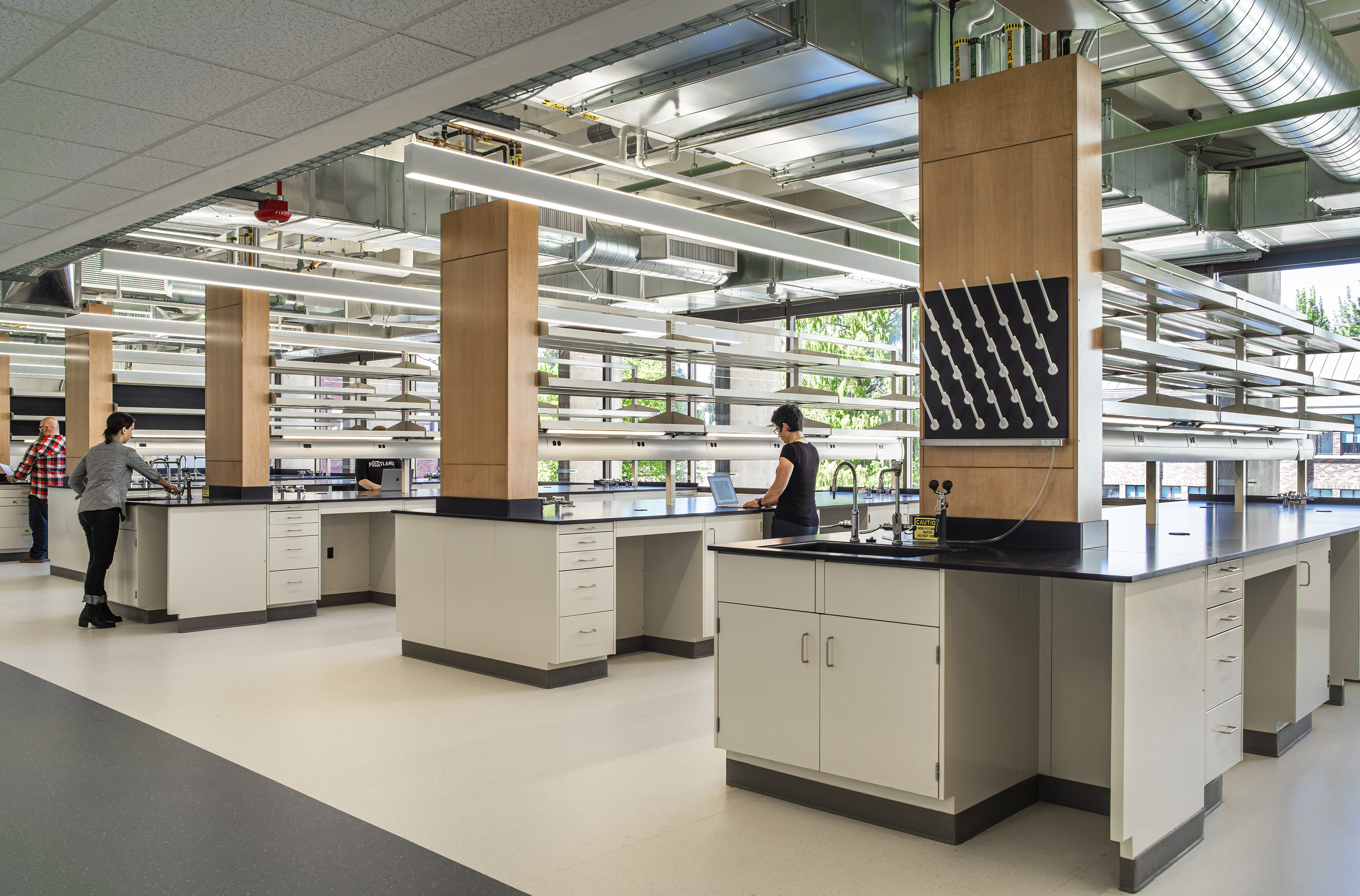 The University of Oregon, located in Eugene, OR, has been utilizing Klamath Hall since the mid-1960s—but obviously science and technology is vastly different today than it was nearly 60 years ago. The original facility was designed as a four-story, concrete frame and waffle slab structure, but the existing structural system wasn’t flexible enough for 20th century science. The outside of the building would remain intact, while the inside would be updated to accommodate modern research and equipment.

“For this project, we were not touching any of the exterior envelope. So our ability to meet the university’s LEED goals was limited to what we could accomplish internally,” says Harley Cowan, RA, LEED AP. Cowan is senior laboratory planner with TVA Architects, the firm that handled the architecture, interior design, and lab planning for the Klamath Hall project. “Exhaust was by far the biggest target for reducing energy consumption, so the new BAS for the top floor is a variable air volume exhaust and make-up air with Siemens controls.”

The project team—which, along with TVA Architects, consists of Mazzetti | BHEGroup (mechanical and plumbing), Equilibrium Engineers (structural), Stantec (electrical and lighting), and Lease Crutcher Lewis (contractor)—was tasked with bringing the building into modern times. The four-story building uses the European convention, meaning that the fourth floor is called the third floor. The project was done in two phases so that the facility could remain operational during the renovation. The KL2 phase of the project, which refers to the biology facilities on the second floor, measures 3,750 sq. ft. and had a budget of $2.4 million. The KL3 phase consists of the synthetic chemistry facilities, and measures 24,950 sq. ft. (whole floor, exclusive of roof which is the same footprint) and was completed at a cost of $18.5 million. The project completion date is October 2020.

“We were tasked with adding 62 fume hoods (of which 54 are eight-foot hoods) to an existing concrete waffle slab building. This involved decoupling the top floor mechanical systems from the rest of the building and doubling the rooftop air handling equipment. Safety and high visibility were priorities for synthetic chemistry,” says Cowan. “This is the first major installation of Novaguard fume hoods west of the Mississippi. The sloping sash gives students better ergonomics than standard vertical sashes and, along with its glass transom and sides like a demonstration hood, adds to the overall bright, open feeling of the lab.”

The new labs have been structured using techniques that improve flexibility, adaptability, and safety, with particular attention on maintenance access and a standardized distribution of utilities in order to provide a consistent safety system in all labs. Student work areas are situated in separate areas from wet lab space, with clear lines of sight into the laboratories. Shared equipment is consolidated using the central core of the building, and large windows situated along the circulation spines offer “science on display,” to enhance user safety as well as provide a boost to student recruitment by allowing them to see what’s actually going on inside the labs. The project also required that the floor be decoupled from the building mechanical systems, and the installation of new supply and exhaust air handlers on the roof.

“This remodel was a necessary update to the top floor for the synthetic chemistry department, which had not been updated since the building was constructed,” says Cowan. “We also developed a new biology lab on the floor below for microbiome research with fruit flies and zebrafish.” Guillemin Lab, a BSL1+ facility on the second floor of Klamath Hall, allows students to work with the zebrafish and fruit flies to study host-microbe interactions in development and disease, to understand how microbial communities and their hosts interact and influence one another. The project team incorporated high cross-lab visibility, and paid careful attention to physical reinforcement of lab practices and protocols, as well as the circulation of clean supplies, glassware, and waste. The renovated lab houses new casework, a modern high-performance fume hood, chemical storage, microscopy rooms, incubation, crystallography, and a dedicated microbiology space. The facility also encompasses offices, a computer room, and 24 student workstations.

Safety is a key feature of the Klamath Hall renovation project, says Cowan, stating that WaterSaver’s new safety center was used at each lab entrance. “The old building had no standard solution for safety devices, particularly eyewashes and showers—each lab had different equipment located in different places. We located each lab’s primary shower and eyewash at the main entrance within sight of the student write-up. Additional eyewashes are at the main sinks throughout,” he says. “The recessed safety center allowed us to congregate fire extinguishers, fire blankets, and first aid kits along with the shower/eyewash unit. So, regardless of which lab one was working, in an emergency, the main safety equipment is always in the same spot.” 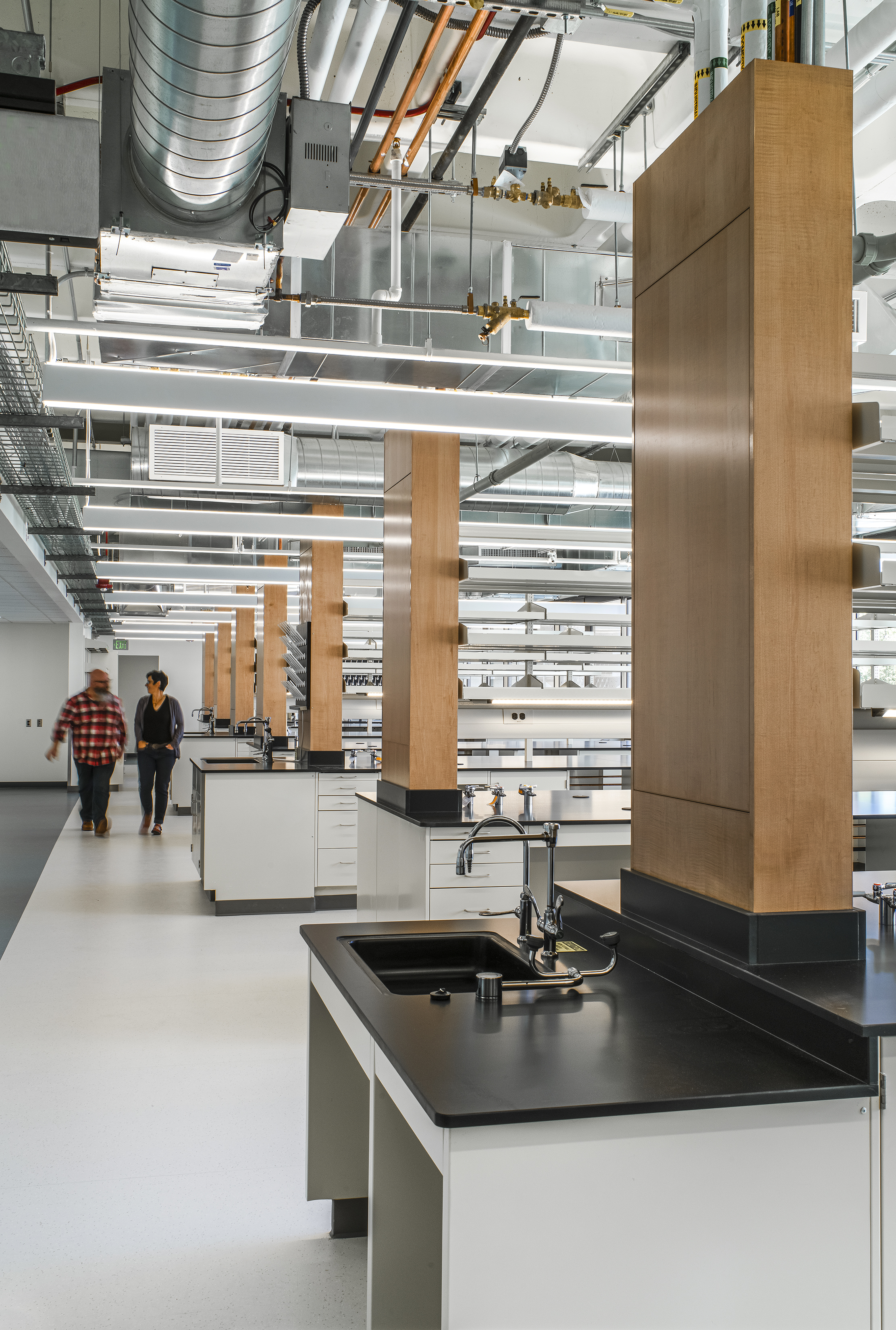 The Klamath Hall renovation project was completed in two phases, to allow the building to remain operational.
Pete Eckert ©2020

The project was not without its challenges. The building was designed on a 9-ft. construction module, says Cowan, and its waffle slab structure was resistant to changes in mechanical routing and modern lab planning standards. “While the building was designed as a laboratory facility, today, this is hardly the ideal starting point for laying out 10’-6” or 11’-0” aisles. To harmonize with the existing condition, we increased our lab planning module to 11’-3” so that every four lab modules aligned with every five building modules, standardizing the conditions and detailing between old and new construction. Wider aisles also added to the overall openness, visibility, and safety for the end users,” he states.

“When our contractor, Lease Crutcher Lewis, began work, we discovered that the concrete had experienced significant sag and creep over its lifetime,” Cowan adds. “Labs had floors with as much as a 2-3/4” difference between high and low points which made for a challenging casework installation. All of our work had to be accomplished while the building was occupied. The top floor was built in two phases of construction. And adjacent labs remained operational throughout. This required a high-level of communication and coordination between owner, architect, and contractor.”

The results, says Cowan, show that old buildings don’t automatically have to be knocked down and replaced entirely, and can instead be utilized for modern studies. “It is possible to take an out-of-date science facility, designed with obsolete standards, and create a first-class, 21st century research environment,” he says.