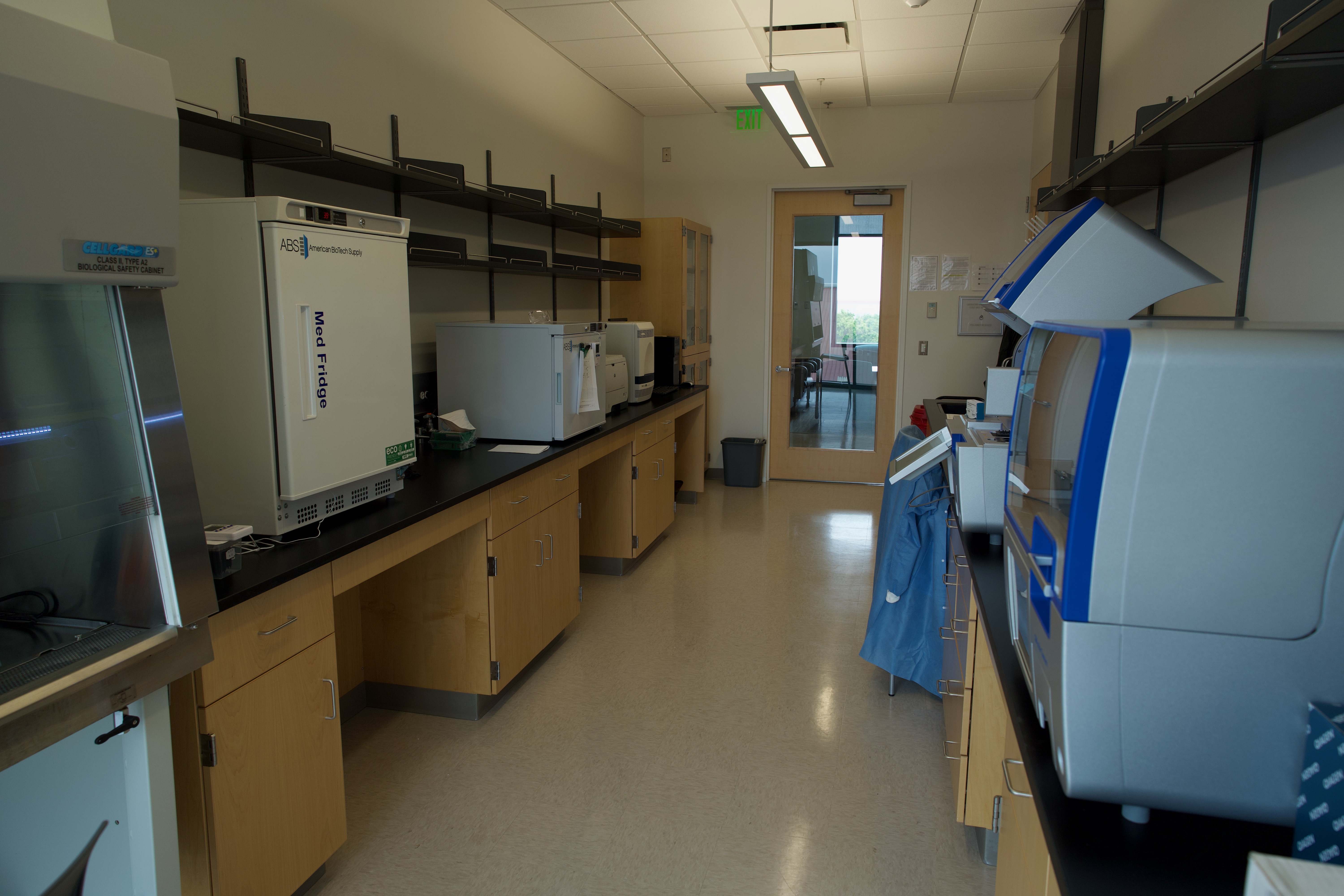 The County of Fresno moved into a temporary testing facility in order to test samples for COVID-19. An unused microbiology lab at Fresno State proved to be a suitable space.
Fresno State

The County of Fresno and California State University, Fresno (Fresno State) announced in April that they would partner to set up a temporary public health laboratory to bolster local capacity for COVID-19 testing analysis. The lab, situated in the Jordan Agricultural Research Center on the Fresno State campus, is equipped with ventilation, biosafety controls, and workspaces to keep lab technicians safe as they work to analyze swabs for potential COVID-19 infection. The lab is outfitted to conduct complex biological testing, and can handle between 40 to 60 test specimens every day using a polymerase chain reaction (PCR) method. The lab equipment was purchased by the County of Fresno, which also obtained a Clinical Laboratory License from the California Department of Public Health in early April. The on-campus laboratory will follow California state safety protocols by only receiving and housing collected specimens—swab tests are conducted offsite.

Joe Prado, community health division manager for the Fresno County Department of Public Health, says that finding the temporary lab’s location at Fresno State was a stroke of luck. The Jordan Agricultural Research Center had an available microbiology room, already outfitted with an HVAC system that met the requirements for a COVID-19 testing analysis lab. “We actually walked into a ready microbiology lab for Fresno State. It’s unheard of—when do you actually get that opportunity?” says Prado. Having a ready-to-go facility with a fully operational refrigerator, freezers, and biosafety cabinets allowed the team to move fast, Prado continues, which means that valuable time is not wasted during this pandemic.

Meetings with the lab management staff were necessary before getting started. The meetings included Prado, Fresno State’s lab manager, and the county’s lab director and senior microbiologist—but since everyone was in agreement about what needed to be done, things went quite smoothly. “We went over protocols, PPE, cleaning, management—we were all on the same page. We really had very little that we had to bring in for that to come up live. It was a very fortunate situation for us,” Prado says.

The County of Fresno's lab had fallen victim to two separate flooding incidents, which meant that a temporary facility was needed for COVID-19 testing in 2020. This image was taken during the 2016 flooding incident.
Fresno County Department of Public Health

This temporary lab is being used as the county rebuilds its own lab, which had fallen victim to two separate flooding incidents, say Prado. The first occurred over Memorial Day weekend in 2016, when a water pump failed and left about two feet of standing water in the lab. The clinical side of that lab had to be completely rebuilt, and the HVAC system was rehabbed to be more efficient. During that first rebuild, a BSL-3 room was developed in order to meet the CDC requirements of having redundancy, along with a double fan system that allowed for one to come on as a backup in case of a problem with the first. “That setup worked really well until the second flood,” says Prado, commenting on an October 2018 flood that occurred when a water line in the alley ruptured and blew a 5-ft. diameter hole through a concrete wall in the basement. A “river” of water came into the lab within about 45 minutes, Prado says, rendering the facility useless. “That completely annihilated our lab.”

One of the many positives about moving into the temporary facility at Fresno State, says Prado, was that their existing security protocols are very suitable for what’s needed for a COVID-19 testing analysis facility. He notes that the building already adheres to strict security regulations, including card swiping and a meticulous record of who comes and goes. “They pretty much have that already in place, so it’s just amazing to be able to step in and have them check all of our boxes,” he says. Moving into a lab that’s able to get up and running right away enables a fast turn around for test results, as Fresno County works to collect specimens and gets people to submit swabs.

COVID-19 Conspiracy Theories Could Be a “Gateway” to More Conspiracies

COVID-19 Conspiracy Theories Could Be a “Gateway” to More Conspiracies

COVID-19 Pandemic May Have Shifted the Personalities of Young Adults

COVID-19 Pandemic May Have Shifted the Personalities of Young Adults