Citrus crops across the globe are being decimated by a disease called Huanglongbing. HLB, as it is commonly known, results from bacteria (Candidatus Liberibacter asiaticus, or CLas) spread by a tiny insect (the citrus psyllid, which comes in both African and Asian forms). The phenomenon is difficult to research because CLas cannot be grown in a lab for study, and also because special facilities are required to contain the psyllid—if the insect was to escape the lab, the results could be disastrous.

HLB was first reported in the U.S. in August 2005, in Miami-Dade County in Florida. Since then the disease has ravaged a major percentage of Florida’s citrus crops. HLB clogs citrus trees’ phloem, which is a vascular tissue that transports sugar from the leaves. Trees affected by HLB display mottled leaves, lopsided and discolored fruit, and bitter juice from the fruit. There is no cure for this disease, and its spread means massive loss of fruit, trees, and money.

California is the largest citrus-growing region in the world that has not seen a mass spread of HLB. Also known as “citrus greening,” HLB was first reported in California in 2012, in a residential tree in Hacienda Heights. Another was found in 2015, and over 1,100 more were reported as recently as March 2019. Therefore, California’s citrus industry is racing to contain the disease, and perhaps even find an antidote, before California’s citrus crops suffer the same fate as crops in other citrus growing regions such as Florida, Brazil, and China. In order to conduct this research, a very secure agricultural research facility is required in order to grow trees bred or genetically engineered for resistance. The trees need to be exposed to the disease, and deliberately infected in order to test for potential cures.

The California Citrus Research Foundation partnered with citrus growers and packers to raise $8 million for a new citrus research lab in order to combat HLB, and in 2016 it joined forces with University of California, Riverside to construct a biosafety level 3 laboratory for research purposes. The ribbon-cutting ceremony for the lab building was held on Sept. 26, 2019. The UC Riverside citrus research facility is one of only two in the state of California, with the other at UC Davis. The project took about two years from conception to ribbon-cutting. 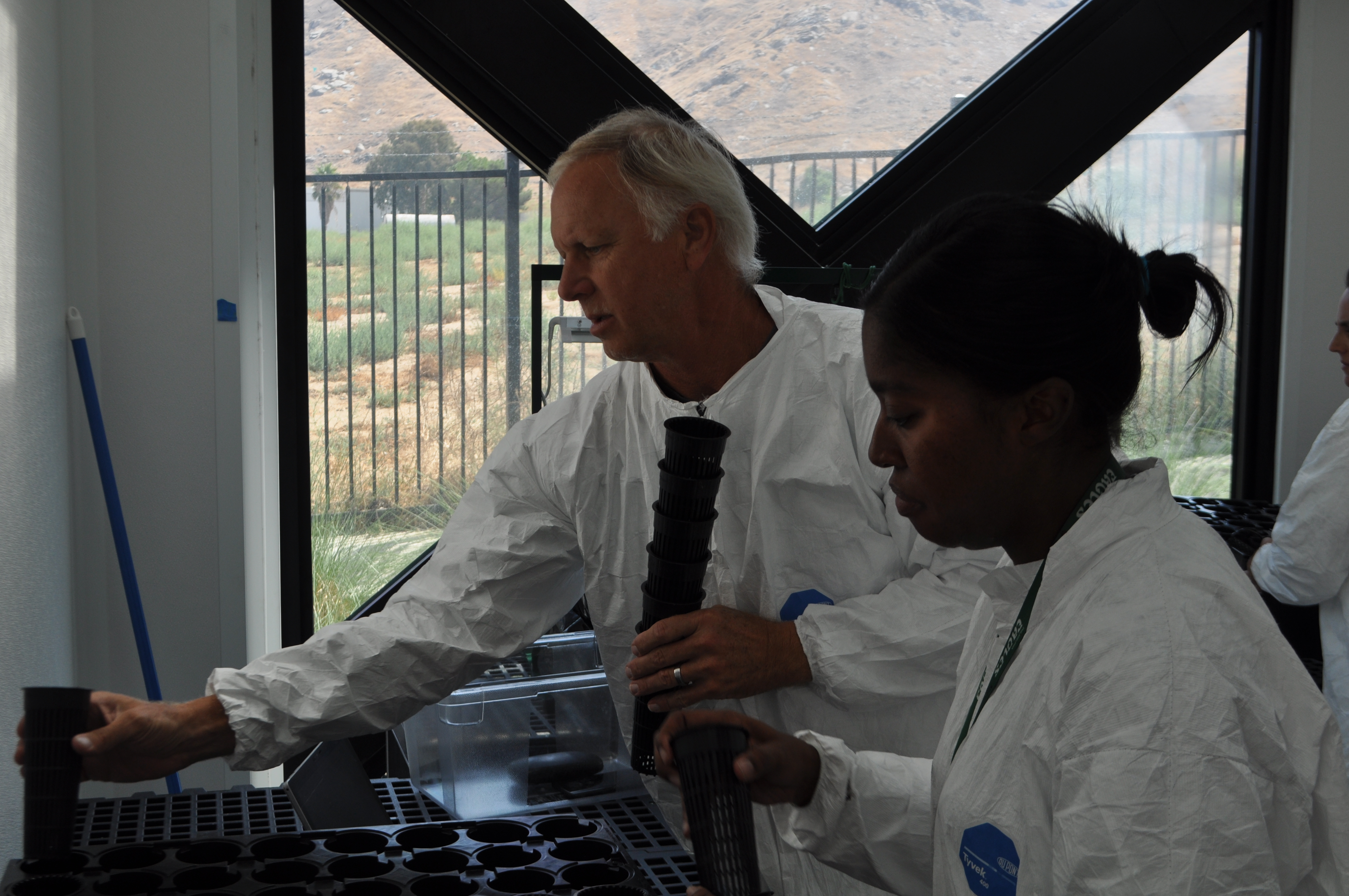 Le'Kneitah Smith, Citrus Containment Director at UC Riverside, describes how the California Citrus Foundation turned to UCR to provide researchers and resources after realizing that it could provide funding for a new research lab.

“At that point they just needed to reach out to a group that knew the research and knew what they needed,” she says.

Smith says that UC Riverside worked with Lab-Pro, a modular laboratory company in Ohio, to develop the citrus research lab. The citrus research lab was built as a modular facility in Ohio and then shipped in three separate cases to Riverside for completion. This was the most efficient way to get the lab completed, says Smith, because HLB is “such a threat, the industry needed this to happen as soon as possible.”

“Researchers would have meetings with the design team to see what they needed for the facility,” she says, describing how the researchers laid out the specific requirements needed to contain the dangerous psyllid.

“If HLB were to get out, it would destroy the agriculture industry,” Smith adds.

The UCR lab was mimicked off an existing BSL3 plant facility at UC Davis—the design team traveled to UC Davis to study aspects of that lab that would be useful in designing and building the Riverside facility. The UC Riverside facility is about 1,500 sq. ft., which is smaller than the UC Davis facility.

The UC Riverside lab faces several threats from nature. The foremost concern is how to contain the psyllids being studied at the lab—if even one were to escape, Smith says, the results could be catastrophic. The researchers ran precise tests on what kinds of chemicals, and what quantities, would be needed to kill the insect should it fall down a sink drain, for example. 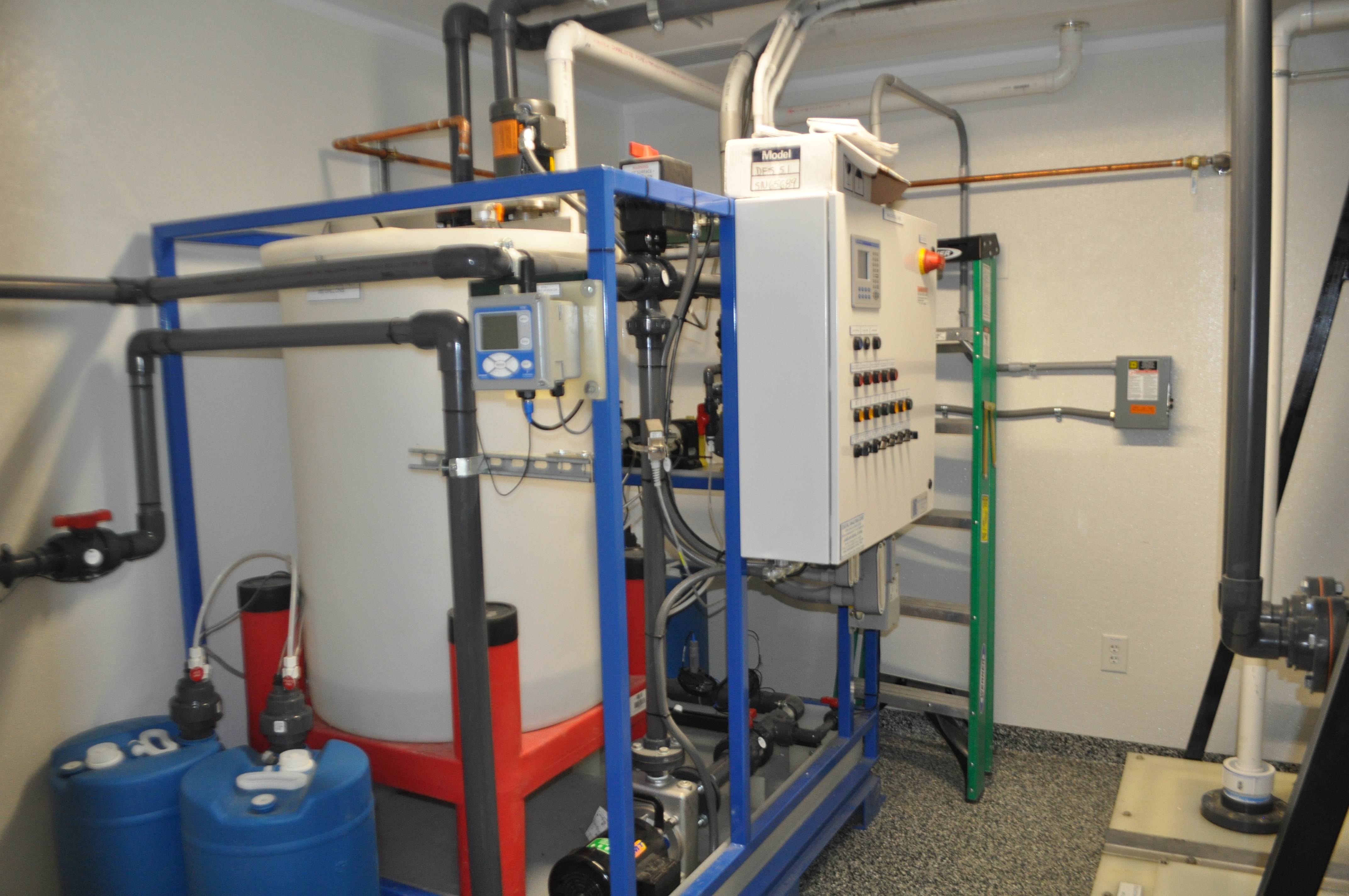 EDS (Effluent Decontamination System): The only way liquid can be removed from the facility. The pathogen is treated with Sodium Hypochlorite (Bleach) and released into the sewage once the pH is within range with an acid (Sulfuric Acid) and Base (Sodium Hydroxide). All liquid within containment goes through the system before it exits the facility.CREDIT: Le'Kneitah Smith

The California Department of Food and Agriculture (CDFA) has the lab “make sure there’s insect strain—certain mesh that we put on the registers,” says Smith. “There are precautions to make sure the insects can’t get out of the facility.”

“Say something were to happen—mesh is going to catch it, and there’s no way the bug is going to leave the room,” adds Smith, noting that a spray bottle of alcohol is kept handy to knock the insect down. The facility is also double HEPA filtered to make sure that nothing escapes.

“In biosafety level 3 you have certain things you have to set into place,” continues Smith, describing how there are standard operating procedures to follow as well as FDA regulations. The lab is both USDA and CDFA certified. “PIs have to sign that they understand and follow those rules.”

Because a cell phone can’t be brought into the facility, the staff uses a Vocera system, which hangs on the chest. The staff also need to wear self-dedicated scrubs, lab coats, and shoes, and there is an anteroom where they can don and doff their lab apparel. 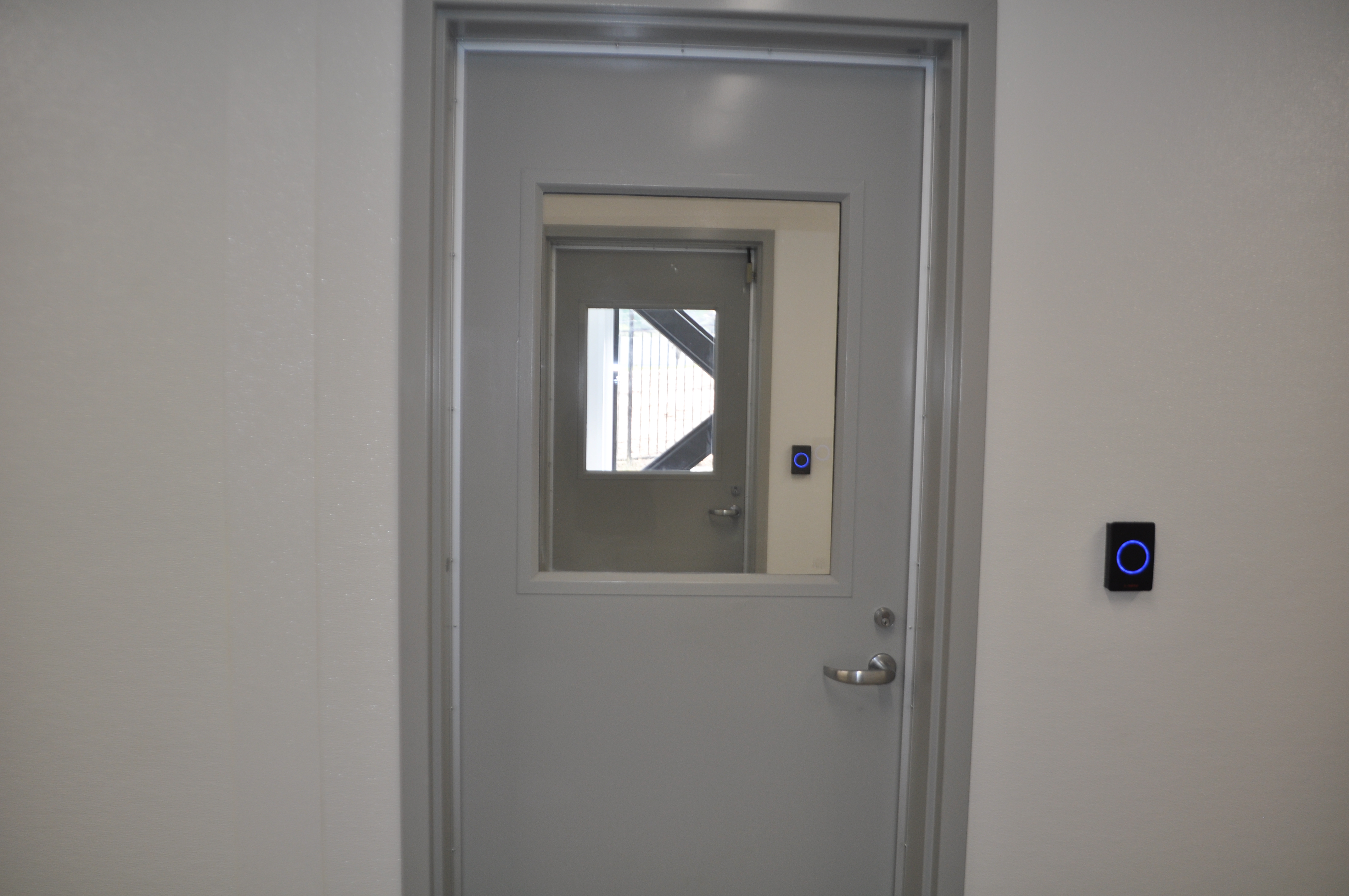 The anteroom door into the greenhouse requires badge access to move throughout the facility with interlocking doors. In order to open the door in front, the door behind has to be closed.CREDIT: Le'Kneitah Smith

Another concern, sadly all too common for many California residents, is fire. Smith says that a modular facility such as the UC Riverside citrus research lab can catch fire quickly, and that if a fire breaches the mountains behind the lab the staff probably has less than 10 minutes to evacuate. Therefore there is a fire safety plan in place and the staff run frequent drills to ensure that they know what to do should the situation arise.

Earthquake contingencies are also included in the lab’s safety plan. Smith notes that there is an alarm system in place that can be monitored remotely, citing an instance where she received an alert at 2 a.m. and was able to log into a system to view the lab on a camera. Backup generators are installed and can kick on within seconds should they be needed in an emergency situation.

The principal investigators working in the UC Riverside lab provided valuable input into the modifications that the lab would require. The team also realized that the HVAC system was unable to bring the heat load to a compatible level, so additional condensers had to be added. The condensors were added to suit the conviron growth chambers since the size was increased to hold more plants. 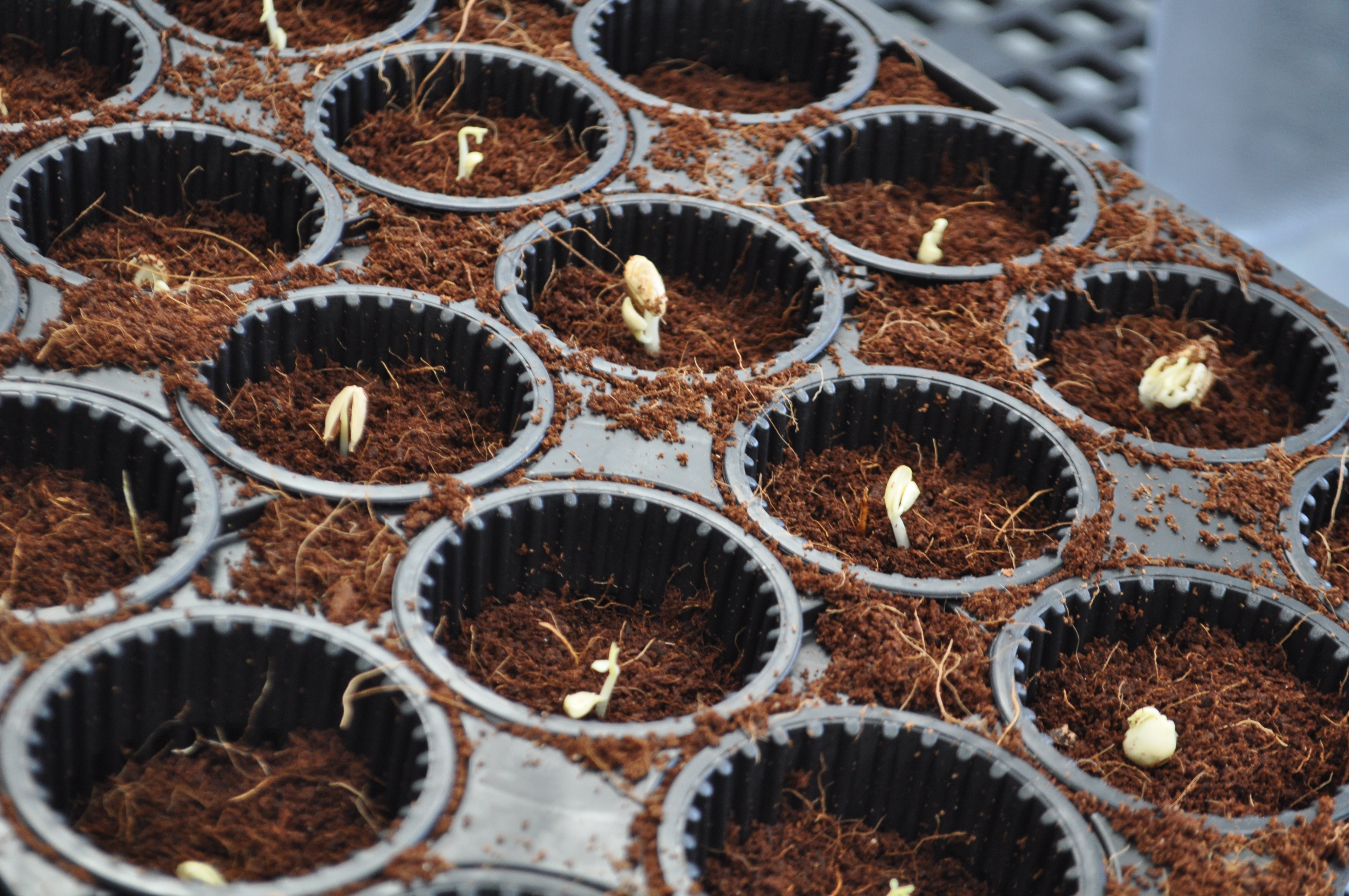 Coco and seeds growing happily in the greenhouse.CREDIT: Le'Kneitah Smith

A crucial aspect of opting to use a modular lab facility, says Smith, is gathering all necessary information from the researchers in advance.

“Make sure you have your people and your research and your needs ahead of time,” she says. “[The modular lab] was originally designed for a different group, and then different researchers came in and said, ‘We didn’t need this.’”

“As long as everyone who’s going to be in the final project is at the drawing board, you’ll be fine,” Smith adds, describing how it is important to talk to both the director of the facility and the researchers working with the pathogens to find out what they need, such as an ice machine or a minus 80 freezer, for example. Wall outlets need to be thought of ahead of time to ensure that all equipment can be accommodated. Because of examples like this, it’s important that all participants in the design and build of the lab facility are vocal about their needs.

“As long as you have the correct people in the room, you’ll be fine,” says Smith. “You’ll be golden.”