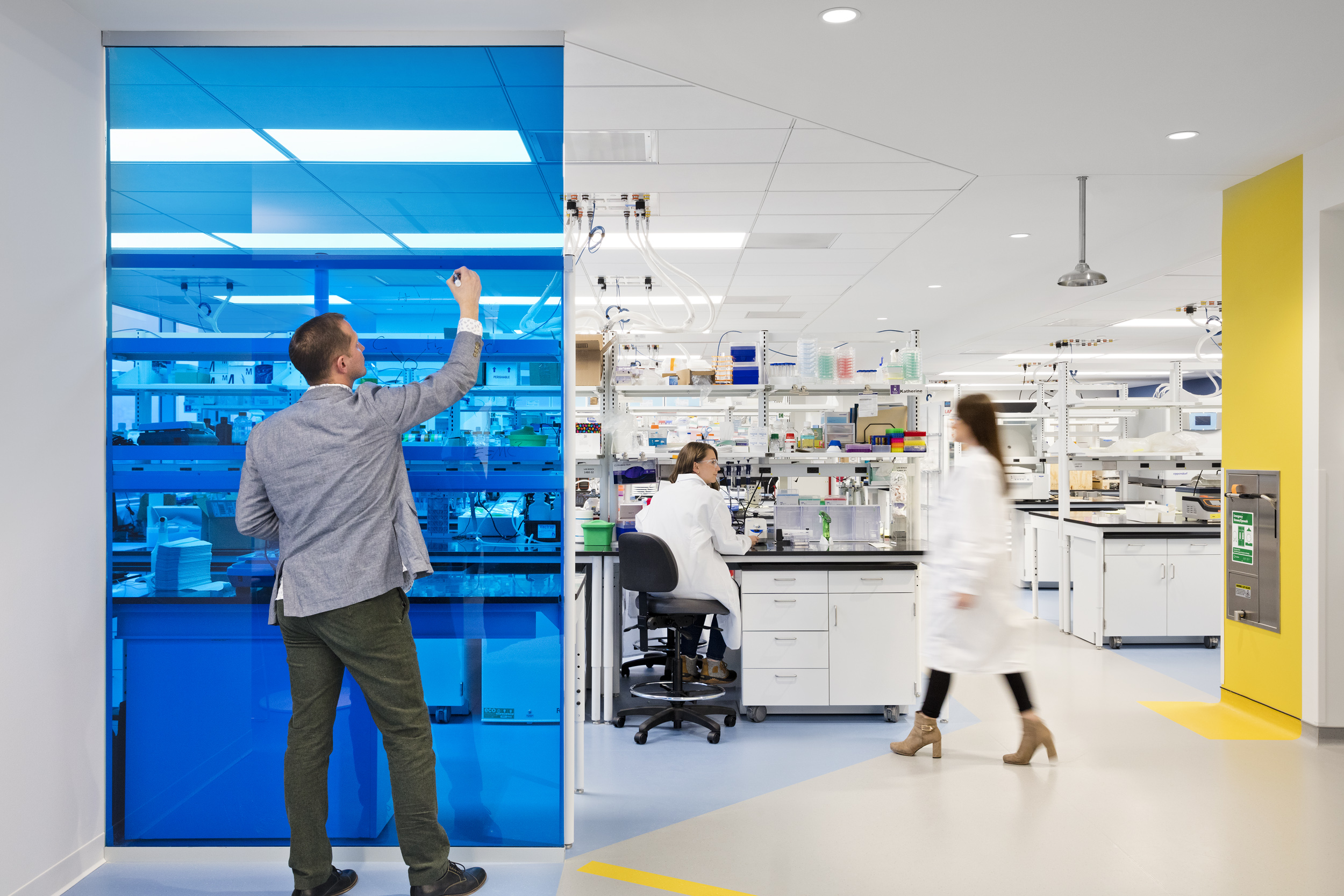 The design incorporates collaboration spaces in the transitions between labs and offices. These provide researchers a space close to the lab bench where they can connect with other researchers and colleagues to discuss findings or work through challenges.
Connie Zhou Photography

What do you think of when someone says the word “laboratory?” Bubbling chemicals, beakers and researchers in white lab coats toiling in walled-off spaces typically come to mind. Few of us conjure cheery, sunlit spaces with floor-to-ceiling windows, glass walls and greenery in the common areas. It just doesn’t occur to us that lab facilities could be more like futuristic think-tanks than the archetype of the cluttered and confined lab space often found in movies.

Unfortunately, the often claustrophic workspaces imagined by Hollywood directors weren’t too far off the mark. Scientists have long been faced with making new discoveries while working in uninspiring, windowless environments with little to no access to natural sunlight or productive collaboration space. Typically, scientists must also keep their work laptops in this same area, unable to bring work equipment into shared learning spaces, where they might communicate with colleagues. Such closed-in spaces do little for the creative exploration of science for the public good.

Times, and stereotypes, are changing. A groundbreaking exception to the old rules can be found in Amicus Therapeutics’ new Global Research and Gene Therapy Center of Excellence in uCity Square in Philadelphia. This revitalized part of the City of Brotherly Love is quickly also becoming known as the “Cradle of Cures,” and even “Cell-icon Valley,” for the groundbreaking work being done there.

In an area known for cutting edge science, Amicus was open to the idea of cutting-edge design, to enhance the work experience for its most valuable resource – its people. The CRB team, located just outside of Philadelphia, led the design of the Amicus facility to work with Amicus in creating a breathtaking new perspective of what a scientific facility can and should look like. 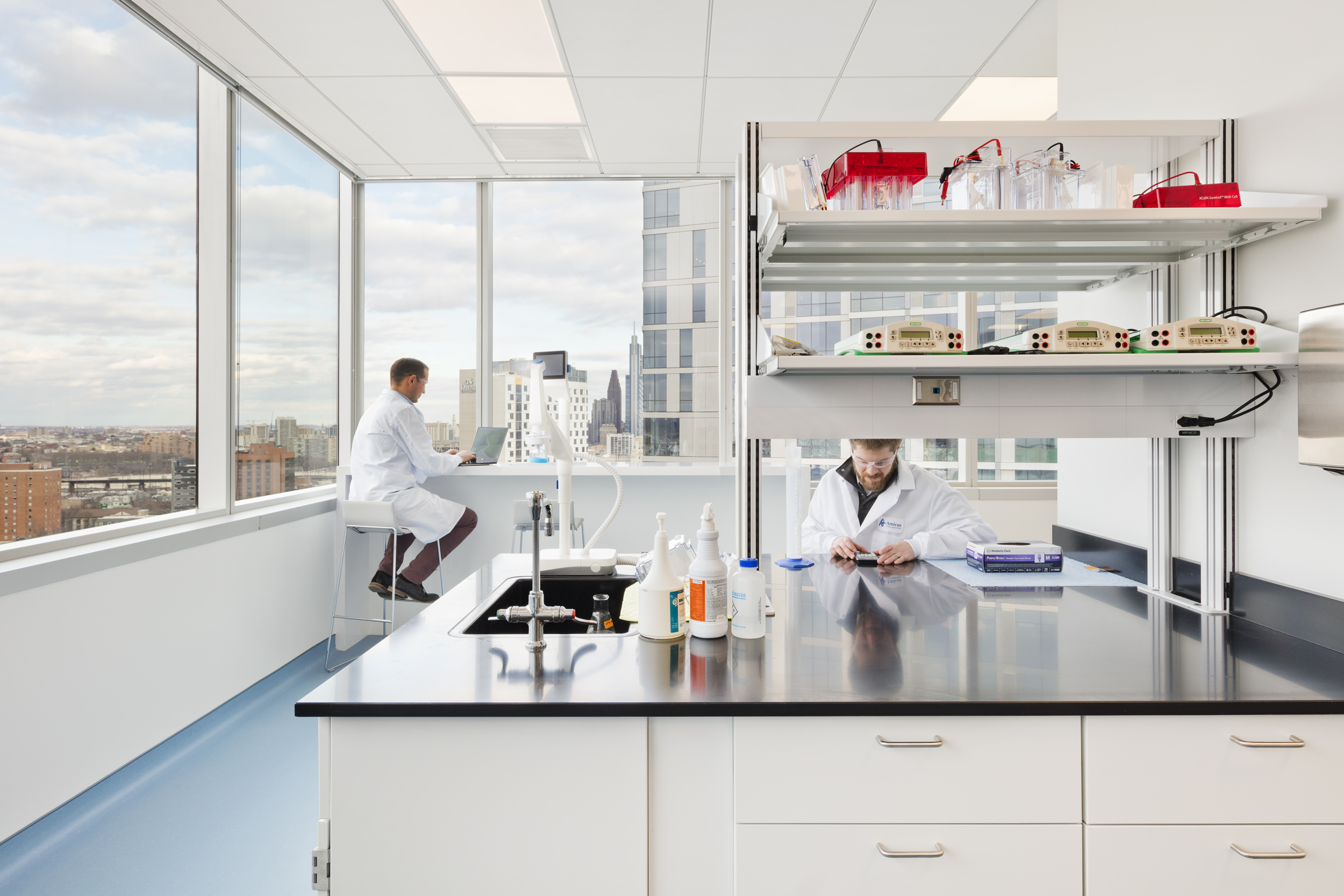 The facility has windows on all sides; capitalizing on this natural light and maintaining sight lines to the windows was essential. CRB kept benches and equipment, like fume hoods, away from the perimeter of the lab, for example, to maintain the bright, open environment.
Connie Zhou photography

At the new Amicus facility, scientists are charged with finding treatments and cures for rare genetic disorders. The company is led by John Crowley, one of America’s most well-known CEOs and the subject of the 2010 movie Extraordinary Measures. Crowley raised hundreds of millions of dollars to find a cure for the rare Pompe disease, a severe neuromuscular disorder endured by two of his children, Megan and Patrick. Crowley’s is a demanding job, as is the crucial work carried out by his teams—a critical factor in Amicus’ effort to rise above the traditional lab aesthetic to create a space that inspires their best work.

In most laboratories, the obstacle to accessing natural light and views of the outside world comes in the form of the large, monolithic pieces of lab equipment that often tower over scientists and can contribute to a dark and dim work environment. By contrast, the completed Amicus Therapeutics facility truly celebrates scientists and lab technicians by putting the laboratories in front of complete walls of windows with views of the famous Philadelphia skyline. The heart of the facility is a tremendous open, natural light-filled central staircase lined with patient photos and stories. Not only does the space serve as an ever-present reminder of the lab’s critical mission, it also creates an impromptu gathering place and a sought-after locale for corporate events.

CRB’s team of architects, engineers, and laboratory planners worked closely not only with Amicus’ corporate executives, but also with the company’s scientists, who must work in the facility every day. Together, they strategically identified equipment that could be placed closer to the interior of lab, based on lab casework. This leads to unique space configurations that create work-flow efficiencies and ensure unobstructed views of both the inside and outside—minimizing that walled-off feeling often found in the presence of large laboratory equipment.

Understanding the importance of collaboration 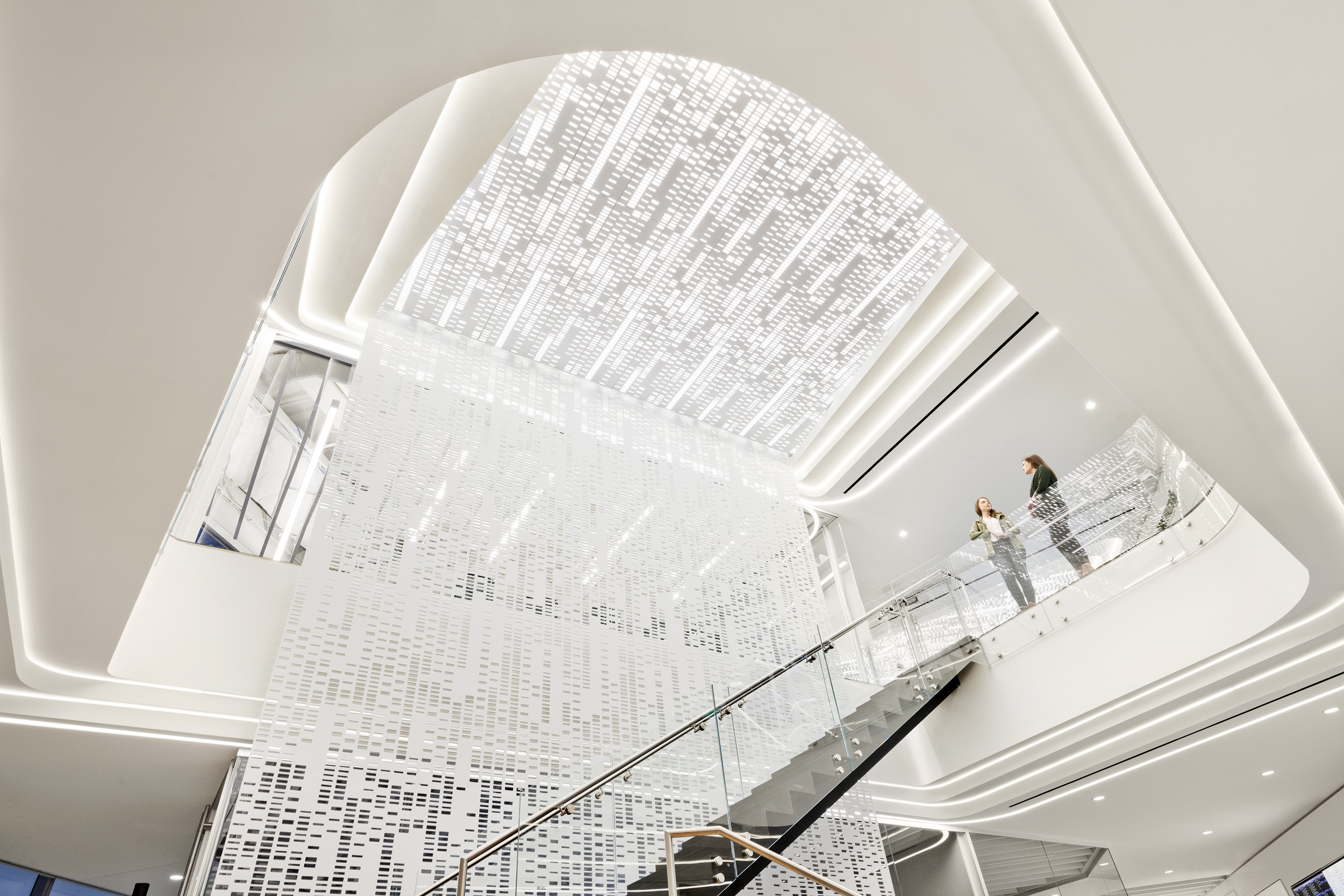 The focal point of this space is a stairwell that serves as a community hub for employees. A back-lit veil with a pattern of Pompe disease's gene sequence extends from the ceiling and creates a filter between spaces.
Connie Zhou photography

With more emphasis than ever being placed on the rapid, effective treatment and cure of rare diseases, collaboration among scientists has become critically important. Often, however, facilities that house laboratory space have a hardline segregation between office and laboratory environments. As a result, when scientists want to collaborate or discuss a particular experiment with their colleagues, they have to leave the laboratory or have conversations at the lab bench. These areas may not provide scientists with the opportunity to use the latest technology to fullest extent, or to allow for more free flow of information among colleagues.

The Amicus/CRB design philosophy returns human interaction to the equation, giving scientists the freedom to move through easily identifiable zones throughout the office/lab space. These spaces include quiet, huddle, informal and social zones safely away from active lab operations but still within the lab environment. Huddle zones, for example, are easily accessible and provide a “touch-down” space with white boards, tables, chairs and large monitors where scientists can plug in their laptops and collaborate. Finally, scientists have a space of their own, where they can discuss their ideas and research while respecting the sterility of the laboratory areas where attention to quality and cleanliness are non-negotiable.

It may seem strange that it has taken so long for laboratory work environments to catch up to the open, light-filled standards that corporate executives have practically taken for granted. But if the successful design of Amicus Therapeutics is any indication, it won’t be long before scientists everywhere will be able to shed the close confines of traditional laboratories—and step into the light.

Matt Decker is an architect at CRB USA, an AEC firm headquartered in Kansas City, MO.

A New Way to Program Light on an Ultra-Small Scale

A New Way to Program Light on an Ultra-Small Scale