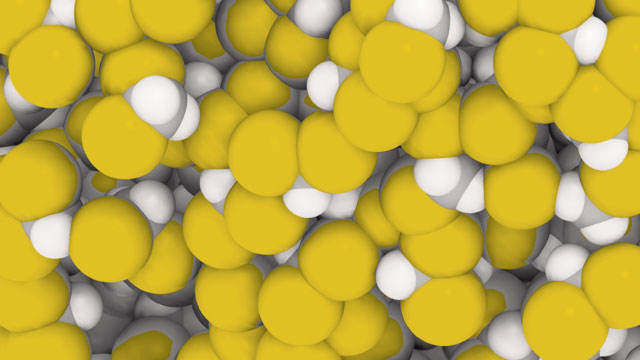 If you have ever refinished an old, treasured piece of furniture or tried to remove paint from an item being restored, you have most likely reached for Strypeeze®, the orange stuff, or a similar paint/varnish stripper at your local hardware store. That is methylene chloride, also known as dichloromethane, a potentially dangerous solvent responsible for at least 13 fatalities since 2000.

In the February 24, 2012, Morbidity and Mortality Weekly Report (MMWR), the Centers for Disease Control and Prevention published a brief report on methylene chloride fatalities among bathtub refinishers.1 The CDC report states that OSHA identified 10 deaths related to methylene chloride stripping agents, and another three were investigated by the Michigan FACE (Fatality Assessment and Control Evaluation) program from 2000 to 2011. Granted, these fatalities are extreme cases involving bathtub refinishers and aircraft-grade stripping agents, scenarios not likely to occur in our laboratories. But when you consider that the average amount used in each case was only six fluid ounces (177ml) and that exposures as short as one hour were all it took, they do demonstrate vividly the potential dangers of working with methylene chloride.

In fact, methylene chloride and its associated hazards are serious enough for OSHA to produce a specific standard covering its use in the workplace— 29CFR1910.1052.2 The standard sets action levels, permissible exposure limits, and requirements for compliance—all the usual things that we will distill for you shortly. First let’s get to know a little more about the chemical we are using.

In laboratories, the most common use for methylene chloride is as a solvent, especially as an extraction liquid for gas chromatography. Other uses include metal cleaning and degreasing, serving as a process catalyst, pharmaceutical and adhesive manufacturing, polyurethane foam and polycarbonate resin production, and chemical stripping, among many others. It is a colorless liquid with a moderately sweet aroma, similar to chloroform. Methylene chloride is highly volatile, with a low boiling point (104°F) and vapor pressure (350mm Hg). When those are combined with its heavier-than-air molecular weight (85), methylene chloride is a serious inhalation hazard.

The primary exposure route for methylene chloride is inhalation, although absorption through the skin is also a concern. Acute inhalation produces central nervous system depression, and at very high concentrations can lead to narcosis, eventually causing respiratory failure and death. Since methylene chloride is metabolized to formaldehyde and carbon monoxide, chronic exposure can produce CO-type symptoms of headache, nausea, vomiting, confusion, and dizziness. Skin contact can result in irritation and chemical burns. In addition, OSHA considers methylene chloride a potential occupational carcinogen.

The OSHA standard covers all occupational exposure to methylene chloride in general industry in all workplaces (separate standards cover shipyards and construction sites). If this solvent or chemical is used in your workplace, an exposure assessment and a hazard evaluation are required for those employees handling the material. The OSHA action level (AL) is 12.5ppm (parts per million methylene chloride in air), and if this is reached or exceeded, it triggers compliance activities such as monitoring and medical surveillance. The permissible exposure limit (PEL) is 25ppm, at which point employers must use engineering and work practice controls to limit employee exposures. Both the AL and the PEL are based on eight-hour time-weighted averages (TWA) or, in other words, an average exposure for a full work shift. Respiratory protection is an alternative as an interim measure while controls are being put in place or if engineering controls are insufficient or unavailable.

There is also a short-term exposure limit (STEL) of 125ppm based on a 15-minute TWA. This level should never be exceeded. To complete the standard, the limit for exposure immediately dangerous to life and health (IDLH) is 2,300ppm.

Assessments are conducted by measuring the air concentrations near the worker’s breathing zone for a representative number of employees for each process or task where the chemical is used. An initial assessment and monitoring are required unless the employer has objective data that demonstrate the highest potential exposure (worst case scenario) does not exceed the AL and STEL or exposures are for fewer than 30 days per year.

Once the initial assessments are completed, the data are evaluated. If the AL and/or STEL are exceeded, then periodic monitoring is required, following Table 1 below.

Regulated areas are established and clearly marked for all spaces where the PEL and STEL levels are exceeded. This includes any area where the limits are expected to go above the PEL or STEL. Minimize the number of employees authorized to enter these areas.

Hazard communication must inform all affected employees of the dangers of working with methylene chloride, including the health effects, symptoms of exposure, and safety requirements.

Finally, employers must implement a medical surveillance program and include every employee covered by the OSHA standard. The medical surveillance is provided at no cost to the employee and includes an initial physical exam and medical history, periodic exams based on the employee’s age, emergency exams following any incident, and exams at reassignment or the end of employment.