Evolution of the pH Meter

Tracing the origins of the pH meter and looking ahead to future advances.

The pH meter is an essential piece of equipment in most laboratories, vital for many analytical and synthetic processes. Typical pH meters consist of a glass electrode connected to an electronic meter. The electrode produces a small voltage, which is converted to and displayed in pH units by the meter.

Max Cremer discovered that an electrical potential develops when two liquids of different pH levels come into contact at opposite sides of a thin glass membrane.

Fritz Haber and Zygmunt Klemensiewicz used the principle described by Cremer in 1906 to create the first glass electrode that measured hydrogen activity. However, technical difficulties, including the large internal resistance of glass electrodes, prevented the large-scale potentiometric measurements of pH. Because of these difficulties, use of a very sensitive, but expensive, galvanoscope was necessary to obtain reliable results. Today, glass electrodes are the most commonly used measuring electrodes.

Arnold Beckman proposed that the current obtained through Haber and Klemensiewicz’s electrode be amplified, allowing it to be measured using a cheap miliamperometer. He devised a simple, high-gain amplifier using two vacuum tubes for this purpose. This advance represents the development of the first pH meter, known at the time as an “acid-o-meter”.

The first commercial pH meters were introduced in the U.S. by Dr. Arnold Orville Beckman, the founder of the Beckman Instruments Company (now Beckman Coulter). The Beckman model was known as the Model G acidimeter and later renamed the Model G pH meter. This device was revolutionary because it was the first to combine the whole apparatus (amplifier, electrochemical cell, electrode, calibration dials, batteries and measuring gauge) into one unit. During its first year, Model G sales reached 444 units. The model continued to be sold until the mid-1950s, with an estimated 126,000 sold during its lifetime.

The Danish company, Radiometer, introduced its first commercially available pH meter, model PHM1. This model was an improvement on the original Beckman design, which had been found to give pH measurements that were somewhat dependent on the depth of electrode immersion.

Dr. Arthur Kuntze founded the family business, Dr. A. Kuntze, specializing in analytical instrumentation and pH meters in particular. This company is still owned by the family in its third generation.

The first laboratory combination electrode was introduced by Cannon. Improvements in sensor technology led to refinements in glass formulations that reduced alkalinity error and improved selectivity.

The first handheld pH meter was launched by NEOTEK PONSEL.

The first pH preamplifier was developed and patented by P. Carderio.

The first portable digital pH meter was designed and manufactured by Jenco Electronics in Taiwan. This meter was sold under the Cole-Parmer brand.

The porous Teflon reference junction was patented by Gary Bukamier. This replaced the earlier commonly used ceramic and wood junctions, and remains the junction of choice today.

Hanna Instruments became the first company to introduce a pH electrode with a built-in temperature sensor (HI1217S). This was sold worldwide, and became ubiquitous throughout the market.

The first waterproof portable pH meters for use in harsh environments (HI9025) were launched by Hanna Instruments.

WTW became the first manufacturer of pH meters to be certified to ISO 9001.

Denver Instruments released the Advanced AP series of portable meters. These were the first to offer a waterproof IP67 rating with “no glass” Field-Effects Transistor (FET) electrode capabilities.

WTW introduced several new instruments within their inoLab line that featured three function levels. These instruments set new standards for the analytical measurement of pH, oxygen, conductivity and temperature as well as for ion-selective electrodes (ISE) and multi-parameter measurements.

Hanna Instruments became the first company to offer simultaneous testing for pH and EC in a single instrument. In this year, the company also released the world’s first multi-parameter (pH/conductivity/temperature) pocket tester.

Mettler Toledo introduced the only fully modular pH meter on the market: the SevenMulti. This pH meter offered impressive flexibility, allowing the customer to choose any combination of modules to create a tailored multichannel instrument. The instrument also allowed the customer to buy and add extra extension units at a later date, providing greater flexibility.

The original Beckman pH meter (released in 1936) was designated an ACS National Historical Chemical Landmark in recognition of its significance as the first commercially successful electronic pH meter.

The Docu-pH from Sartorius Mechatronics featured DocuClip® for sensor identification. DocuClip® technology was the first to provide complete documentation to ISO/ GLP/GMP and 21 CFR Part 11 FDA standards on electronic records.

Metrohm launched the 867 pH Module, equipped with both conventional and intelligent measurement inputs for pH, potential, ion and temperature measurements. An integrated electrode test was able to quickly check the electrode and deliver troubleshooting information.

Hach Lange launched the pH ultra, which offered rapid measurement for all sample types, even difficult samples such as low-ionic strength (pure) water.

The Future For pH Meters

Like many laboratory instruments, pH meters have evolved beyond all recognition over the last several decades. However, experts predict a gradual evolution rather than a revolution in the design of pH meters during the coming years. It seems likely that the product hardware will continue its trend towards miniaturization, while software will undoubtedly become easier to develop and use. Although its form and function may change little in the immediate future, it seems certain that the pH meter will continue to enjoy its status as one of the most ubiquitous pieces of laboratory equipment.

Despite the growing recognition of the importance of the pH directly surrounding a cell as an indicator of cell health, techn...

These new meters are available in two versions—the ST400, specifically designed for pH analysis and the ST400M—a ... 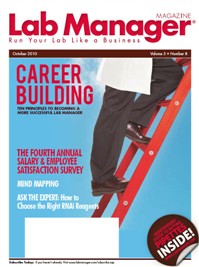