Taking the Analyzer to the Sample

Field instruments have been around for decades, but advances in computing and electronics miniaturization have spawned a new generation of instruments that are more approachable, smaller, and lower in cost.

When Forston Laboratories (Fort Collins, CO) introduced the LabNavigator multi-technology meter in 2010, few devices could boast “multi-parameter” capabilities— essentially multiple, distinct detection modalities in one instrument. The handheld LabNavigator plugs into analysis modules for turbidity, colorimetry, oxygen, pH, gas chromatography, and others. Users acquire the sensors they need and attach them to create a “lab on the fly.”

Looking into his crystal ball, Zelenak sees instrumentation following ideas from consumer industries to improve “the user experience far beyond just hardware and interface issues.” He mentions computing cloud, data aggregation, and connectivity technologies as enablers of a new paradigm for seamlessly collecting and processing data from the field.

The keys to the design are interchangeable chip-sized components. The 3500 MiD integrates with analytical or preparative LC, flash, or supercritical fluid LC and provides in-line analysis with no additional footprint or infrastructure requirements at 10 percent of the operating cost of a conventional MS.

Company founder Eric Yeatman, Ph.D., notes the significant miniaturization limits of quadrupole MS. A quadrupole consists of four parallel, precisely positioned, conducting electrodes that form a “tunnel” inside the instrument. Charged particles travel along the length of the rods into the detector. Conventional quads are a foot long; Microsaic’s was fabricated in a silicon foundry and is about the size of a matchbook. The vacuum system and pumps can be much smaller than those of a conventional quadrupole MS, but they are still approximately the size of a desktop PC.

The Microsaic 3500 MiD compact mass spectrometer with electrospray ionization source is based on a quadrupole filter fabricated using silicon micro-engineering. This allows the vacuum system to be reduced in size sufficiently that it, including all pumps, can fit in the desktop unit shown.

Microsaic is not marketing the MiD as field-capable, instead focusing on biotech and pharmaceutical applications that demand versatility and easy setup. “We have no illusions that we’ll be driving large analytical mass spectrometers from market.” But the MiD is field-transportable due to its low power requirements. “It is conceivable that a battery powered version could be made,” Yeatman adds.

“Due to its low thermal mass GC and unique toroidal ion trap mass spectrometer, it is ready to operate from a cold start in five minutes. A typical analysis takes three minutes or less,” commented Kenneth J. Fredeen, Ph.D, senior product manager at Smiths Detection. “We designed the operating software so that nonexperts can run the system with minimal training.”

The main focus in creating a person-portable GC/MS is minimizing power requirements. The more power required, the larger and heavier the power supplies and the less likely the device will run on batteries. “We focused on the power required for the GC, the MS, and the vacuum system,” Fredeen explains. For the GC, Smiths employed a low thermal mass design where the heating element is intertwined with the capillary GC column. For the MS they selected an ion trap design rather than the more popular quadrupole that operates at lower vacuum levels—hence requiring smaller pumps.

The GUARDION GC/MS from Smiths Detection ships to where the samples are and is up and running in minutes.

When used in stand-alone mode with the “lite” version of its operating software, it displays spectra as well as concentration readouts for up to 25 gases. When connected to a laptop running the full software package, it operates as a full-fledged sophisticated spectrometer with access to a large spectral library and 50-gas capability. Mixtures and interfering gases are easily deconvoluted.

Miniaturizing FTIR usually involves balancing portability and capabilities. “But a trace gas analyzer should not be miniaturized at the expense of analytical performance,” says Antti Heikkilä, export manager at Gasmet Technologies. FTIR’s spectral resolution depends on the path traveled by moving mirrors in the interferometer. The lowest practical resolution for gas analysis is between 4 and 16 cm-1; Gasmet uses 8 cm-1.

Another consideration is the weak absorption signal of trace gases, requiring a large beam diameter within the interferometer to provide adequate light intensity. “Mirrors need to be a certain size to provide good sensitivity,” Heikkilä explains. And room must be made for an internal calibrating laser. Finally, subppm measurements call for an optical path length of at least five meters. Gasmet uses 9.8 meters but “folds” the path length in a multipass cell, which nevertheless adds up to one liter of volume to the device.

ASD’s (Boulder, CO) introduction of its TerraSpec 4 line of portable mineral analyzers in January exploits the power of near-infrared (NIR) for mineral exploration field work. The company’s LabSpec 4 uses full spectrum NIR reflectance, from 350-2500 nM (most portables focus on a slice of the spectrum). Bundled with each instrument, ASD’s Indico® Pro software collects spectra through reflectance, transmittance, or absorbance. It operates on battery, line, or vehicle power and has wireless capability for measurements away from the controlling laptop.

“We take field portability seriously,” comments Dan Shiley, application chemist at ASD. “These full-featured instruments perform equally well as or better than laboratory instruments and provide data that is just as good.”

Agilent Technologies (Danbury, CT), which acquired FTIR specialty company A2 Technologies in 2011, has been continuing innovation in handheld FTIR, transportable GC/MS, and the transportable 1220 Infinity Mobile LC. The company’s portable FTIR handhelds provide accuracy and precision comparable to Agilent’s laboratory equipment. Because they use non-hygroscopic ZnSe optics, water vapor and atmospheric conditions have no effect on the instruments.

According to John Seelenbiner, Ph.D., mobile FTIR marketing manager, the next few years will see “significant developments” in portable FTIR. Advances in software and algorithms will improve response and measurement times to make the systems easier to use. “The real growth for mobile instrumentation, though, lies in systems dedicated to providing actionable results. Dedicated systems will require method and applications development to make technology accessible to nontechnical users,” which will create even larger markets, Seelenbiner says.

X-ray fluorescence exhibits many characteristics of a detector-worthy analysis method, including the ability to operate in non-destructive mode. In February XOS (Orlando, FL) introduced HD Mobile™, the latest in a line of high-definition X-ray fluorescence (HDXRF) analyzers. For practical reasons XRF is most often used with metals lower in the periodic chart than sodium. This makes the technique ideal for quantifying samples containing heavy or toxic metals.

HDXRF provides heavy metal analysis in consumer products with precision similar to that of wet chemistry but non-destructively and with quicker turnaround times and lower costs.

According to XOS product manager Satbir Nayar, XRF analysis is all about “counts”—the number of fluorescence events picked up by the detector. Counts are a function of the intensity of the exciting radiation and the concentration of the target (e.g., lead in paint). XOS uses a miniaturized monochromator system that focuses the intense X-ray beam on an area 1 mm in diameter. “This allows measuring very small features of products such as circuit boards.”

The design of the optics also allows examining specific layers within a product—for example, a spray-painted coating—and distinguishing it from the substrate. Vertical spatial discrimination is critical for inspecting toys, for which allowable concentrations of heavy

Like other portable tools mentioned in this article, HD Mobile does not replace benchtop XRF spectrometers but rather serves as a screen—a starting point for further investigation. An untrained user can examine a product shipment or every nth part in about 30 seconds (full-sized instruments are faster) and obtain a yes or no answer. “They can even examine the spectrum on a small screen on the device, but the majority of users are simply screening,” Nayar explains.

The need for at-line and in-line bioprocess protein monitors is critical. Current instrumentation quantifies properties such as pH, turbidity, and gases but not protein titer and quality. Mediomics (St. Louis, MO) has created a proof-in-principle handheld fluorescence reader that provides deep insight into the ultimate target of process analytics—the product itself.

The device utilizes Mediomics’ Pincer® “sandwich” assay, similar to ELISA, where two modified antibodies to the protein of interest bind to different regions of the target and then to each other to emit fluorescence. Assays are available for titer as well as for extent of glycosylation, a measure of quality. When fully developed, the handheld analyzer will incorporate reagent and sample wells, an LED light source, and a fluorescence detector similar to those found in microplate readers. “The analyzer could even be finger-sized,” says company president Yie-Hwa Chang, Ph.D.

Mediomics’ proprietary assays, which will work with the new analyzer, have already been adapted for rapid detection of such molecules as cAMP, tryptophan, S-adenosyl methionine, PDE assay, biotin, insulin, Cpeptide, albumin, C-reactive protein, and pathogens.

It becomes apparent that much innovation in instrumentation will occur at the lower-size end, where—protestations to the contrary notwithstanding—functionality and versatility are sacrificed for speed, immediacy, and portability. Moreover, instruments that provide a yes or no answer in the field do not demand a high level of skill from operators, a trend we see over and over in fully featured instruments. Forston’s corporate tagline, “We're the chemist so you don't have to be,” nicely encapsulates the philosophy behind this idea. 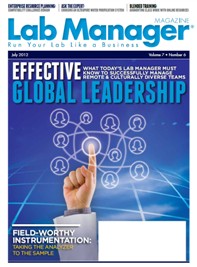 What today's manager must know to successfully manage remote and culturally diverse teams.