In addition to the products introduced at Pittcon 2014 we’ve already profiled in our Technology News section, there were plenty of other exciting developments to share from the press conferences we attended in Chicago in March.

One standout from the show was the number of partnerships announced between manufacturers as well as longer- standing collaborations that have generated some new technologies.

For example, Beckman Coulter Life Sciences announced Mar. 4 that it will be partnering with Wyatt Technology. The collaboration combines Wyatt’s expertise in protein characterization, light scattering and biophysics with Beckman’s knowhow in particle counting, particle characterization, and cell viability measurement and will help both companies expand in the particle market. Beckman will also be manufacturing AB SCIEX’s CESI 8000 system for biologics characterization, a technology that resulted from AB SCIEX combining the CE business of Beckman Coulter with Eksigent nano and microscale chromatography to form a separations business called SCIEX Separations. The CESI 8000 system took bronze in this year’s Pittcon Editors’ Choice awards for most innovative product at Pittcon.

Another award-winning technology also involved a collaboration. Texas Instruments’ (TI) DLP NIRscan™ evaluation module for spectroscopy, which is built by Keynote Photonics, won gold in the 2014 Editors’ Choice awards. The company also announced the first DLP® device optimized for use with near infrared light on Mar. 3. With these technologies, TI hopes to enable spectrometers for use in the food, pharmaceutical, oil and gas, and emerging industries to deliver labquality performance in the field and manufacturing environments.

“We continue to push the limits of what DLP technology is capable of, opening it up for use in advanced scientific, industrial and medical solutions,” said Mariquita Gordon, DLP Embedded manager at TI.

Two other manufacturers that will be teaming up are Metrohm USA and Waters, Inc. Waters will now develop and release Empower® chromatography data system (CDS) drivers for Metrohm’s new 900 series ion chromatographs and its older 800 series modules.

“We are excited to be able to provide Waters Empower customers with access to Metrohm’s innovative IC technology,” said Edward Colihan, president of Metrohm USA. “The ability to have instrument control and data processing within a single CDS is of paramount importance to the pharmaceutical customer.”

Specific modules of Metrohm’s new Flex and Vario ion chromatographs are set to be released later in 2014.

Olympus SLIDEVIEW™ VS200 slide scanner and Ultivue UltiMapper™ reagents meet the changing needs of the scientific...

University of Alberta and Atlas Biotechnologies to explore use of medical cannabis for treating MS, Alzheimer’s, and Hu... 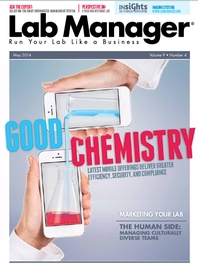 Analysis, elbow grease, and legwork can bring in new business at little or no cost
Managing culturally diverse teams