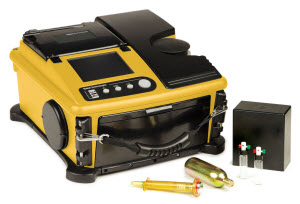 When it acquired Torion Technologies back in April 2015, PerkinElmer added a portable GC-MS to its analytical offerings for the first time—the TRIDION-9 system. Already an innovative technology, PerkinElmer hasn’t made any changes to the GC-MS, apart from renaming it the Torion T-9.

The system is still fast, reliable, and easy to use out in the field, whether it’s used for the rapid screening of chemicals—including environmental volatiles and semivolatiles, explosives, chemical warfare agents, and hazardous substances—or for food safety and industrial applications.

The system is ready to analyze samples in under fi ve minutes from a “cold start,” allowing users to analyze around 12 samples an hour, on average. And, though it’s compact enough to carry around test sites, the GC, according to PerkinElmer, “provides equivalent chromatographic resolution and performance to a benchtop system.”

Also, as you’d expect from an instrument meant to be used in harsh environments, the Torion T-9 is designed to take a beating. The GC-MS can also run on battery power for up to two and a half hours and features an on-board disposable helium carrier gas cartridge capable of up to 150 sample runs. And with its simple navigation buttons and color touchscreen interface, operators of all skill levels can feel comfortable using the T-9.