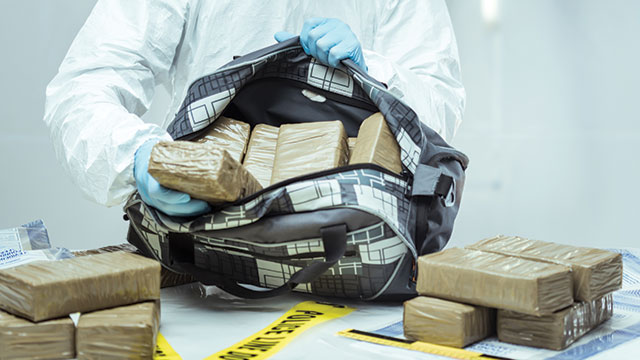 A nalytical scientists of a certain age will react with puzzlement to the term “handheld Raman spectrometer.” Yet thanks to small, innovative developers, Raman’s mysteriousness has become a strength which, combined with advances in electronics, optics, and computing, is uniquely suited to handheld formats.

The handheld Raman marketplace is crowded. Some spectroscopy specialists, like Ocean Optics (Largo, FL), have waited on the sidelines for the right opportunity, which has apparently arrived. Ocean Optics is planning to introduce a handheld Raman instrument to detect unknown chemicals in powders, liquids, and gels. “The device will be simple enough for novice users to operate, yet sophisticated enough for threat assessment of dangerous drugs, chemicals, and explosives,” says Rob Morris, marketing director.

Morris explains the lure of Raman: “Though Raman spectra are very low in intensity, they probe molecular structure as effectively as infrared but with greater ease of use and versatility, and at lower cost. Compared with IR or FTIR, Raman spectra typically have fewer and narrower peaks, which makes it easier to resolve compounds in a mixture. IR spectra are easily swamped by water absorption lines, but Raman spectra are not.”

Also, because the strength of the Raman signal is directly proportional to the average laser power, the greatest amount of Raman signal is generated at the laser’s focus. This can be useful in probing a sample inside a clear plastic bag or vial without opening the packaging, such as a screener might want to do at a security checkpoint.

Raman has become more accessible and affordable with the emergence of low-cost, portable lasers and power supplies, plus high-sensitivity CCD array-based spectrometers for detection, Morris says.

Security, supply chain integrity, and the interdiction of dangerous substances are the main drivers for handheld Raman. “The world can be a dangerous place, and the folks out there whose responsibility is to keep us safe are fighting an ongoing battle to thwart the bad actors,” Morris explains. “Handheld Raman can help combat the rising tide of dangerous activities involving narcotics, explosives, and chemicals,” Morris says.

Many industries, including food, agriculture, pharmaceuticals, and materials, also have need for rapid, reliable trace analysis of chemicals and ingredients for quality control, safety, and authentication.

The success of handheld Raman has inspired manufacturers to build on the capabilities of early units, often for specific applications. The Progeny™ spectrometer from Rigaku (The Woodlands, TX) is typical of an all-purpose, networkcapable handheld Raman instrument that, with proprietary CompleteID software, provides quick yes/no answers for routine materials identification. As its name implies, Rigaku’s Progeny ResQ is marketed to first responders and emergency teams concerned about the presence of drugs, explosives, and poisons. Law enforcement will be interested in the Progeny ResQ FLX, a handheld narcotics analyzer, which holds a standard library of more than a 1,000 narcotics and cutting agents. In late 2017, Rigaku added a library item for fentanyl to the Progeny ResQ instruments.

Similarly, BWTEK (Newark, DE) offers a line of three handheld Raman spectrometers, each covering a specific niche or domain of applications. NanoRam® is a general- purpose device, versatile enough for use in the lab, in the warehouse, on loading docks, or in the field. TacticID®–GP performs noncontact forensic analysis by safety personnel, first responders, police, customs and border patrol, hazmat technicians, and bomb squads. With its thousand-entry library, TacticID®–N is marketed for rapid analysis of suspected legal and illicit drugs, precursors, and cutting agents.

SciAps (Woburn, MA) distinguishes its line of handheld Raman instruments on the basis of handling samples with a high level of fluorescence. Their base model, the Inspector 300, is carried like a lunch box, with the probe jutting out from the front. The Inspector 500 class of Raman uses higher-wavelength Raman excitation (through a 1030 nm laser) for samples containing complex molecules, or levels of impurities that are challenging for the Inspector 300. SciAps Inspector Scope connects to a microscope and a digital camera.

TSI (Shoreview, MN) offers a full line of benchtop and portable Raman instruments, including the EZRAMAN-I and EZRAMAN-NP portable analyzers, the ASSURx® handheld broad-range chemical analyzer (for powders, organics, and liquids), and the POLYMAX™ handheld for on-the-fly plastics identification.

Although Horiba Scientific (Edison, NJ) does not sell a handheld Raman spectrometer, its line of miniature OEM Raman analyzers meets many of the objectives of the “Raman anywhere” philosophy. In fact, one such product is named AnywhereRaman™. These fully equipped spectrometers, which are targeted to industrial applications, require a power supply or electrical outlet but are compact—one Raman component product, the Miniature Raman spectrometer, measures just 64 x 89 x 32 mm (2.5 x 3 x 1.3 inches). AnywhereRaman, which is portable and more of a stand-alone device, comes in at 9.8 x 9.8 x 3 inches.

Necessity is the mother of innovation?

Agilent's RapID handheld Raman spectrometer verifies the identity of raw materials without the logistical and handling steps of moving, opening and sampling.In conventional Raman illumination and collection light is coincident, so the container material dominates the spectrum. By spatially offsetting this excitation and collection, RapID generates a spectrum with greater Raman contribution from the contents. Subtracting the non-offset signal from the SORS spectrum provides a clean spectrum of the contents.

RapID corrects for a wide variety of packaging, regardless of package material type and thickness, and the physical form of test solids and liquids. “Where the container is thin and transparent, RapID behaves as a very efficient conventional Raman system,” says Matthew Bloomfield, PhD, Agilent’s sales manager for Raman spectroscopy.

Geared to the pharmaceutical industry, RapID verifies the identity of a raw material by comparing the sample’s SORS spectrum to that of a validated, verified reference, and uses a pass/fail screen to indicate if the spectra match, based on a predetermined confidence level.

Raman is ideally suited to verify bulk materials, but SORS can be quite sensitive to components, as a UK-based research collaboration (including Edinburgh’s Scotch Whiskey Research Institute) recently demonstrated. Mindful of the widespread use of adulterants in high-value products, researchers evaluated SORS-based handheld Raman to detect chemical markers of counterfeit (e.g. non-potable) alcohol in various spirits.

Technical innovation in Raman extends to how instruments exploit the Raman effect itself. For example, Metrohm’s (Riverview, FL) Mira line of handheld Raman devices are based on orbital raster scan (ORS).

Marketed to the pharmaceutical industry, the Mira M-3 instrument is optimized for raw materials identification using easily customized data collection methods and complies with FDA 21 CFR Part 11; the Mira DS is a fully automated analyzer that includes a library of spectra of explosives, precursors, and narcotics, with onboard mixture analysis.

With ORS, the laser beam is not static but moves in a circular motion, collecting spectra from an area, which makes results more reliable and provides a sampling advantage for heterogeneous material. 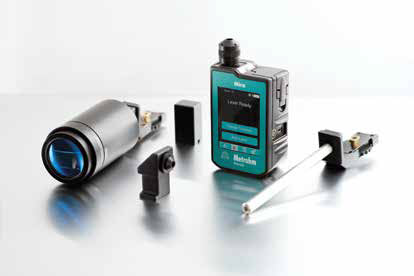 The Metrohm Mira DS and accessories (clockwise from left) – standoff telescope, calibration standard, universal adapter, contact BallProbe®, and right angle adapter.“ORS has been around since 2010, and has been implemented in some lab analyzers,” says Adam Hopkins, PhD, spectroscopy product manager at Metrohm. “But its strength lies in field measurements. Instead of focusing on a single point 250 microns in diameter, ORS sweeps a circle 250 microns thick and 2.5 millimeters wide, which gives a measurement that’s more representative of the sample compared with a non-ORS analyzer.”

This feature provides a more accurate assessment of samples that are mixtures or that are composed of different granular sizes.

“In the lab you can move the sample around to get those advantages. In the field you don’t have that luxury,” Hopkins adds.

During the early days of handheld instruments, the trade-offs between performance and portability were recognized as a given. Thanks to advances in computing and optics, the performance gap has shrunk to the point where handheld analytical instruments are not as bad as was generally believed just a short time ago, and lab instruments (by comparison) are not that much better relative to handhelds.

According to Rob Morris of Ocean Optics, the compromises one might expect from handheld instruments are indeed disappearing. “Lasers, sampling optics, and detectors have become more sophisticated. But more importantly, Raman modeling and algorithm development has led to the assembly of thousands of Raman spectra databases, to make better sense of the Raman data that arise from measuring various samples. These analyses turn mere measurements into answers.”

“Raman isn’t magic. It doesn’t violate the laws of physics,” says Metrohm’s Adam Hopkins. “But it is an active, scattering sensing technique that’s robust and provides very clear molecular information. You blast the laser and maybe one millionth of the photons return to the detector with Raman information, but they’re clear and narrow, and don’t need the corrections you apply for IR scattering. You just point the laser and get an answer back.”