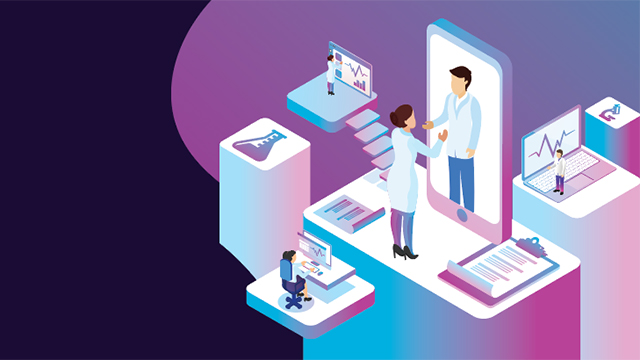 Young adults in the US spend on average nearly three-and-a-half hours on their smartphones each day, according to data collected by Statista. Smartphones have evolved into a necessity in our daily lives— they are the go-to tool we use to communicate, get directions, entertain ourselves with social media and games, capture photographs, and more. Smartphone users also have the luxury of choosing between millions of different apps for their everyday needs and entertainment.

Now, mobile apps are finding purpose in laboratories, helping lab managers stay organized and keep track of their instruments. In recent years, many product manufacturers have built mobile apps designed to make inventory management quick and easy and offer remote monitoring of equipment. For example, data analytics company Elemental Machines (Cambridge, MA) offers a portfolio of intelligent devices to monitor critical lab equipment such as refrigerators, liquid nitrogen tanks, and incubators as well as to monitor the overall lab environment, including factors like humidity, temperature, and air pressure. All data collected from the Elemental devices can be viewed on a lab manager’s smartphone or tablet via the Insights Dashboard. This allows lab managers to know what is going on within the lab at all times and be notified of any situations that require attention during off hours.

“Virtually every scientist knows that the environment can affect the results of an experiment—be it how the reagents or cells were stored, what the temperature or humidity of the prep room was, and even what settings were used on instruments. Our products capture all that data, make it visible to the users, and pull out hidden patterns and relationships that could prove useful and critical for experimental reproducibility as [lab managers] evolve and refine their protocols,” explains Sridhar Iyengar, CEO and founder of Elemental Machines. The company is looking to expand its core product by developing apps that provide in situ data and analytics, so that when lab staff members walk through their labs, they can view current stats for instruments using the app. “[Lab managers] are looking for the same level of capability and performance in the lab as what they get from their daily, personal mobile experiences—seamless experiences and well-designed functionality that support how they work,” says Iyengar.

The added value of a dedicated app for specific instruments is becoming increasingly common and sought after. As another example, the eLABInventory app from Bio-ITech (Cambridge, MA) enables sample identification through an individual’s smartphone or tablet. A phone’s camera can scan barcodes of samples, sample series, storage compartments, and equipment. Users can then retrieve and display all information of a sample directly on their mobile devices. Users can also receive notifications when samples or consumables in the lab inventory are running out of stock.

In addition to enhancing organization and efficiency in the daily workflow of a lab, apps are also being employed as actual research tools for nearly all applications and fields, including clinical, food safety, contaminant testing, environmental monitoring, and more.

At the University of California, Santa Barbara (UCSB), a research team developed a smartphone app with a lab kit that enables doctors to diagnose diseases within one hour. In a study published in EbioMedicine, the team reported that the app and kit system, named SmaRT-LAMP, successfully diagnosed urinary tract infections (UTIs) within one hour. UTIs are one of the most common types of infections across the world, and this simple, low-cost test can improve health care in remote areas around the globe.

Michael Mahan, one of the leaders on the project and a professor in the Department of Molecular, Cellular and Development Biology at UCSB, explained to Lab Manager how SmaRT-LAMP reduces diagnostic time for UTIs from 18 to 28 hours to just one hour. A small volume of a patient’s urine sample is collected and the app uses the smartphone’s camera to take pictures of a fluorescent chemical reaction that detects the presence of bacterial DNA in urine. “The more fluorescence, the more bacteria,” says Mahan. 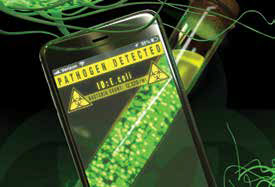 A custom-built app transforms a smartphone into a stand-alone device for rapid diagnosis and treatment of urinary tract infections.Credit: Peter Allen & Brian Long/UC Santa Barbara.The app converts the fluorescent signals into bacterial detection and quantification. “Traditional diagnostic techniques require prior culturing of the bugs from the urine before biochemical characterization. SmaRTLAMP is a direct specimen testing method (no cell culturing) based on rapid DNA amplification,” he says.

After five years of development, the app system can now be tailored to identify virtually any pathogen with the design of appropriate DNA primer for amplification. The main appeal behind selecting a smartphone-based app for this project was the cost benefit and ease of use. Current diagnostic technologies are expensive, which can prohibit those in resource-limited settings from providing rapid, affordable care. Looking toward the future, Mahan says the team hopes that international health organizations will adopt use of the system, and the team would like to modify the system to detect bacteria in blood. “The smartphone is a very powerful tool—detection (camera), quantitation (CPU), and internet connectivity— and these features can be applied to a wide range of scientific disciplines. In the future, we envision smartphone-based kits for home use,” says Mahan.

The Defense Advanced Research Projects Agency (DARPA) is also taking advantage of the benefits of mobile apps for medical monitoring. Through its Warfighter Analytics using Smartphones for Health program, DARPA is funding a four-year, $2.8 million project to build a mobile app that will act as an early warning system for soldiers who suffer from traumatic brain injuries (TBIs) and infectious diseases. According to the Department of Defense, about 22 percent of all combat casualties from Iraq and Afghanistan suffer brain injuries, so the need for a method to quickly identify soldiers’ medical conditions is critical. A team from Worcester Polytechnic Institute (WPI), in Worcester, Massachusetts, is developing machine learning algorithms that will sort through data collected by sensors already built into smartphones and use artificial intelligence to identify “smartphone biomarkers” that could be signs of a medical condition requiring attention. “For example, a [serviceman] who has TBI may exhibit a slow step rate, disturbed sleep, and slurred speech, and avoid light and noise. A [marine] who has an infectious disease may use the bathroom more frequently or get up slowly after sitting or lying down. These are all signs of ailments called ‘smartphone biomarkers,’ which can be detected by passively gathering sensor data on the smartphone and analyzing them,” explains Emmanuel Agu, professor of computer science and director of the Health Delivery Institute at WPI. Agu is leading the project with Elke Rundensteiner, director of the university’s Data Science Program.

As long as soldiers agree to let the app monitor their health, the only other requirement is for them to install the app on their phones. The app gathers data without any interaction and will alert the soldiers only if they are showing signs of a medical condition that requires attention. “This research will likely fuel further research in this direction and gather more momentum. In military zones, this technology would augment (not replace) the periodic but infrequent medical checkups that [servicemen and women] currently get. It could save lives and reduce the number of [soldiers] who have to suffer for the rest of their lives because an ailment was not caught early,” says Agu.

The health care field isn’t the only one taking advantage of mobile apps and technology. “Precision agriculture” is transforming how farmers grow, manage, and harvest crops and livestock. Modern technologies such as robotics, drones, and autonomous vehicles are fueling this evolution— and now mobile apps can be added to the list.

Farmers face many variables when growing and harvesting crops—including unexpected weather, insects and disease, and soil conditions—which can all affect the timeline of when to harvest. A newly developed app from the University of Wisconsin (UW)- Madison aims to better inform farmers who produce cracked corn cattle feed, saving them time and money. The app, named SilageSnap, can calculate corn kernel processing scores right in the field almost immediately. Currently, farmers have to send samples of their cracked corn after harvest to a commercial lab to receive their processing scores. The higher the score, the easier the corn feed is to digest for cows and the more milk they will produce. For example, an “excellently scored” cracked corn can boost milk production by up to 32 ounces per cow per day, according to studies conducted by UW-Madison’s Department of Dairy Science. But often, many farmers receive mediocre or even poor results, forcing them to feed their cows more grain each day to meet nutritional requirements.

The corn must be cracked to break up the tough outer kernel and expose the nutritious starch inside. But achieving the highest-quality cracked corn is a challenge. With SilageSnap, farmers can gather a small sample of corn in the field, place a coin next to it to calibrate pixel size, and take a photo with their phone. The app’s image-processing algorithms calculate the kernel processing score in the field, letting farmers know whether they need to fine-tune their machinery to more effectively crack and harvest the corn. “It all comes down to data,” Brian Luck, assistant professor of biological systems engineering at UW-Madison, said in a press announcement about the app. “How much data can people gather to assess their operations and maximize efficiency?” While farmers don’t have access to lab equipment on their machinery or in the fields, they likely have their smartphones right in their pockets—and the smartphones are equipped with everything needed to test kernel quality that a lab would have. Initial results from UW-Madison suggested that scores returned from the app aligned very closely with official results from commercial corn silage processing score evaluations.

While the use of smartphones and mobile apps has had a slow start in lab environments, managers and researchers are becoming more comfortable with relying on the technology to alleviate some of the burden of their daily responsibilities and streamline processes. Whether you’re remotely monitoring equipment, seeking data and analytics for more informed decision making, keeping track of inventory, or developing a solution to a real-world scientific challenge, mobile apps are a valuable tool both in and out of the lab.

Frequencies Can Easily Be Multiplied without Special Circuitry

Frequencies Can Easily Be Multiplied without Special Circuitry