The cell wall components of gram-negative bacteria, such as E. coli and pseudomonads, are designated as endotoxins. They have a hydrophilic polysaccharide and a lipophilic lipid component and, unlike the bacteria from which they originate, are highly heat and pH-stable. Endotoxins belong to pyrogens, i.e., they can cause fever if they come in contact with mucous membranes or if they enter the bloodstream (with reference to Steck, 2006, [1]).

According to the prevalent pharmacopeias, the defined limit values for endotoxin content may not be exceeded during the manufacturing process of pharmaceuticals.

The objective of this study is to demonstrate that the ultrapure water produced by the arium pro VF water purification system exhibits an endotoxin content that is far below the prescribed limits and that can be used for applications of the categories mentioned above.

A method for detection of endotoxins is the so-called LAL (Limulus Amebocyte Lysate) test, which uses the clotting reaction of a lysate of amebocytes isolated from the horseshoe crab (Limulus polyphemus). This reaction involves a primitive evolutionary coagulation cascade in which proteases are sequentially activated, thus resulting in the formation of a clot.

The coagulation cascade (also called a Limulus Enzyme Cascade, see [2], [3]) can be triggered by endotoxins or alternatively by ß-glucans, which are short-chain polysaccharides found in the cell walls of yeasts and molds. The ß-glucan pathway may lead to false-positive results [1]. Based on coagulation, the liquid, colorless lysate reacts by coagulation to form a solid, milky gel, hence the term “gel-clot method.” As the sensitivity of the lysate is extremely high, it is imperative to rule out a false-positive reaction caused by contamination with endotoxins or ß-glucan. For this reason, exceptionally high purity requirements must be placed on ultrapure water. 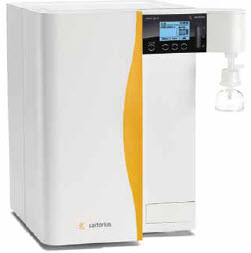 The arium® pro VF system (Fig. 1) is designed to produce ultrapure water from pretreated drinking water and removes any contaminants still present in this potable water. Ultrapure water production requires continuous recirculation and a constant water flow rate, which is achieved using a pump system with controlled pressure. The conductivity of the water is measured at the feed water inlet and at the downstream port, or product water outlet.

The system used in the tests described in this paper operates with two different cartridges. These are filled with a special active carbon adsorber and mixed-bed ion exchange resins to deliver ultrapure water with a low TOC content. Moreover, the unit has an integrated UV lamp that has a bactericidal and oxidizing effect at wavelengths of 185 nm and 254 nm, respectively.

Furthermore, the system has a built-in ultrafilter module used as a crossflow filter. The ultrafilter membrane utilized in this filter retains colloids, microorganisms, endotoxins, RNA and DNA. A 0.2 µm final filter installed at the water outlet serves to remove particulates and bacteria during dispensing of the ultrapure water stream. The process that the unit employs to produce ultrapure water is shown in Figure 2. 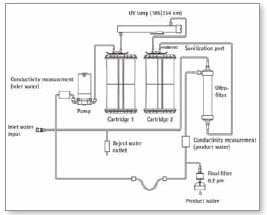 In the tests performed to assay the endotoxin content in ultrapure water obtained from the system, both the gel-clot method and the chromogenic method were conducted.

The lyophilized lysate (Charles River Endosafe R 15006) was dissolved in ultrapure water obtained from the system and frozen by portions in pyrogen-free test tubes. An endotoxin standard series consisting of LPS E. coli 055:B5 (Lonza N 185) was prepared in concentrations of 0.001 EU/ml to 25 EU/ml using ultrapure water from the arium pro VF system. The dissolved lysate was tested using the endotoxin standard prepared in order to verify that it had the sensitivity indicated (0.06 EU/ml). A sample of 100 µl was pipetted into 100 µl of the lysate and incubated in a water bath at 37°C. After one hour, each tube was individually removed from the water bath, turned by 180° and assessed for gel-clot formation.

The chromogenic substrate (Charles River Endochrome K R1710K) was dissolved in ultrapure water produced by the water purification system. This chromogenic substrate and the endotoxin standard samples were pipetted into 96 endotoxin-free well plates in a ratio of 1:1. The absorption of each sample was measured continuously at one-minute intervals over one hour at 405 nm using a TECAN Safire plate reader at 37°C.

In the range of 0.001 EU/ml to 0.05 EU/ml, the gelclot method showed a negative result; i.e. no gel-clot formation (no endotoxins detected; see Table 1). A concentration of = 0.1 EU/ml resulted in the formation of a gel clot. This result shows that within the detection sensitivity limits of the gel-clot method, no endotoxins were present in the ultrapure water filtered by this particular system.

The 60 absorption readings at 405 nm (Figure 3) in the chromogenic method yielded curves with different slopes depending on the specific endotoxin content of the standard samples. The times that were needed to reach a specific absorption were determined using a special computer program and used as the basis for extrapolating the samples with an unknown endotoxin content (for values, see Table 1 - chromogenic assay). As the standard samples with the lowest concentrations (0.005 and 0.001 EU/ml) and the arium water did not attain the extinction value of 1 required to calculate the endotoxin content, they were assessed as below the detection limit.

The values attained with arium pro VF ultrapure water were considerably lower than those plotted for the curve of 0.001 EU/ml. 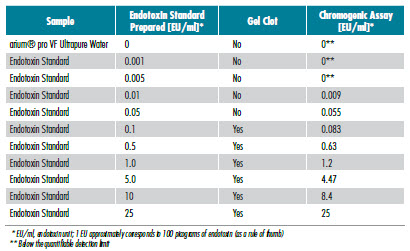 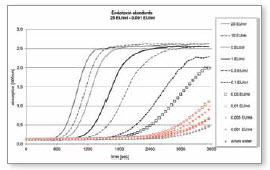 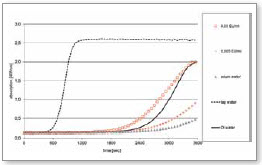 The endotoxin content in water samples was calculated from the values measured using the endotoxin standards and is shown in Table 2.

In the DI water sample, endotoxins of 0.02 EU/ml were detected, which was below the currently valid limits for WFI (water for injection). In tap water, with 25 EU/ml an exceptionally high endotoxin load was found. This finding was not further analyzed. By contrast, an exceptionally low value of < 0.001 EU/ml was measured in ultrapure water obtained from the system, which is far below the usual limits encountered.

The endotoxin concentration is far below the limits required by the United States Pharmacopeia, which therefore makes this water theoretically suitable for use in the manufacture/endotoxin monitoring of pharmaceutical products. Examples of such uses are product formulations, diafiltration solutions, chromatography buffers and water for extraction, rinsing and sanitization steps as well as for cell culture solutions.

Precisely within the scope of cell culture applications one has to pay attention to contaminations in the various steps of these processes. To maintain control over the effects of endotoxins on such cultures and on the sensitivity of cells, particularly with respect to such endotoxins, the media for cell growth must be demonstrably free of detectable endotoxins (see also [5]).

Our special thanks go to Dr. Stephanie Steck of Rentschler Biotechnologie GmbH, Laupheim, Germany, for reviewing the manuscript of this paper and for her constructive discussion on this subject.