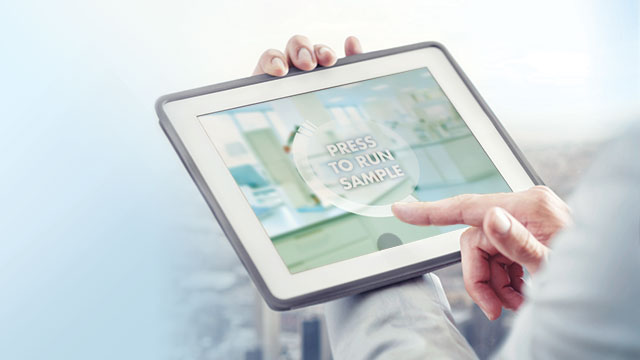 Over the past few years that we’ve covered laboratory gadgets and apps, we’ve continued to see this area grow and become more accepted in the lab. While this year’s releases have added even more benefits to those working in the lab, the most recent trend has been all about helping laboratory professionals even when they are outside the lab.

One recent example is Beckman Coulter’s MobileFuge app for its Optima XPN and Avanti JXN centrifuges that allows users to keep an eye on the status of up to 16 centrifuges from anywhere with an Internet connection. Once their centrifuges are configured so that they are always connected to a lab’s IT network, users can monitor and modify speed, run time, and temperature. MobileFuge also enables users to monitor diagnostic information. 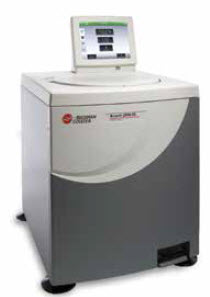 Beckman Coulter’s Avanti JXN-30 centrifuge is one of the models that can be controlled and monitored remotely through the company’s MobileFuge app.Randy Pawlovich, director of product management, centrifugation, at Beckman Coulter Life Sciences, says the company had three main goals in designing the app, with freeing up scientists’ time being the main one.

“The MobileFuge does this by enabling scientists not only to prep runs at any time but [also] initiate them from wherever they are located,” Pawlovich explains.

The second objective was to provide additional workflow support for production or cGMP environments, so that scientists can receive an immediate electronic notification if an issue occurs with the instrument during a run, such as a problem caused by a power outage.

Last, the company “saw the use of personal technology as a means of extending the facilities of the lab by bringing some functions to the customers, wherever they were located, and at a time to suit them.”

Similarly, Panasonic launched the cold storage industry’s first app-based lab monitoring system, LabAlert, at the end of 2014, allowing users to keep an eye on their laboratory freezers or biorepositories 24/7 from their homes or smartphones. This means that if disaster strikes—a freezer failure, for example—users are notified right away and given the information they need to make the best decisions possible.

“With LabAlert, an infinite number of probes can be installed in equipment such as biorepositories or freezers, pulling together data from diverse geographic sites,” Panasonic says in a recent Lab Manager How It Works article. “LabAlert equipment independently logs continuous temperature, CO2 readings, opened doors and more. Each probe sends data to a local receiver, and the data is then transmitted to the cloud and accessible through a web-based platform.” 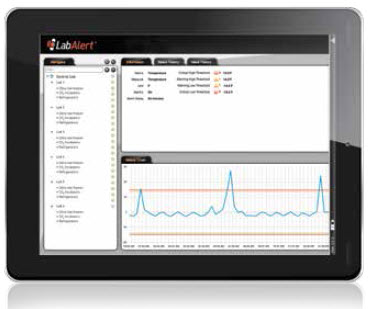 Panasonic launched its app-based lab monitoring system, LabAlert, at the end of 2014.The system also sends specific alarms to a user’s smartphone or tablet, depending on the severity of the emergency, detailing how the user should respond and how quickly he or she should do so. Apps like this could mean the difference between losing or saving hundreds of critical, irreplaceable samples.

LabAlert and MobileFuge aren’t the only remote monitoring options out there, as SCIEX launched its StatusScope™ service in June 2014 that supports most SCIEX mass spectrometers and Eksigent Micro and Nano LC products. With three user levels—lab manager, lab director and technician—the system enables users to view instrument performance and workflow status remotely from their smartphones, capturing errors quickly to minimize downtime.

Like LabAlert, StatusScope features a variety of different alarm triggers, though users can choose these themselves, and notification processes that are communicated to the SCIEX Technical Assistance Center, where the SCIEX team can help quickly resolve any problems.

SCIEX’s StatusScope™ service, launched in summer 2014, supports most SCIEX mass spectrometers and Eksigent Micro and Nano LC products.“This service was built from the ground up with input from our customers,” explains Andy Wight, director of the service product portfolio for SCIEX. “Users can access and monitor their instruments from anywhere, via a smartphone or other device over the Internet, in addition to having instrument history at hand.”

Steve Sylvester, a researcher at Astra Zeneca, was pleased by his experience with the service.

“Having a holistic system to incorporate all peripheral devices and to document system maintenance and changes (e.g., switching of peripheral devices) is the ‘holy grail’ for our regulated environment,” he says.

Most recently, at Pittcon 2015 in New Orleans, LECO announced that it will be including an option for mobile viewing with its Cornerstone brand software for its new 832 series of sulfur/carbon analyzers. Cornerstone Mobile provides access to data, plots, and instrument status from the user’s smartphone, tablet, or desktop computer, and works with either Android or Apple smartphones or tablets. 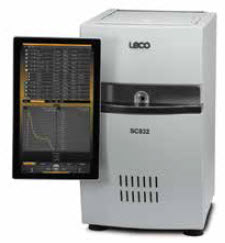 LECO’s Cornerstone Mobile option for its 832 series of sulfur/ carbon analyzers provides access to data, plots, and instrument status from a user’s smartphone, tablet, or desktop computer.Those concerned about security issues with such mobile access apps can rest easy, as the majority have security features such as password protection built in, allowing lab managers to restrict access to certain information and provide controls to only those with the proper security clearance.

While remote/mobile access is a key trend we’ve identified in this year’s crop of apps, there have also been several releases that help lab professionals within the lab as well. Just last month, MaestroGen released a smart lab device called iTrack, a pipetting tracking tool that is completely controlled and powered by an 8" Android tablet. The device is “smart” since it aims to solve pipetting errors by “knowing” actual pipetting locations through the use of optical sensors to detect the locations, then flagging those locations with sounds and lights and recording every pipetting movement in a log file.

“Smart devices are usually controlled by hand gestures,” says Andrew Lin, marketing manager for MaestroGen. “Like human fingers, pipettes can be detected by optical touch-screen technologies.” He adds that the Android tablet can be used as a standalone tablet for other lab tasks.

MaestroGen’s iTrack “smart” pipetting tracking tool.Another recently released gadget that helps both in and outside the lab is Micronic’s handheld wireless 1D/2D code reader, the MINI, which allows users to read 1D and 2D tube and rack codes almost instantly. The system’s high-capacity lithium-polymer battery provides a minimum of 15,000 2D scans or approximately 17,000 1D scans per charge (10 to 12 hours of continuous use) and is easily recharged through a USB connection. It is also Bluetooth-enabled for iOS, Android and Windows compatibility, meaning the instrument’s output can be read directly into a LIMS, a PC Excel spreadsheet, or Notepad.

Other apps released over the past year focus on providing users with more information about possible equipment purchases or other changes to their labs. Sartorius’ ambr15™ iPad app, for instance, provides users with an “iBrochure” that provides an overview of TAP Biosystems’ new ambr15 micro bioreactor, giving bioprocess professionals a chance to familiarize themselves with the system before purchase, no matter where they are.

Micronic’s handheld wireless 1D/2D code reader, the MINI.“Bioprocessing professionals like to share information on their iPads with colleagues and are sometimes in places where using a paper brochure or the Internet is either impractical or expensive,” says Dr. Barney Zoro, ambr product manager at TAP Biosystems. “We have listened to this request, and now they can access all the key learnings we have gathered from ambr15 adopters in major pharma, biotechs, and CROs in one handy iBrochure. This is a very useful resource and will make it easy for scientists to share the information to support presentations to colleagues and bid for budget funding to purchase and implement the ambr15 micro bioreactor system.”

Those renovating or designing a new lab will find a good resource in Sovella’s iWorkbench iPad app, a 3D design tool that walks users through the process of building a workstation for their specific applications. Released last summer, the app allows lab professionals to choose from a variety of bench sizes, upright options, and accessories— including lights, shelves, and power— while watching the workstation take shape on their iPads.

TAP Biosystem’s iBrochure for its ambr15 micro bioreactor allows users to try the system before they buy.At Pittcon this year, Thermo Fisher Scientific announced the release of the AppsLab Library of Analytical Applications, an online repository that gives users access to a huge library of chromatography application expertise, allowing scientists to find and download the best separation methods for their applications. Traditionally, lab professionals would have had to search the Internet for the right method, download it, adapt the method to their particular application, get the proper equipment for that method, and, finally, manually program the method.

“This process would literally take you days,” says Jakob Gudbrand, general manager for chromatography at Thermo Scientific, adding that with AppsLab, that procedure is reduced to five steps that take only a matter of hours.

Sovella’s iWorkbench iPad app is a 3D design tool that allows labs adding new workstations to visualize any changes before making final design decisions.Currently, the methods used on AppsLab are submitted by Thermo Scientific experts and customers, but the company has considered opening it up to submissions from other companies.

Last, for biologists who aren’t fond of math, New England Biolabs’ (NEB) NEBioCalculator™ could be a good online tool to have. The new conversion and calculation tool offers benchside support for molecular biology experimental planning and supports several commonly used biomath needs, such as molarity calculation, OD260 conversion, ligation calculation, and mass/moles conversion for both dsDNA and ssRNA. According to NEB, in contrast with other online tools that use a “one size fits all” single-unit model, the NEBioCalculator provides calculations based on user-specified units.

“Our customers can educate themselves on an application, identify reagents needed, and design their experiments—all while visiting NEB’s website,” says Tanya Osterfield, manager of digital marketing at NEB. “NEBioCalculator is a useful tool that will help improve our customers’ user experiences, as we strive to provide unmatched scientific and technical support to our customers.”

Thermo Scientific’s AppsLab Library of Analytical Applications is a fully searchable online, analytical method repository where users can find applications with detailed method information, chromatograms, and related compound information.As we’ve concluded in past articles, the lab apps and gadgets market doesn’t show signs of slowing down anytime soon. For example, Pawlovich says MobileFuge has gotten an excellent response so far, with 1,000 downloads as of the end of March. But where does the lab app and gadget market appear to be going?

Lin, for one, hopes the release of the iTrack will lead to the acceptance of other similar instruments in the lab.

“We believe iTrack is the first truly smart lab device,” he says. “It will be interesting to see whether it will facilitate the adoption of more smart technologies in labs.”

New England Biolabs’ NEBioCalculator™ is a great tool for biologists who hate math.As far as apps go, Pawlovich says that he sees the kind of network connectivity offered by MobileFuge as something that will become a standard feature with all lab equipment. Investing in equipment that provides mobile access now will help labs stay ahead of the game.

“When you invest in instrumentation that you are committing to use for long periods of time, it is to your advantage to have this now,” Pawlovich says. “If you purchase something without this level of network connectivity, you could be without its capability for possibly ten or more years. The impact on workflow, lab budgets and the timely delivery of results will increase over time.”

Alcohol Abuse and Workplace Absenteeism Likely Worsened during the Pandemic

Alcohol Abuse and Workplace Absenteeism Likely Worsened during the Pandemic

This Lab Allows Scientists to Conduct Experiments Remotely at Any Time

This Lab Allows Scientists to Conduct Experiments Remotely at Any Time