ITHACA, N.Y. —Rheonix Inc., a developer of fully automated molecular testing solutions, has completed development and testing of a microfluidic system and assay to simultaneously detect host anti-HIV antibodies and viral RNA in a single specimen of saliva or blood. The company’s findings are outlined in the recently published research article, “A Rapid, Self-confirming Assay for HIV: Simultaneous Detection of Anti-HIV Antibodies and Viral RNA” in the Journal of AIDS & Clinical Research. The Rheonix system will improve HIV testing by detecting early, acute HIV infection and addressing the well-known “seroconversion window” when antibodies are not yet detectable, thus eliminating the need for multiple patient visits to health care providers. 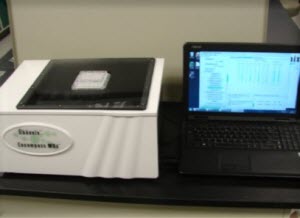 Image courtesy of RheonixThe assay is performed on the Rheonix CARD® (Chemistry and Reagent Device). Once a raw sample is placed on the Rheonix CARD, the automated platform runs with no user intervention through the process of sample extraction, purification, amplification and detection. This eliminates the need for multiple pieces of existing equipment, helping to make the testing process quicker, more efficient, less expensive and less likely to result in human error.

The global HIV/AIDS epidemic continues to be fueled by the large number of individuals who are unaware they are infected, or who have limited access to advanced diagnostics. Governments and nongovernmental organizations around the world support various programs to reduce the impact of the disease by encouraging more frequent testing. Current technologies require confirmation of a positive test result by a second, more sensitive and more specific test. However, low-resource settings often lack the sophisticated equipment, trained personnel and facilities required to effectively test clinical specimens, and they often rely on simple “dipstick-like” tests that lack sensitivity and specificity. In addition, the second confirmatory test requires a second visit to a health professional that often does not take place.

“Our technology meets the needs of settings with limited resources. The assays are rapid, sensitive, specific, easy to perform and inexpensive,” said Greg Galvin, PhD, CEO and chairman at Rheonix. “This combined HIV screening and confirmatory test will have a significant commercial and social impact that we’re excited to see materialize.”

“In collaboration with scientists at NYU, we were able to demonstrate how our system can detect both the HIV antibodies and the actual viral RNA, even in the earliest stages of the disease, to immediately confirm whether or not a patient is infected,” said Richard Montagna, PhD, FACB, senior vice president for scientific and clinical affairs at Rheonix. “The fully automated testing system will allow resource-limited regions of the world to have their first-ever opportunity to perform simultaneous serological testing and molecular confirmation for HIV. Quick, complete and accurate appraisals of patients’ infection status gives health care providers in any setting the information needed to facilitate ‘Test and Treat’ and ‘Treatment as Prevention’ approaches to controlling the HIV epidemic.”