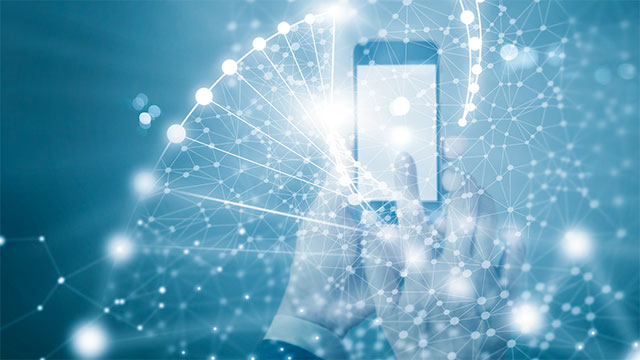 In 2010, “app” was voted the word of the year by the American Dialect Society. Since then, the popularity of apps has exploded, prompting the number of apps available for both the general public and more specialized audiences, such as individuals working in science labs, to skyrocket. For lab managers, researchers, and bench scientists, scores of apps are now available to simplify and improve a range of processes in the lab. This past year has seen the development of, and improvements in, apps with various uses. Key trends in functionality include facilitating the management of inventory, equipment usage, and people in the lab; enabling monitoring of lab processes from a distance; and providing the option to use mobile devices to accomplish tasks that would traditionally be done manually or require the use of an instrument in the lab.

Managing a lab is a demanding job, to say the least. Tasks from tracking the movement of inventory in and out of the lab to facilitating communication among lab members are not only challenging but also consume large portions of time. Several recent apps have been developed with the aim of assisting users with running the day-to-day operations of the lab and tracking variables of interest in the lab environment over longer periods.

To help labs keep track of their stock, AgileBio has developed LabCollector Stock Manager. The app allows users to scan bar-coded items with their Android camera in order to monitor the movement of items like chemicals in and out of the lab and ensure the inventory is maintained. Data can be accessed from any connected computer or device, and data can be exported in many standard formats. Pierre Rodrigues, the founder of AgileBio, comments, “With this new app, we wanted to allow lab staff to use the mobile devices they all already have on them to quickly remove chemicals from the shelves and trace those movements. For the more active labs, the same app can be used on an industrial PDA instead. But using personal phones will help avoid staff having to look for the proper device hidden somewhere in the lab.” 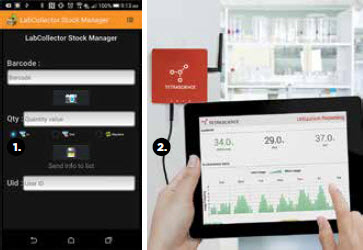 1. LabCollector Stock Manager app from AgileBio.
2. Utilization Reporting app from TetraScience.A recently released utilization app from TetraScience provides meaningful reporting and analytics on capital instrument usage in the lab. Relying on the time series wattage data from the power meter, the app can track when targeted instruments are in use, idle, or off. With the insights gained from the app, labs can ultimately save money on unused equipment and service contracts, optimize scheduling of equipment use, and plan for future capital expenditures.

Last year, C&EN News reported on messaging software called Slack that is becoming popular among large academic labs. Slack helps lab heads manage their groups through online chat rooms that are organized by task, project, or topic. The messaging app allows users to forgo the formality of email, and instead discussions take place in user-subscribed channels so that lab members always have the opportunity to participate in the chats that are relevant to them. Slack can be downloaded for free, or an upgraded version with advanced functions, including search, can be purchased for a monthly fee.

Data from a distance

Often a need arises to keep tabs on the lab environment or an experiment in progress from outside the lab. In other cases, data collection and measurements may occur away from the lab. Maintaining a connection with the lab or its members is often necessary when working remotely, but it can pose a challenge. Certain mobile apps create that integral link with the lab, allowing users the freedom to collect or view their data from a distance.

Elemental Machines has launched a suite of solutions that allow researchers to keep a close watch on laboratory equipment and environments from anywhere. The major aim of these products is to improve experimental reproducibility by continually measuring potential sources of experimental variability, such as temperature, humidity, vibration, light, and instrumentation. The company’s offerings include networks of intelligent sensors that passively monitor the lab environment, a web-based app called Elemental Insights that provides real-time data on variables of interest, and text and email notifications whenever the sensors encounter an anomaly. 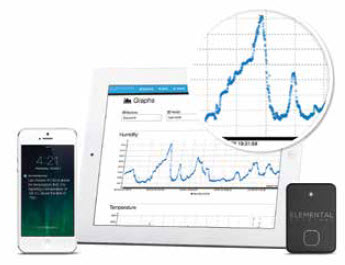 Elemental Insights app from Elemental Machines.In a similar vein, the new T&D Thermo app for iOS and Android allows users to use their smartphone or tablet to view and download data obtained by T&D’s RTR-500 Series wireless data loggers. Data collected by the loggers include temperature, humidity, CO2, voltage, and current. Additionally, T&D’s free cloud WebStorage Service provides up to 20MB of long-term cloud storage for customers’ files. Touting the prospect of helping users achieve a “lab/ life balance,” the Instrument Connect remote monitoring app from Thermo Fisher Scientific keeps individuals connected to any Thermo Fisher cloud-enabled instruments and benchtop devices, including the Applied Biosystems™ QuantStudio™ 3 and 5 real-time PCR instruments. With the app, which is compatible with iOS, it is possible to monitor run progress and view plots and filter by sample or target in real time from anywhere. 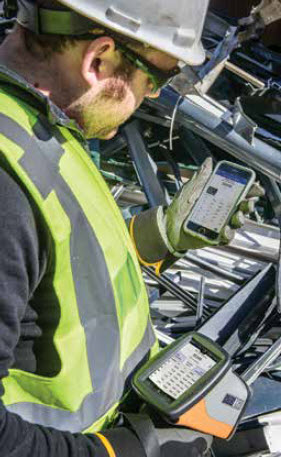 OiConnect app from Oxford Instruments.Telstar has developed a new mobile app that keeps track of temperature and pressure parameters in real time during the freeze-drying process. The app is customized for use with the LyoBeta and LyoBeta Mini lab freeze-dryers— the standard and compact versions of a freeze-dryer designed for experimentation and formulation in pharmaceutical freeze-drying processes. With this app, any Android-based portable device can remotely connect to the equipment, and users have the option to receive alarms related to a range of variables.

For fast sharing of data from their handheld X-ray fluorescence analyzers, Oxford Instruments has come out with the OiConnect app for use with iOS mobile devices. The app pulls in test data in real time, allowing users to share it on the spot with colleagues, suppliers, and customers. Additional details such as weight, batch number, and photos can be easily added. A computer connection is not required to generate a report and share data; only a Wi-Fi or mobile data connection is needed.

At Pittcon this year, Autoscribe Informatics launched the Matrix Gemini Field Analytics System, which is designed to operate on an Android or mobile device and sync with the Matrix Gemini LIMS database. Users can record data off-line and upload it to the LIMS once an Internet connection has been established. The app is ideal for those collecting environmental samples in remote areas, but as Tim Daniels, marketing manager at Autoscribe Informatics, explains, the app would also be useful for individuals working in a lab facility where the Internet connection is unreliable, such as in a cold room.

Some apps serve as a bridge between instruments in the lab and the user’s device. Others can actually transform the device into a functional instrument that can analyze samples both in and out of the lab. Often these apps solve specific problems that traditional instruments do not address, with high accuracy and at a lower cost. 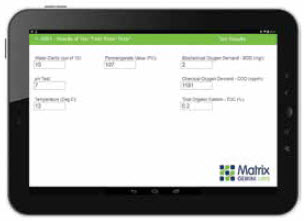 Matrix Gemini Field Analytics System from Autoscribe Informatics.Developed by researchers at the Bioinformatics Institute, Agency for Science, Technology, and Research (A*STAR), Singapore, in 2015, GelApp is an Android app that analyzes gel (agarose and PAGE) bands produced by gel electrophoresis—a routine but traditionally error-prone process in biomedical research. As the app developers write in the journal Electrophoresis, “There are clear avenues for GelApp and other gel documentation software to alleviate the tediousness of accurate band size detections.” The newly developed version, the GelApp 2.0, which is freely available for both Android and iOS, features improved accuracy compared with the original for both protein and DNA detection.

Another recent product of A*STAR is a new Android app that could change how microbiologists collect their data. While bacterial cultures are normally counted manually, automatic cell counters are available to simplify the task, but they can be costly. According to an article published in Nature Methods, the APD Colony Counter app suite for Android addresses an enduring challenge in cell counting: correctly detecting clustered colonies compromising accurate counts. “Leveraging the smartphone camera, we developed an app that processes images of colony plates and automatically counts them,” the authors write. The app implements a watershed algorithm that provides accurate counts by creating optimal contrasts for colony detection that are better than those of other image-processing algorithms.

With the Hanna Lab app from Hanna Instruments, available for iOS and Android, a smartphone or tablet can be transformed into a full-featured pH meter when used in conjunction with a HALO pH probe. The app collects pH and temperature data and allows it to be stored or shared easily. Functions include calibration, measurement, data logging, graphing, and data sharing.

Although the idea of a smartphone spectrometer is not new, researchers at Washington State University have recently developed the first low-cost, portable smartphone spectrometer that can analyze several samples at once. The app-like feature, which currently works only with iPhone 5, detects human interleukin-6 (IL-6), a known biomarker for certain cancers. “The spectrometer would be especially useful in clinics and hospitals that have a large number of samples without on-site labs, or for doctors who practice abroad or in remote areas,” Lei Li, assistant professor in the School of Mechanical and Materials Engineering and lead developer of the app, said in a Washington State University news release. “They can’t carry a whole lab with them. They need a portable and efficient device.”

What else is new?

Thermo Fisher Scientific recently launched the first-ever web- based pipetting app. Developed for use with their new Bluetooth-enabled E1-ClipTip electronic pipettes, My Pipette Creator enables centralized programming of connected pipettes. The app also allows users to store protocols and share them between pipettes and lab members. “Programming protocols for use with individual electronic pipettes can be a time-consuming, tedious, and inefficient process that is prone to human error,” says Kelly Miller, senior business director for liquid transfer products at Thermo Fisher Scientific. She notes that the new app “allows multiple users to connect and sync several electronic pipettes at once using their PC, enabling increased laboratory efficiency and productivity.” 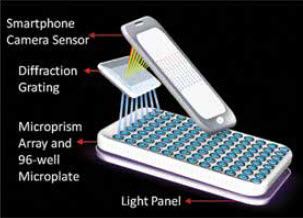 Drawing of smartphone spectrophotometer device.With the MobileFuge app from Beckman Coulter, available for iOS and Android devices, Avanti JXN and Optima X series centrifuge users can monitor and control up to 16 centrifuges from their mobile device. The app’s data management capabilities are particularly suited to shared lab environments. A recently added instrument scheduler plug-in provides greater convenience by allowing users to reserve instruments for use.

These are just a few of the latest launches and updates from the world of lab apps, demonstrating that apps are rapidly gaining traction as important tools for science labs. With a growing pipeline of apps being developed by instrument manufacturers and scientists, often for free or a nominal cost, lab workers are reaping many benefits—among them, increased efficiency and the freedom to spend more time away from the lab.