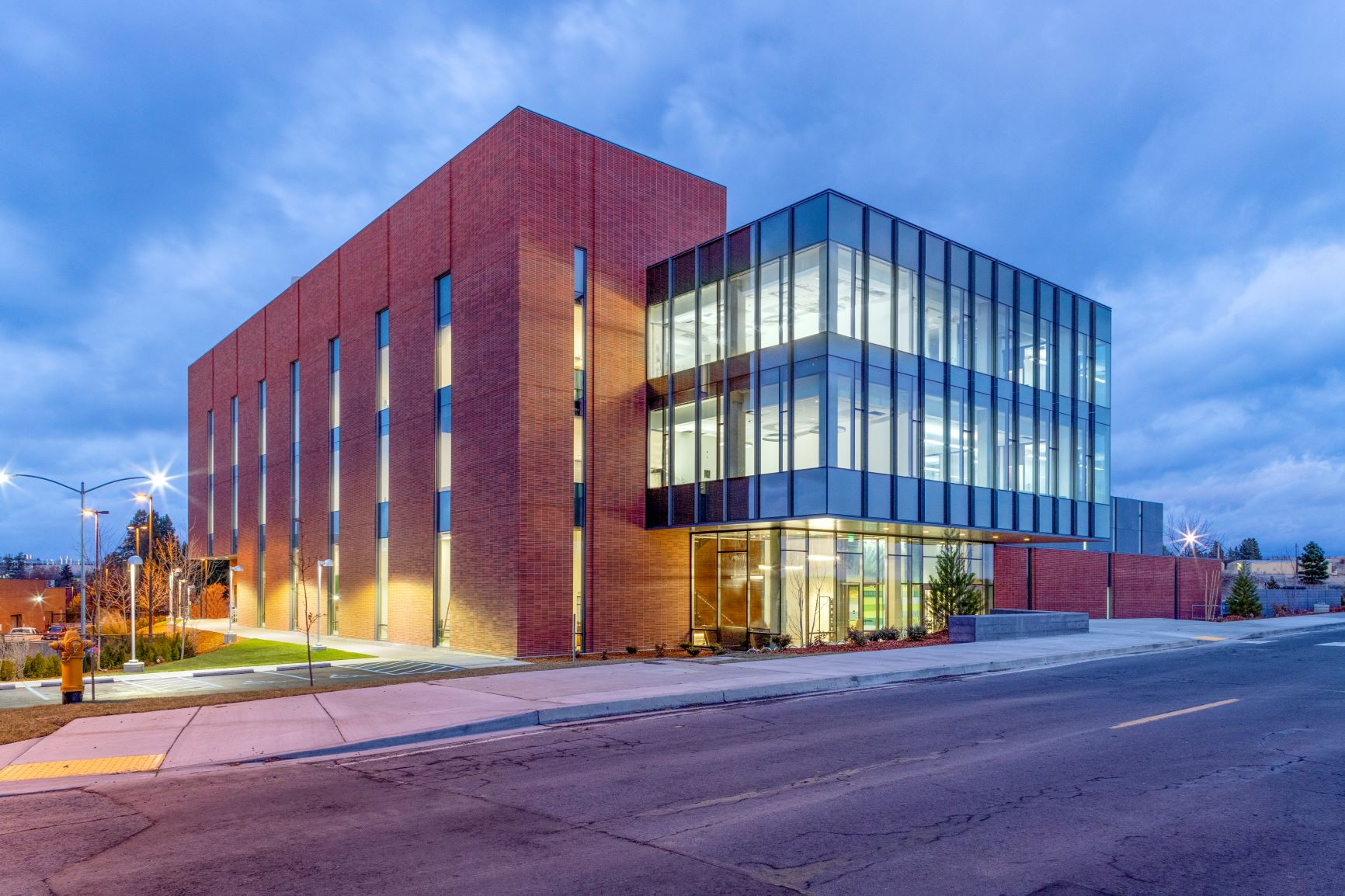 Phase II as of 12-09-2020: A new wing of the Paul G. Allen School for Global Animal Health at Washington State University will house the WADDL program, a lab performing animal disease detection and proof of negative testing services.
RICK KEATING

Washington State University is home to the Washington Animal Disease Diagnostic Laboratory (WADDL), a state, regional, and national reference laboratory that performs animal disease detection in all species, and advocates for regional and international trade through “proof of negative” testing for animal industries. As the only internationally accredited veterinary diagnostic laboratory in Washington State, WADDL protects against emerging and foreign diseases and food borne illnesses, and provides first alerts for disease outbreaks. The research and testing done at WADDL involves many types of animals, including livestock, poultry, and fish, as well as pets.

The WADDL program, created in 1974, is of vital importance to the mission of the Allen School for Global Animal Health, originally The School for Global Animal Health, which was established in 2008 following the largest private grant in WSU history, courtesy of the Bill & Melinda Gates Foundation. The Paul G. Allen Family Foundation donated $26 million in 2010 to establish the Paul G. Allen School for Global Animal Health, with a focus on the health of animals as a means of improving the health of humans and the environment. Some of the work undertaken by the school includes the development of a model for zoonotic disease surveillance and detection in Sub-Saharan Africa, to examine disease spread between animals and people to develop current and future preventive programs. WADDL has also performed extensive research and testing related to classical swine fever, bovine spongiform encephalopathy (mad cow disease), and avian flu, among other diseases. 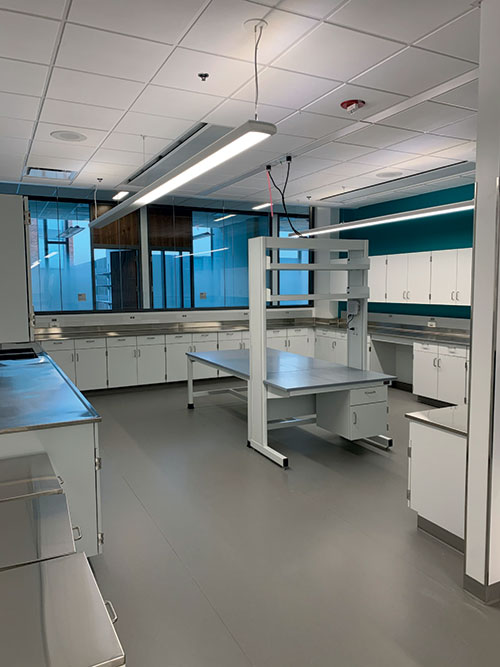 WADDL has been housed in WSU’s Bustad Hall in Pullman, WA since 1978 (the program also contains the Avian Health Laboratory, on the campus of the Western Washington Regional Extension Center in Puyallup, WA). The following year, it became the first laboratory in the western US to achieve accredited full-service laboratory status under the auspices of the American Association of Veterinary Laboratory Diagnosticians, and it’s been re-accredited continuously since. The lab provides bacteriology, parasitology, pathology, serology, toxicology (through the Analytical Sciences Laboratory, University of Idaho), and virology services. Its services cover all of Washington State, much of Idaho and the Pacific Northwest, plus Alaska and Hawaii. Not only does WADDL serve the private sector, it also provides support for the WSU veterinary teaching hospital, university herds and flocks, WSU laboratory animal programs, and the Field Disease Investigation Unit (FDIU).

“There's four basic things that we do,” says Timothy Baszler, executive director at WADDL and associate director of disease surveillance at the Paul G. Allen School for Global Animal Health. “We diagnose animal diseases—all kinds of them—from companion animals to agricultural animals to wildlife, to snakes and salamanders, to cattle, dogs, and everything. Then we diagnose zoonotic disease, so we deal with public health—those diseases that animals and people share.” He continues, “We do a fair bit of promoting of economies, so we promote trade. Our clients make products that they pass all over the world. So, for example, in Washington, the salmon fish industry is quite big and they sell eggs all over the world, and they can't move those eggs unless they're free of very particular diseases. So, we do a lot of what we call proof of negative testing. You've got to prove you don't have something before another country will accept it. I think every diagnostic lab in the country does that. The last one is just food safety testing. For example, we have a chicken industry in Washington where they mostly sell eggs. To sell those eggs, you have to test and they have to be free of salmonella and certain diseases that you can catch from food. So, it's not only the animals you test, but the products that come from the animals that are sold somewhere. That's kind of the basic function of the lab.” 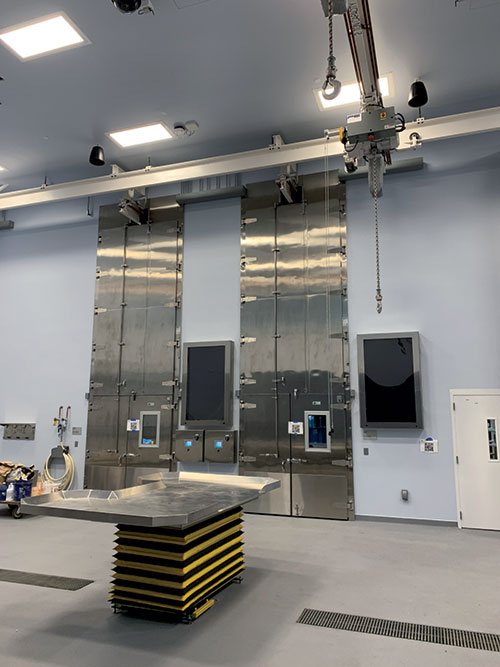 A view of the doors to cold room storage from the necropsy suite.
Bouten Construction Company

WADDL’s testing demand has increased more than 250 percent since the 1970s, with about three million tests conducted in the last 10 years. The university in 2018 approved plans for the Global Animal Health Phase II Building (GAH2), a new wing on the Paul G. Allen School for Global Animal Health, to accommodate the WADDL program and its modern biosecurity and workflow needs. The site will contain diagnostic laboratories, research and development laboratories, and an instructional laboratory utilized by veterinary students, post-DVM and other health professionals, and both graduate and undergrad students.

Moving between the original and new areas of the building presents unique challenges, says Baszler, noting that a concern was how to mesh not only the architecture of the existing building and the new wing, but how to properly integrate their functions as well. He credits the design team with helping him and his staff see that reality. Susan Clark, a lab planner with Perkins+Will, was a member of that team. “It became a really interesting problem to solve. We had everything from giant horses down to dogs and smaller animals—potentially the specimens would be coming in in all different ways,” she says. “So, it was kind of, in some ways, just like a human facility, except exclusively for diagnostics for animals.”

Energy and light also posed a challenge to the design team. Labs are well-known “energy hogs,” and biosafety labs use an especially large amount of energy. “We had initiatives like reducing the amount of lighting that was needed in the building. We had a lot of daylight. The labs are day lit through having very, very open, glassy areas—you can use borrowed light into the labs. We had active chilled beams to help with energy, radiant heating, and some zone heating and recovery,” says Clark.

Alex Clinton, also a lab planner with Perkins+Will, comments that the necropsy suite, which is a high bay space, is a major energy hog. “You’ve got a huge room volume there. You've got odors to deal with that you need to make sure you take account of. So that's one of the things we certainly looked at—trying to really intelligently design and lay out the HVAC so that we had a good laminar flow,” he says. 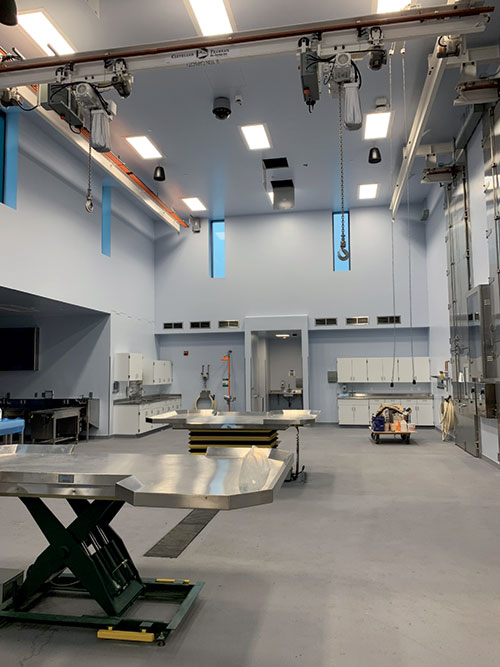 A view of the necropsy, high windows, and overhead crane system in the GAH2 facility, a unique feature to this building.
Bouten Construction Company

Baszler is an auditor for labs around the country, and says that the natural lighting in the new WADDL facility is something that really stands out among all the other labs he’s seen. The bridge crane that WADDL will utilize is also a unique aspect that will be a great help to those who work in the lab. Video screens mounted throughout the facility announce the sample flow to the labs, so people know when they need to pick up their samples from testing or perform other tasks. Clark adds that the original facility had a lot of gowning and un-gowning that had to happen as people moved in and out of the BSL-2 areas, and her team “worked really hard to make it so that didn't have to happen” in the new lab, she says, by implementing separate stairwells and elevators for different zones. “Between where the specimens come in, everything is in the BSL-2 zone. And when you come out into the office, then you're in a quasi zone. But then everything flows from that sample processing. We spent a lot of time talking through that and how all the samples get up to the labs, so that was as seamless as possible and there wasn't this transfer from one zone to another.”

The vision of the two buildings, says Baszler, was to foster collaboration between different researchers doing different jobs. “It’s not often that diagnosticians doing everyday surveillance and researchers doing bench research and discovery mix. Now we have two buildings adjacent to each other where we want them to mix. So, these lunch and break areas and courtyards that are accessible to both…our hope is that it fosters some very unique, personal interactions,” says Baszler. “Kind of a different way to think about getting rid of the silos in research and diagnostics and getting them together, because they can get siloed.”

That sense of cooperation carried over to the project team planning out the site expansion, adds Clinton. “Overall, the whole team just worked really well together,” he says. “You can’t put a price on it—it just makes such a difference in the whole process.”