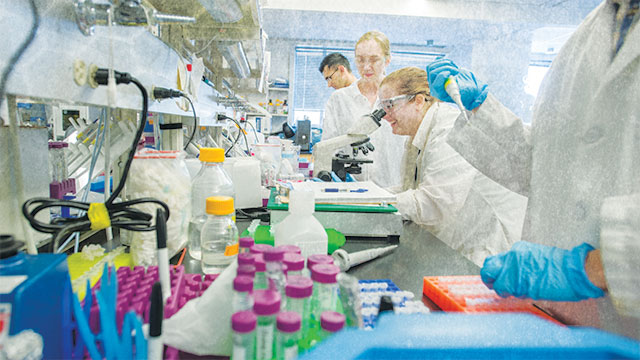 All photos by Rensselaer: Mark McCarty

Despite its size, Dr. Mariah Hahn’s lab at Rensselaer Polytechnic Institute is an important part of the broader tissue-engineering research community. The lab has two main goals: creating disease models to more effectively screen potential therapeutics before they are tested in small animals and designing better materials to help organs and tissues repair themselves following injury or scarring.

“Our lab is heavily cell culture based. Essentially, we grow cells extracted from human or animal tissue, place them on various biomaterials, and then examine what the cells do in terms of repair or regeneration,” Hahn says. “Or, in the case of disease models, we try to create a cell-biomaterial system that will mimic the disease, and then we ask how various drugs or therapeutics affect the cells.”

While Hahn doesn’t see her lab as unique in the tissue engineering world, she admits it is unusual for a lab with five staff members—four graduate students and one postdoc—to focus on three different tissues—bone, vocal fold, and vascular. However, she explains the three areas aren’t that different, as each of these tissues has a core mechanical function. Bone that is too brittle or soft doesn’t function properly, and blood vessels don’t burst during exercise due to their remarkable strength, yet they are pliable enough to readily bend and twist with the body. Vocal folds allow us to speak because they are able to move back and forth very rapidly. Scarred vocal folds are too dense and stiff to function properly, leading to a raspy voice or a complete loss of speech.

In the area of bone, the Hahn Tissue Lab is collaborating with Texas A&M University on the creation of a shape memory polymer foam that helps heal skull injuries or defects. Her lab is testing different formulations of the foam in vitro to identify the most promising materials before the Texas A&M team tests the foam in small animals. Hahn’s lab is also working on building an in vitro model of osteoarthritis.

“Although there are several reasons for synthetic graft failure, one of the key issues relates back to the complex mechanical properties of arteries and the challenge of matching those properties with a synthetic material,” she says. “That’s one of the reasons why current synthetic grafts fail—they’re strong, but they’re too stiff, and that causes a lot of problems.”

Issues with vocal folds, on the other hand, are often seen in so-called voice professionals—singers, teachers, executives, or other individuals who must regularly exert themselves vocally. They are also seen in smokers, whose habit weakens these tissues, making them more susceptible to damage and scarring over time, as well as in neck- and throat-cancer patients who have radiation treatment. Hahn’s lab is working on ways to design materials that can be injected into scarred vocal folds to soften the scar and allow new functional tissue to form.

Looking ahead, the lab plans to focus more on the effect of inflammation on both tissue disease and regeneration, as many diseases have a key inflammatory component, Hahn says. That will involve a continued strong focus on in vitro disease models so that more effective drugs or therapeutics can be rapidly evaluated and refined.

“My movement into that area is also driven by my own personal experiences,” Hahn explains. “I have a child with severe disabilities [that] are known to have a substantial inflammatory component. Basically, his body is attacking itself—doctors can’t stop the disease progression with their current tools. What I see is that there are huge unanswered questions in the chronic inflammatory diseases that are debilitating many people, not just my son. I would find it deeply meaningful to contribute to helping find solutions in this area.”

Apart from the challenges of the research itself, Hahn, like many other scientists, must continually seek funding to support her work. She must also manage and guide the researchers in her lab. She says the first issue has become increasingly more challenging over the past 10 to 15 years, with federal funding having stayed essentially flat for over a decade—despite the increasing number of researchers—coupled with the budget cuts associated with sequestration.

“I understand, of course, that we as a society want only good science to be funded, but there is a lot of good science that is currently not getting funded,” Hahn says. “This situation is going to have repercussions for our country as a scientific leader.”

Related Article: A New Method for the 3-D Printing of Living Tissues

Adding to that challenge are the rising costs of living, grad student salaries, and supplies such as reagents. For example, the cost of one 500 milliliter bottle of a reagent Hahn’s lab uses often—certified fetal bovine serum of US origin—has gone from $150 to $700 in the past 12 years. Tackling these increasing costs means more time writing grants to get funding, Hahn says.

Being a manager, something that many researchers struggle with, is another challenge for Hahn. It’s her grad students and staff who do the lab work, while she must train, manage, and guide the students to be the best scientists they can be.

“You have to be a manager when you’ve had almost no training in being a manager,” she says. “We as scientists are trained to perform and design experiments to rigorously test scientific hypotheses.” She adds that many graduate students initially still expect to have the same holiday schedule and focus on classes as undergrads do, when in reality being a grad student is essentially a full-time job with a primary research focus. Being a manager means helping graduate students make that transition as well as dealing with conflicts between lab members. “I’ve had fights between lab members, all the [same interpersonal issues] you have in companies,” she says.

In spite of those issues, Hahn is quick to say how much she loves her job and how proud she is of her students and staff and the high quality of work they do. She is also grateful for the funding she receives for her research, and she tries to instill the same recognition in her students and staff.

“I like to remind myself very frequently that the funding I receive is not really mine; it’s the taxpayers’,” Hahn says. “I’m not trying to be preachy; it’s the truth. For instance, although salary is a common complaint of graduate students, their tuition and stipend are paid for by government grants funded by taxpayers. They are being paid to get a degree—what a wonderful privilege.”

“What I love most about my work are the interactions I have with my students and just becoming a better person and a better scientist because of them and watching them become better scientists and, hopefully, also better people,” she says. “It’s a real blessing.”