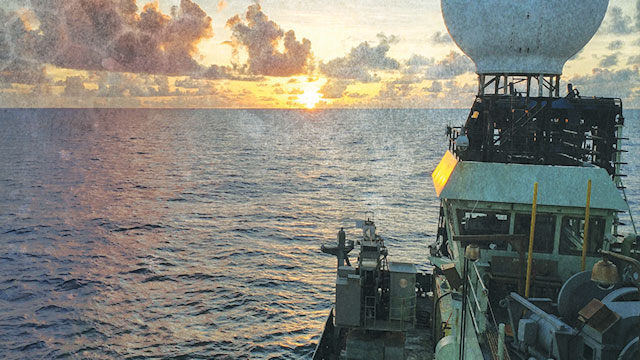 The sun sets over the Atlantic Ocean as Bigelow Laboratory researchers aboard the R/V Atlantis study microbial life at the Mid- Atlantic Ridge.Credit: Rose Jones

Scientist Deborah Bronk has traveled to some of the most extreme places on the planet, studying the world’s oceans and the microorganisms that inhabit them. But in 2016, an invitation to present a research seminar in East Boothbay, Maine, at the Bigelow Laboratory for Ocean Sciences left a lasting impression on her. “I was blown away because it doesn’t look like other oceanographic labs. This is what a lab of the future looks like in ocean science,” says Bronk, who is now in her second year as president, CEO, and senior research scientist of the state-of-the-art facility.

Although the physical design of the Bigelow Lab was attractive, there were many other aspects that intrigued Bronk. “We put people in relatively close quarters by design, and we maximize interactions with the scientists and each other. Also, we’re independent, which means we can be very nimble. I can make decisions with scientists here and we can do it the next day,” she explains. The independence also allows the lab staff to focus solely on their research. The lab has core facilities that numerous scientists share, which makes operations more efficient. The Bigelow Laboratory for Ocean Sciences is named in honor of Henry Bryant Bigelow, a pioneer of modern oceanography who stressed the interdependence of the biological, chemical, and physical sciences in ocean research. The lab was founded in 1974 and is primarily funded by federal and state grants, licenses, and contracts with the private sector; it also has philanthropic support.

Unlike most oceanography labs, Bigelow focuses much of its efforts on microbe research, including microscopic plants and bacteria and the organisms that eat these things. They also do work with kelp, seaweed, and corals—things at the very base of the ocean food web. “That’s what we’re known for and that’s where we have our greatest strengths,” says Bronk. According to Bronk, it is important to focus on this field of research because “everything starts with the microbes.”

“Half of the oxygen we breathe comes from the oceans. If we’re going to support the growth and human population that’s expected, it’s going to have to continue to come from the oceans. It’s the start of everything,” Bronk says. Bigelow scientists conduct research in every ocean around the world. In 2018, scientists traveled to the North Pole, the Arctic, Alaska, the Gulf of Mexico, and the coast of Norway, among other locations. The lab is made up of about 80 staff members, including 18 senior research scientists, about 20 postdocs, and 25 research technicians. Many of the researchers will spend weeks or months at a time out in the field on expeditions. For example, senior researcher Paty Matrai went on three expeditions in 2018. One trip involved a two-month ship excursion near the North Pole to better understand how algae in the ocean affects how clouds are formed. The process is a major control for the planet’s climate, so the findings could provide invaluable insight into our changing climate. Another senior researcher, Beth Orcutt, is studying microbes that live on the ocean floor and in other extreme environments, while senior researcher Nichole Price undertook a project over the summer of 2018 that analyzed the effects of kelp growth on mussels. Carbon dioxide emissions dissolve in the ocean, altering the pH of the water and making it more acidic, which is a problem for organisms like mussels. High acidity can make their shells weaker and stunt their growth. Price conducted experiments by raising mussels in a kelp farm, as kelp grow rapidly and suck carbon out of the water, ultimately decreasing the acidity level. She found that the mussels grew better, created more meat, and had stronger shells. This concept of phytoremediation could benefit marine life and balance out the chemistry of the world’s oceans.

Bigelow co-founder and senior research scientist Clarice Yentsch pioneered the use of a flow cytometer— which is typically used in the medical profession—in ocean science. The instrument can study one cell at a time and analyzes 20,000-100,000 cells per second. Now, the Bigelow facility is home to the Single Cell Genomics Center, which uses flow cytometers to sort out individual cells. Researchers then analyze the DNA in those cells for their genetic potential. “There really isn’t anything else like that in ocean science in the world,” says Bronk. Another unique element of the Bigelow Lab is the National Center for Microalgae and Microbiota, which is known for having one of the largest collections of phytoplankton in the world.

The lab kicked off 2019 by publishing a new study in the Journal of Geophysical Research: Oceans about phytoplankton under the Greenland Sea’s ice. The Bigelow researchers revealed the annual phytoplankton cycle and found that phytoplankton produce all the energy that fuels ocean ecosystems. Half of this energy is produced under the sea ice in late winter and early spring and the other half is created at the edge of the ice in the spring. The team was able to make these discoveries by developing new technology and oceanographic instruments called Argo floats. These floats bobbed around the Greenland Sea ice continuously for four years, providing invaluable and previously unknown data about the region. The floats were able to access the under-ice ecosystem that is typically concealed from satellites and research vessels. “We now have an incredible observational data set and are able to see the full picture of the phytoplankton community through the seasons,” said Matrai in a January press release on the findings.

As is the case with many research teams, the main obstacle for Bronk and the Bigelow Lab is funding. At the time of this writing, the federal government stopped supporting the National Center for Microalgae and Microbiota, which Bronk refers to as “a national treasure.” As a result, the team needed to find alternative ways to keep the center intact and running. “There are lots of concerns about declining federal funding right now to study our own planet,” says Bronk. Also at the time of this writing, the U.S. government shutdown was entering its fourth week and the Bigelow staff was unable to access millions of dollars’ worth of grant funds to support the 80 members of the facility. “We’re relying more and more on philanthropy. The financial challenges of keeping a lab at the cutting edge are significant,” Bronk adds.

Historically, the Bigelow Lab has been purely researchfocused. But as part of a strategic plan for upcoming years, Bronk and her team are looking to increase the lab’s education programs and continue its growing relationship with Colby College (Waterville, Maine). Bronk also hopes to establish more partnerships with industry, particularly in the aquaculture field. Aquaculture refers to the farming of fish, mollusks, aquatic plants, algae, and other marine organisms as a sustainable solution to the food and nutrition needs of a growing population. As Bronk explains, the Bigelow team wants to better understand what questions and issues professionals in the aquaculture industry are experiencing, and how Bigelow can incorporate its research to help solve these problems. “We’re trying to make this jump of not only understanding how a system works, but how we can make the system better and solve problems,” says Bronk. This will be a bigger part of the lab’s approach going forward.