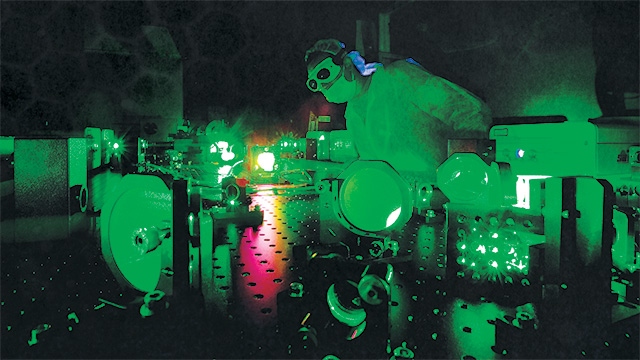 While scientists in fiction often use lasers for evil, researchers in the real world use them to help humankind. The University of Nebraska-Lincoln’s Extreme Light Laboratory (ELL) is home to one particularly unique laser that could benefit us in many ways.

Diocles, named after the inventor of the parabolic reflector, recently set the record for the world’s brightest laser. In a study published on June 26, 2017, in Nature Photonics (https://goo.gl/PuWPN4), principal scientist and ELL director Donald Umstadter and his team achieved that record to gain new insights into how extremely bright light scatters. The properties of the X-rays created in that experiment could have important applications in a variety of areas, including cancer diagnostics and materials research.

“It really changes the physics of how we see things in very extreme light conditions,” Umstadter says.

Other key research at the lab is focused on miniaturizing synchrotron X-ray light sources, which produce much more powerful and higher-quality X-rays than the machines found in hospitals. However, in order to produce those high-quality X-rays, these synchrotrons must be massive—essentially the size of an entire building. Funded by the National Science Foundation, Umstadter and his team are looking to improve a new generation of laser-driven electron accelerators to shrink those light sources down to a more manageable size. He explains that the acceleration gradient of such laser-driven accelerators is around 100,000 times greater than that of a conventional accelerator, meaning they reach a given electron energy in a distance that’s 10,000 times shorter.

“That allows us to shrink these huge machines that exist around the world to a size that could fit inside a hospital or university lab, and we think, potentially, could fit in a truck that could be moved around,” he says. That means higher-quality X-rays could become attainable for academic research and diagnostic applications.

“The ability to see much smaller features will enable people to detect cancer at an earlier stage and, potentially, to treat cancer,” says Umstadter, adding that to take an X-ray, their light source also deposits a dose of X-rays that’s 10 times smaller than conventional machines.

The ELL itself, including office and lab space, is around 4,000 square feet, with 12 people in Umstadter’s research group made up of a combination of graduate and undergraduate students, technicians, postdocs, and research scientists. Other faculty besides Umstadter also use the lab’s lasers for their own research. Managing those lab members is an extremely important part of the ELL’s success, Umstadter says, though he admits it can be a challenge as management is not typically part of physicists’ or professors’ education.

“For the type of research we do, it turns out management is critical to success because we work as a team and it takes a lot of coordination and dedication,” he explains. “It’s an unusual enterprise and it’s not for everybody. It takes unusual people to put in that much effort toward something that doesn’t give you instant gratification.”

Working with such powerful lasers also involves some unique precautions. Eye protection, as with other laser systems, is obviously a must, but researchers must also wear hairnets, breathing masks, and other protective clothing to protect the lasers themselves.

“We’re doing experiments at power levels that are so high that they will vaporize the dust that gets on any of the optical elements, like the lenses and the mirrors, and that can damage them over the long term,” Umstadter explains. While the lab isn’t a full clean room, it’s kept clean enough to prevent such dust damage, and researchers can also precisely control the temperature of its rooms. Chilled water cooling systems for some of the lasers’ optical elements keeps them at a steady temperature, and vibration dampening systems in the optical tables ensure their laser systems stay properly aligned even when large trucks or trains are passing nearby.

A challenge in terms of the basic science is that laser research is something of a “hot topic” in physics today, meaning there’s a lot of competition, Umstadter says. “There are a lot of competitors out there who are trying to make the discovery before we do, so the big challenge is to be organized well enough that you can execute fast and be the first to get the results and get them published,” he explains.

He adds the challenge with the applied research they do is to bring ideas from the lab to the “real world” and get them to the point where they are mature enough to have a real impact:

“It’s particularly challenging with these more-advanced sources because they’re relatively new and there [are] tens of thousands of these conventional sources already in use. There is a lot of . . . disruption associated with having something different.”

To counter those research challenges, Umstadter and his team are trying to stay in the lead in developing the technology, as well as protecting their intellectual property by patenting their ideas through the university. They’re also getting government grants to help develop the technology to a point where the private sector would be interested in investing in it.

However, handling new challenges every day makes the work exciting, Umstadter says, adding that the creative process involved is what he enjoys most about working in the lab. “There’s a lot of creativity involved that probably many people don’t appreciate that goes into taking ideas from just a thought to something real.”

For the future, Umstadter says the ELL is continuing to focus on staying ahead of the pack in high-intensity laser research. At the same time, they’d like to expand the facility to allow scientists from the U.S. and around the world to do their research at the ELL.

“We would like to stay competitive with other countries who are now building labs very similar to the one we built,” he says. “You might say our model is being copied by other labs around the world and we want to stay in the game.”