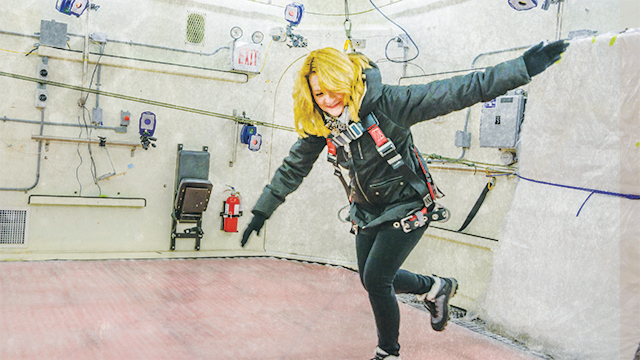 A research participant slipping in WinterLab.Photo courtesy of the Toronto Rehabilitation Institute

For anyone who’s ever slipped and fallen on an icy sidewalk in winter, Toronto’s WinterLab is a facility they’re likely to appreciate. The lab, one of eight simulators in the larger Challenging Environment Assessment Laboratory at the Toronto Rehabilitation Institute in Canada, is focused on improving mobility in winter conditions.

“We’re well aware of the number of people, particularly older people, who fall over and break their hips. Some of them go on to die, and most of them never get their independent mobility back,” says Dr. Geoff Fernie, research director at the Toronto Rehabilitation Institute, which is part of the University Health Network. “We’re talking about over 20,000 people every year going to emergency departments in Ontario alone, so it’s a big problem.”

That’s where WinterLab comes in. Consisting of a specially insulated six-meter by six-meter room, the lab has two different ceilings that can be swapped in and out, both include a safety harness but one features a passive track and the other a robotic track, allowing study participants to test winter footwear and walking aids without hurting themselves. The room can simulate 30 km/hour winds and has glycol delivered into coils in the floor so researchers can flood it to create ice and control its temperature to within half a degree. Together with precise control of the air temperature, this allows them to simulate either dry cold-air ice or ice that’s melting.

“The performance of boots and tires is very different on wet, melting surfaces compared to dry surfaces,” Dr. Fernie explains. Snow, on the other hand, is made by a machine in a separate area and then shoveled into the room. “We tried blowing [the snow into the lab], but we would end up sometimes with a big slush pile because it would be too watery since we didn’t have the distance and the cold temperatures [we needed],” he says.

The entire room can also be picked up and moved by a crane, then placed on either a flat surface or a “tipper” that can be tilted to angles up to 15 degrees to simulate slopes. It can also be set upon a hydraulic base so researchers can move the lab suddenly or produce steeper angles up to 23 degrees. A wire grid on the room’s floor keeps the ice from breaking to pieces while WinterLab is being tossed about.

Camera systems, combined with reflective markers on study participants, allow researchers to do 3-D measurements and track participants within less than a millimeter in space. This allows researchers to produce skeletal images and calculate where the body joints are and how they’re moving. They can also precisely measure slippage.

Recent WinterLab research that’s gained plenty of buzz has involved developing a rating system for winter boots. The tipper was integral to that work, with research participants walking up and down the room while connected to the safety harness as researchers raised the angle of WinterLab one degree at a time until the participant slipped with both feet. They then checked to make sure participants could handle the angle just below that.

“We then know the angle that they can manage, and that’s what we call the maximum achievable angle (MAA) for that shoe on that surface for that person,” Dr. Fernie says.

Determining that angle allowed researchers to develop a “Snowflake Scale” that rates winter boots on how well they perform in slippery conditions (www.ratemytreads.com). Boots that perform best get three out of three snowflakes, meaning they can handle slopes greater than 15 degrees. However, the best performing boots in the study got only one snowflake out of three, handling an angle of at least seven degrees before people slipped. Two-snowflake boots can achieve angles greater than 11 degrees.

“The ultimate purpose is that we want to reduce falls,” says Dr. Fernie of the scale, adding that it allows consumers to make more informed decisions about winter footwear. The researchers also hope to increase competition in the footwear industry, motivating companies to design boots that don’t just look good but also perform well in winter, Dr. Fernie says.

Aside from winter boots, the lab has also tested electric mobility scooters, which aren’t currently designed for winter or rainy conditions, to study their traction in winter.

In addition, they’ve tested a breathing mask that helps warm the cold winter air, the effectiveness of wearing hats and scarves to keep people’s blood pressure down in the cold, and an aid called the Sleeve Gripper to help the elderly in putting on their winter coats.

Winter boots, however, remain their focus for the near future. This year they hope to study how winter boots wear down with use. “We’re worried that some of the more high-tech materials that give you more traction might wear out quickly, making it necessary to buy new boots every year,” Dr. Fernie says. To measure that wear, they plan to pay some of their students to go for walks during their lunchtimes, testing various footwear. They also hope to extend their research in traction on ice into traction on snow, but there’s a challenge.

“It’s very difficult to make the snow reproducible, because as soon as you walk on it, it compacts, so it makes it really difficult for us to do enough repeat testing,” Dr. Fernie explains. “We have to keep replacing snow all the time, which makes it extremely time-consuming. But we do know that snow on top of ice is a particularly hazardous condition, so we need to solve that problem.”

They also want to ensure the results from their studies in the lab translate to the real world. To do that, they’re developing an accelerometer-based device that can be attached to the footwear being tested. The device will determine when a slip occurs so they can measure slips in the real world. WinterLab researchers plan to have people wearing the best lab-performing footwear and worst lab-performing footwear and check how well the real-world tests correlate with those lab results.

“We’re always trying to make sure that what we’re doing in the laboratory is validated thoroughly with what happens in the real world,” Dr. Fernie says. “Of course, the real world is very variable, and we can’t do research there every day because it changes all the time; whereas in our laboratory, we have winter that is very closely controlled 365 days a year.”