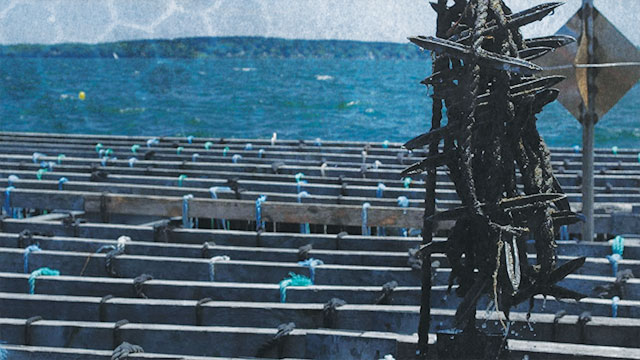 Rope used to grow blue mussels (Mytilis edulis). This rope is dropped vertically in the water column to collect and grow mussels.

Last summer, it became clear to Matthew Moretti that his mussel farm could use more scientific expertise when a percentage of his mussels died on the line—a so-called mortality event.

“We had a lot of theories [about the cause], but we didn’t really know exactly what happened,” says Moretti, who owns Bangs Island Mussels with his father, Gary, through their company, Wild Ocean Aquaculture, LLC (Portland, ME). “Our science component was lagging behind. We knew that we could grow mussels and kelp well, but we didn’t have a lot of the technical knowledge that we should have had to be able to really monitor what was going on.”

So he reached out to University of New England (UNE) assistant research scientist Adam St. Gelais and assistant professor Carrie Byron. After some preliminary discussions and tests on a sample of Moretti’s blue mussels, St. Gelais asked if he’d be interested in doing a larger study to determine how factors in the environment are affecting his mussels. Moretti jumped at the chance, helping write a grant proposal for the Northeast Sustainable Agriculture Research and Education program, which will fund St. Gelais’s histology part of the project for the next two years. In addition, an Established Program to Stimulate Competitive Research grant allowed them to set up Moretti’s farm as a lab this summer as part of the Sustainable Ecological Aquaculture Network (SEANET). That funding allowed the team to purchase probes, sensors, data loggers, and handheld instruments to monitor the various rafts where Moretti grows his mussels on two sites in Casco Bay, Maine.

While there are other such research-intensive farms in the SEANET project, Byron says that the 3.66-acre Bangs Island Mussels farm, in her opinion, is “the most equipped with scientific instruments” and “more like a lab than any of the others.”

Both Moretti and the researchers see the partnership as a great opportunity to learn more about how aquaculture impacts ocean ecology.

“We know that what we do is good for the environment,” Moretti says. “Shellfish farming and seaweed farming are good for our local ecosystem, but this will give us a really cool view into more specific ways that we impact our surrounding waters.”

Byron’s group is interested in how a farm in the coastal environment influences food web dynamics—how energy is moving through the food web and predator-prey relationships, along with how the food web promotes the production of more mussels.

Specifically, she’s looking at how mussels’ fatty acid content—important in humans’ diet because our bodies can’t make fatty acids on their own—is affected by the mussels’ own diets, the amount of stress they’re under, and other environmental factors.

“We’re looking very closely at what the mussels themselves are eating or what’s available for them to eat in the water,” Byron says, adding that they are also exploring the mussels’ tissue quality and growth rates.

The sensors and other equipment deployed on the ropes suspended from the 40 × 40–foot rafts where Moretti grows his mussels allow the group to record real-time temperature, salinity, dissolved oxygen, and some indicators that will allow them to understand the water’s pH level. That information will ensure that, in the future, they’ll know exactly which factors may be affecting the mussels’ health, other creatures that live on the farm, and their environment. While the partnership is still new and they’ve only just started gathering data, it has a lot of potential benefits.

“This information will definitely help us understand what’s happening on our sites, but it will also help us plan for the future better,” Moretti says. “If we’re seeing changing characteristics in the water, we can perhaps develop some strategies to mitigate those changes or overcome those changes.” The data will also help them identify new sites to expand the farm to in the future.

For St. Gelais, Moretti’s farm is the perfect setup for different scales of experiments. Because the rafts are all identical and there are two different sites, one close to shore and one farther away, “the farm itself is sort of already set up in replicate, which makes it a very interesting and fun place to design experiments around,” he says. That layout allows them to ask about how the health and condition of the mussels vary, both from raft to raft as well as between the two different sites.

Twice a month, the farm’s crew helps gather a random sample of 15 mussels from each site, which are brought back to UNE. Five mussels are prepared for histology, five for fatty-acid analysis, and five for stable isotope testing. In addition, the researchers go out in their own vessel to Moretti’s near-shore site and sample 15 mussels from each of the rafts to better understand the differences between those mussels.

As far as challenges, Moretti says there haven’t been any on his side because of the extensive planning and meetings between the two groups, but there are a few issues the researchers have run into.

“Managing a lab in a building is hard enough, and then trying to manage one that’s floating in the ocean that you don’t have total control over is always difficult,” St. Gelais says, adding that access to the site can sometimes be a challenge. “Everything looks perfect on paper when you sketch out how an experiment is going to go. When you plop it in the ocean on a bunch of mussel rafts on a working farm…those plans tend to go out the window.”

Being adaptable and flexible in their research plan has helped them tackle that challenge, ensuring they’re answering questions useful to both the researchers and farmers while also staying out of the way of daily farm operations.

“I think one of the biggest challenges in this relationship is timeline,” Byron adds. “In industry you have to move fast and make quick decisions, [but] science takes some time.”

She explains that while Moretti may now have access to what the temperature, salinity, or dissolved oxygen is in the water at any particular moment, they likely won’t understand exactly how those factors are affecting the mussels until they’ve done a more in-depth analysis. However, she adds that Moretti has been very patient with the slower process of science. He himself has a master of science degree, and of the farm’s three fulltime staff members and around seven part-timers, about four also have science backgrounds. Some of the farm’s part-timers are actually UNE students.

Overall, the partnership has been a great opportunity for the roughly seven students involved to gain handson experience. In St. Gelais’s histology lab, the analyses were powered by two students who started off as histology “newbies” and have now gained enough experience that they’re able to process samples much faster.

Byron says that not only are students learning how to do solid science, but they’re also getting exposure to industry and learning how to be sensitive to industry needs. “They’re learning that balance of how to be sensitive to industry and the needs and motivations of industry, which can be very different from academia,” she says, adding that students have also gained boating experience. That part of doing research on a mussel farm—being out on the water—is what she enjoys most.

“It’s not a sterile environment like some labs are inside,” she says. “What’s great about being out on the farm is that you’re part of it—you’re outside, you’re experiencing it, it’s alive, [and] there’s wildlife all around you.”

For St. Gelais, having a positive impact on Maine’s economy through UNE’s research is one of the biggest benefits of the project. Everyone involved hopes the partnership continues well into the future.

“As our company matures, we’re becoming more scientific over time, and this [partnership] is one of those big steps,” Moretti says. “As the industry in the United States matures more and more, we’ll need more people with science backgrounds to keep our aquaculture industry moving forward.”

Even the mortality event that led to the partnership may have a future benefit. Byron explains that when mussels are stressed, they release all of their gametes before dying.

“That’s typical of bivalve shellfish. If they don’t think they’re going to make it because they’re so stressed out, they’re going to throw all of their gametes in the water and hope for the best for the next generation and then conk out,” she says. “We’ve seen declines in wild blue mussels in this area in the past decade and, again, we don’t really know what’s causing these declines. Having spawning events originating from farms really puts hope, if you will, back in the water that some of those gametes might find a happy place to settle and lead to a next generation of wild mussels.”