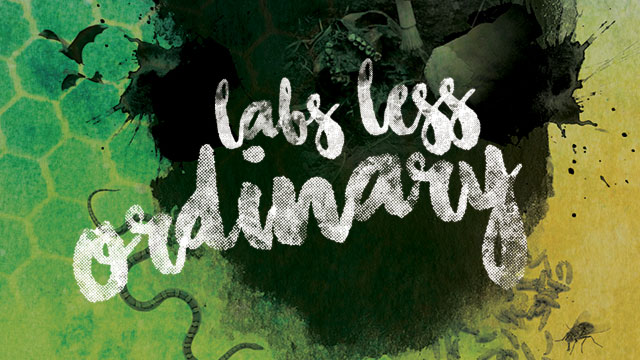 When we think of the typical laboratory environment, we often conjure up images of pristine clean rooms and benches crowded with bubbling beakers—a place where technicians clad in clean, white lab coats occasionally shout, “Eureka!”

While a great number of labs may bear some resemblance to this idea, for others nothing could be farther from the truth. For many scientists, research is firmly grounded in solving practical problems and often lacks any resemblance to the “glamorous” life of the scientist portrayed in mainstream media.

This month we are dispelling the ivory tower myth of scientists by featuring five researchers who aren’t afraid to roll up their sleeves and get their hands dirty for the sake of science.

While many researchers are well accustomed to dealing with animals in the lab, few are confronted with the business end of a rhinoceros on a daily basis. For Dr. Terri Roth, vice president of conservation and science and director of the Center for Conservation and Research of Endangered Wildlife (CREW) at the Cincinnati Zoo & Botanical Garden (Cincinnati, OH), managing the reproductive health of severely threatened rhino species has become a passion. According to Dr. Roth, several types of rhino have come under considerable threat, with many species on the verge of extinction, including the Sumatran rhino, which currently has a population of around 100 individuals, and the northern white rhino, which has only four living representatives. 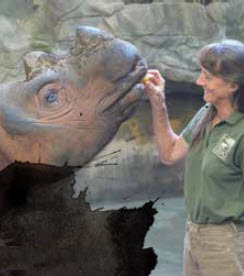 Terri Roth with Sumatran rhino “Harapan,” the last Sumatran rhino in the Western Hemisphere.Photo credit: Michelle Curley, Cincinnati ZooHistorically, rhinos were aggressively hunted for their horns, which were touted for their specious medicinal properties— properties since proven to be nonexistent. Currently, the market for rhino horn in Asian countries (particularly Vietnam) is driven by cultural demand, where rhino tea is commonly given as a prestigious gift or consumed as a status symbol to display someone’s success or wealth.

While conservation efforts are clearly important in maintaining many species in the wild, for many rhino species scientific intervention is required. “Rhinos are typically a solitary species and are not breeding in the wild,” says Roth, “and rhinos that don’t breed commonly develop reproductive pathologies rendering them infertile.” At this point, with many wild females sterile and their habitats becoming increasingly fragmented, recovering many rhino species will require intensive IVF work. Unfortunately, according to Roth, “the science is just not there yet.” She states that although there has been a single successfully produced rhino embryo, it did not survive.

For now, sperm banking has become a priority at CREW, where they operate CryoBioBank, a genome resource bank where animal samples including sperm, oocytes, and embryos are stored in tanks of liquid nitrogen at -196°C for future use. Through sperm banking and maintaining cell lines at various zoos worldwide, it is hoped that these species may be resurrected in the future as reproductive technologies progress.

When people think of flies in the lab, they most likely consider the humble fruit fly Drosophila—the standard model for studying genetic heredity for over a century. However, for Dr. Cameron Richards, head of entomology at AgriProtein Technologies (Stellenbosch, South Africa), raising flies has a much more utilitarian purpose.

Dr. Cameron Richards with a handful of maggots.Image Credit: AgriProteinDr. Richards is responsible for the care and maintenance of the world’s largest commercial fly farm, which at full operation will house 8.5 billion flies in its 8,000-square-meter facility. The facility is designed to convert organic waste, including waste food, animal manure, and abattoir waste, into tons of wriggling maggots. These maggots can then be used to create tons of protein- rich animal feeds, oils, and high-nitrogen fertilizer.

At full capacity, the facility can convert 100 tons of waste per day to 25 tons of nutrient-rich fertilizer (Mag- Soil) and three and a half tons of MagMeal—a natural and sustainable feed for chickens and farmed fish. In addition, the process extracts three tons of MagOil daily.

According to Richards, MagMeal has a desirable protein composition of between 50 percent and 60 percent, with roughly 34 percent fat content. Further, the protein levels can be easily increased up to 75 percent simply by extracting more oil from the processed larvae.

While many lab workers are confronted with workplace risks, and many work with hazardous substances, few have a lab quite like Carl Barden. As the director of Medtoxin Venom Laboratories (DeLand, FL), Barden operates one of the very few venom labs in the world, housing roughly 1,000 specimens that represent roughly 40 species of venomous snakes. 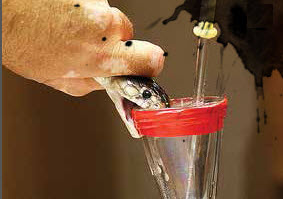 Venom extraction from king cobra.Image courtesy of MedtoxinRunning one of six such labs operating in the United States, Barden is kept busy performing daily venom extractions from snakes for the lab’s current 25 venom lines. Barden and his team of highly trained technicians perform the venom extractions by hand, with most specimens being handled on 14-day extraction cycles.

The venom is collected under strict laboratory conditions to ensure that the samples remain sterile. Collected samples are then centrifuged cold, frozen, and lyophilized within six hours of extraction. “Lyophilized samples are very stable,” says Barden. “Samples can easily be stored for long periods or shipped around the world without risk of sample degradation.”

Venom collected at Medtoxin is shipped globally and used in the production of antivenom treatments as well as in a host of research and pharmaceutical applications. Barden has a long-term relationship with reptiles and has built his collection over time. As a dedicated conservationist, he had developed a collection largely from captive-born snakes and snakes obtained through nuisance removal and confiscation. In addition, Barden is the director of the Reptile Discovery Center, an educational facility that allows visitors a rare view into the process of venom extraction.

More information about Medtoxin and the Reptile Discovery Center is available at www.reptilediscoverycenter.com.

Fieldwork can be a welcome reprieve from the lab for many researchers—although when it’s an actual field that happens to contain over 70 decomposing human corpses, some may have second thoughts. However, for Dr. Daniel Wescott, director of the Forensic Anthropology Research Facility (FARF) at Texas State University, studying human decomposition is part of the job.

Founded in 2008, the 26-acre research facility informally known as the “body farm” is home to roughly 70 human corpses obtained through the center’s body donationprogram. As the largest facility of its kind, the center attracts a wide variety of researchers, including microbiologists, entomologists, and soil scientists, among others. 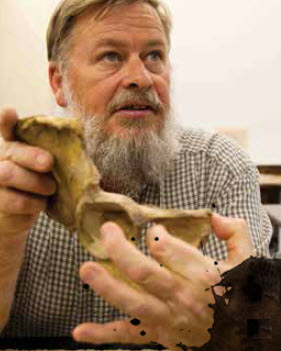 Dr. Daniel Wescott examining skeletal remains.Image courtesy of the Forensic Anthropology Center at Texas State University.In the field, bodies are placed in specific locations both above and below ground, while others are wrapped in various materials to mimic conditions of homicide victims. Many bodies are protected by cages to discourage scavenging by local wildlife, while others remain in the open as part of an ongoing study of vulture scavenging behaviors, according to Dr. Wescott.

While the preparation of the corpses may be decidedly simple, relying on nature to decompose the bodies over periods of six months to a year, the analyses performed at the FARF are anything but low tech. Presently the center is engaged in an ongoing study utilizing near infrared (NIR) imaging equipment mounted on drones to detect corpses both above and below ground. According to Wescott, “The search for clandestine bodies can be very difficult and time-consuming.” Drone-mounted NIR equipment allows the detection of features not visible to the naked eye, and it can often spot the location of a burial up to two years after the body has been removed.

The center’s skeletal analysis lab is well appointed with advanced instruments, including a micro-CT scanner, a white light laser scanner, and a 3-D printer for examining skeletal variations and bone microstructure. The lab is also equipped to perform stable isotope analysis, which can yield valuable information about an individual’s geographic history.

As part of its indoor facilities, the FARF also operates a processing lab where bodies are decontaminated and soft tissues removed prior to skeletal analysis. The processing lab also works to identify unregistered immigrants involved in border-crossing fatalities so that their remains can be properly returned home. More about the Forensic Anthropology Center at Texas State is available at www.txstate.edu/anthropology/facts.

For many people, delving into a cave full of thousands of bats would be unthinkable. This is not the case for Dr. Winifred Frick, an assistant adjunct professor in ecology and evolutionary biology at UC Santa Cruz. For over 15 years, Dr. Frick has been studying bat ecology in the Gulf of Mexico and the Baja California desert. 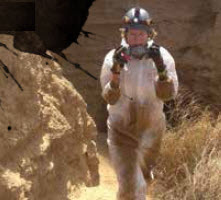 Dr. Winifred Frick exiting batcave.Presently Dr. Frick and her team are engaged in research involving white-nose syndrome in various bat populations in the northeastern United States and Canada. White-nose syndrome is an epizootic disease in hibernating bats caused by Pseudogymnoascus destructans, a cold-adapted fungus that thrives at temperatures between 4°C and 15°C. Since its emergence in 2006, the disease had has a devastating effect on North American bat species, resulting in the deaths of over 90 percent of some colonies.

While disease surveillance for white-nose syndrome has historically relied on visual surveys of the bat hibernacula, Frick employs a more technical solution. By swabbing the wings and noses of hibernating bats, Frick uses qPCR to test for P. destructans on colonies of potentially infected bats. “Testing for cryptic infections is of particular importance,” explains Dr. Frick. “qPCR can detect infection even at very low pathogen load when visible symptoms are not present.”

Currently there are no treatments for white-nose syndrome, although this winter a group led by Dr. Frick will be conducting two trials for reducing bat mortality.

Find out more about the Frick Lab at www.frick.eeb.ucsc.edu

Do you work in a lab less ordinary?

Tell us about it, and maybe you’ll be featured in an upcoming issue. Send your story to editors@labmanager.com, or share it on Facebook at www.facebook.com/labmanager.