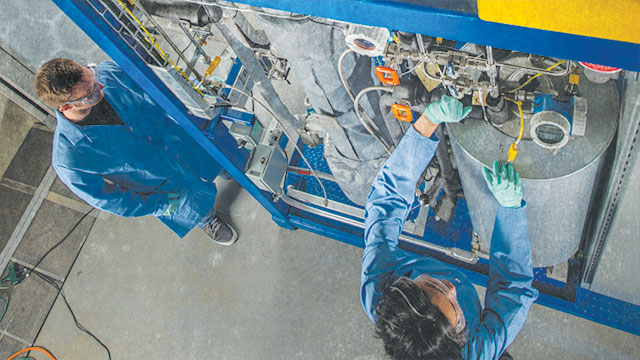 Processing sewage sludge at a wastewater treatment facility is definitely a stinky job. But what if that sludge could be more than a smelly burden? That’s the premise behind recent research at the U.S. Department of Energy’s Pacific Northwest National Laboratory (PNNL) in Richland, Washington. The lab’s work with sewage has been raising a different sort of stink among various media outlets since the lab posted a press release in November 2016 regarding its work.

About 10 staff members at the lab—which is focused on key issues in energy, the environment, and national security—have been working on turning sewage sludge into fuel by using hydrothermal liquefaction (HTL), a technology that utilizes both high heat and pressure in order to break down the sludge into simpler compounds, which are then turned into biocrude oil.

“Wastewater treatment facilities have a significant energetic and economic cost associated with dewatering and disposing of the biosolids once they’ve been treated,” explains Corinne Drennan, who is responsible for bioenergy technologies research at PNNL. However, if the HTL technology can be adapted for municipal use, the biosolids wouldn’t need to be processed or transported, thus reducing those costs.

The pathway to poop

Getting HTL to the point where it’s able to turn sewage into fuel has taken some time.

“My mentors were working on it in the late 1970s and early 1980s for woody biomass. At the time, it was really expensive to build all of the equipment, so they put it on the shelf thinking it would not be economically viable anytime soon,” Drennan says about the technology.

After some success with turning algae into jet and diesel fuels, they began considering wet waste, including brewery waste; pomace, which includes the grape skins and seeds left over from winemaking; potato waste; beet tailings; and industrial sludge. “Then it begged the question, ‘What would happen if we played with poo?’” Drennan says. “So we had to do that.”

The PNNL team teamed up with Metro Vancouver—a partnership of 21 municipalities, one Electoral Area and one Treaty First Nation in Canada—which supplied PNNL with the biosludge for their research. “The collaboration took off from there,” Drennan says, adding that the Water Environment & Reuse Foundation is also involved in the project and it licensed their hydrothermal liquefaction technology to a Utah-based company called Genifuel.

“When we saw the fuel come out, it looked really, really incredible,” Drennan says. “It had the same kind of features and molecules in it that you get from the best algae you could ever buy. That means there are lots of lipids in it.”

Before you start thinking that Canadians are eating an exceptionally high-fat diet, and that some communities’ diets create better sewage for fuel than others do, Drennan says there’s more to it than that. 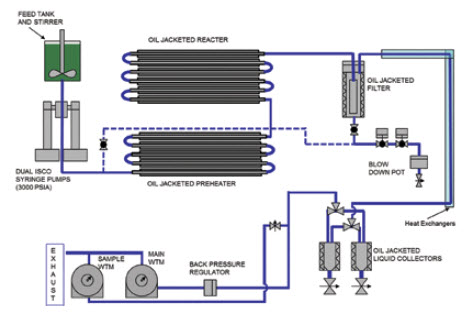 Corinne Drennan of PNNL explains the processes involved in the HTL system: “The HTL system uses high pressure and temperature to convert the sludge into biocrude. One of the largest cost drivers for any biofuel technology is yield. This means that the biofuel product cannot be ‘lost’ during separations processes. Efficient solid-liquid separations, at the high pressure and temperature conditions of the system, are a distinguishing feature of PNNL’s HTL technology. Another separation process that occurs is biocrude-water, or liquid-liquid separation. This is performed at near-ambient conditions. Separations are challenging, and we’re always working to perfect them.”Diagram courtesy of Corinne Drennan.“The wastewater treatment facilities actually have quite a bit of processing that goes on,” she says. “There’s flocculation, settling, and anaerobic digestion—so what came to our HTL reactor were all of those things.” She explains that along with biosolids come the microbial bodies responsible for anaerobic digestion, which have lipids in their membranes. “I don’t think it would matter what the people eat—if it can get through anaerobic digestion to some extent, then you have a very high-quality feedstock that we would have never guessed.” Drennan adds that wastewater facilities tend to skim the fats, oils, and greases from their wastes, and ideally, the PNNL team would like them to leave those in for a potentially better feedstock.

To help the team better understand the quality of the fuel, PNNL also has a partnership with New Mexico State University where students take the hydrotreated biocrude and subject it to engine-testing and analyses that the national lab doesn’t do on-site.

While turning sewage into fuel isn’t a new concept and other scientists are already using hydrothermal liquefaction technology for a variety of applications, Drennan says her team stands out. “I think our team is world-class [because] they practice it [hydrothermal liquefaction] in the most effective and efficient way that I have seen,” she says.

Despite the strides that have been made with the technology, there are still challenges for the team to solve, which mostly involve improving yields and getting material to flow through the reactor at a good velocity, Drennan says. The main obstacle to improved yields is separation, she adds.

The work continues to move forward though, with Genifuel and Metro Vancouver working together to build a demo plant on Annacis Island in British Columbia, focusing on the design and equipment fabrication this year. The plant is expected to start up in 2018 and be the first wastewater treatment facility in North America to use hydrothermal liquefaction. Drennan adds that a monetary award was recently given to the Water Environment & Reuse Foundation, Genifuel, and PNNL to build a demo plant in Contra Costa, near Oakland, California, at their wastewater treatment facility. As with the Canadian demo plant, the first year of the Contra Costa project will involve planning, costing, and designing before going through a stage gate review with the Department of Energy to get the go-ahead for implementation, Drennan says.

If those demo plants are successful, Drennan says she’d like to see a transportable system implemented, which currently exists at PNNL.

“I’d like to see that deployed at military bases and see if we can help them with some of their wastewater and organic waste management and just help people get familiar with the technology,” she says. “Hopefully, that familiarity will lead people to want to adopt it and invest in it so that we can see it in municipalities all over.”