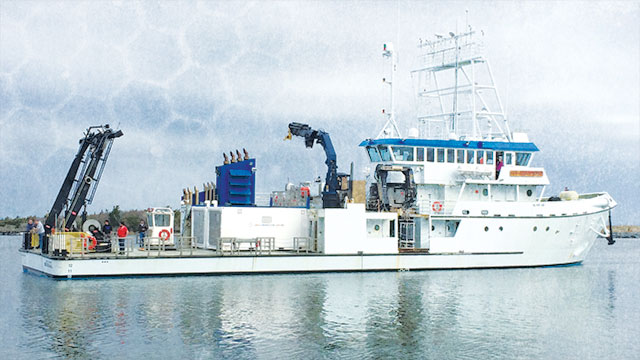 In sports, small players who “play big,” competing with the strength and toughness of larger athletes, commonly become fan favorites. In the research vessel world, the University of Delaware’s R/V Hugh R. Sharp is like that small player who plays big.

“For the size of ship we have, we’re like a bigger vessel with the deck space and lab capabilities that we have. We also have a dynamic positioning (DP) system that allows the ship to hold station over a precise location, and a fiber optic tow cable that can be used for high-definition video cameras,” says Jon Swallow, director of marine operations in the School of Marine Science and Policy at UD. “A lot of ships don’t have that suite of capabilities.”

Part of the University-National Oceanographic Laboratory System (UNOLS) fleet of 18 research vessels, the 146-foot Hugh R. Sharp was built in 2005, operating for the first time in 2006. Now heading into its 13th season, the ship supports projects funded by various agencies and academic institutions, including the National Science Foundation (NSF), U.S. Navy Office of Naval Research, the National Oceanic and Atmospheric Administration (NOAA), and the United States Geological Survey (USGS). “We have a lot of repeat users due to the capability of the ship and the ‘can-do’ work ethic of the crew,” Swallow explains. “The ship is designed to support a wide variety of science missions.”

At the time of writing, the crew was busy doing winter maintenance on the ship to get it ready for its first NSFfunded project of the year, testing a new piece of equipment for sampling plankton at depth. After that, they’re doing a large acoustics project for the Office of Naval Research and then they’ll do the NOAA Northeast Fisheries scallop survey, a month-and-a-half long project they do each year, Swallow says. He adds that, typically, they do work along the Atlantic Coast and in Delaware and Chesapeake Bays, but have gone as far as Bermuda and the Gulf of Mexico.

As far as the ship’s unique capabilities, in addition to the DP system, which was recently upgraded, and the fiber optic tow cable, they also have a deployable science keel that lowers sensors one to two meters below the keel of the ship. “This puts the sensors in water free from interference from bubbles sweeping down the hull,” Swallow says, adding the ship has several design elements to reduce noise and vibration from machinery, which is important for sonar and other acoustics-based research.

Like many newer research vessels, the Hugh R. Sharp has azimuth drive propulsion. Rather than a propeller at the end of a long shaft, the two propellers of the Hugh R. Sharp are contained in pods that can rotate 360 degrees, allowing for more precise positioning. The DP system also models the environment to add to that precision.

“[The DP system] will measure the wind, currents, and wave impacts on the ship—all the forces that are making the ship move—and if you want the ship to point in a certain direction, or stay exactly over a certain piece of real estate, you can punch [the desired location] in, and as long as the waves aren’t too rough, the computer will drive the ship and it will hold that position and orientation,” Swallow explains. “That’s important for some of the precise positioning science that we do with instruments on the bottom, or taking core samples.”

For laboratory space, the ship has 340 square feet of dry lab space and 260 square feet of wet lab space that can be configured in whatever way researchers need, accommodating up to 14 scientists and their gear. That space can be expanded using portable lab vans, essentially shipping containers set up as different types of labs, including a general-purpose van, cold van, and radioisotope van. The deck of the Hugh R. Sharp can fit two such vans.

“If you’re a scientist who needs more deck space, we just don’t carry [the vans] and they get more deck space,” Swallow says. “It makes the ship as capable as a bigger vessel.”

While the ship has its own set of scientific equipment, this can be swapped out for anything else a researcher could want and researchers typically bring a truckload of their own equipment for projects, he adds.

As you’d expect, doing lab research at sea comes with a unique set of challenges.

“The lab always moves—up, down, and it rolls,” Swallow says. “That’s always hard if you’re carrying gear. Just the environment, the saltwater, and the ship moving around are tough on equipment and people.”

He adds that making the best use of the small space they have, as well as deploying equipment in the ocean are other challenges they face.

“It’s always dangerous putting things in the water, because it’s moving around,” he says. “People have to be very skilled because we do different types of science all the time, so we have to be ready for whatever a new customer wants to do, which makes it fun.”

The weather can also disrupt a research project. “Going to sea is expensive and the scientist will get a slot of maybe eight to 14 days, and when they go out, if the weather’s really bad, or something breaks, they may not get another chance,” Swallow explains. “It’s not like they can come back the next week, because the next week, we’ve got something else scheduled. And they may have only been funded for those few days.”

While Swallow now spends most of his time in an office, he says he enjoys being part of a wide variety of research projects that have a broad impact.

“It makes you feel like you’re doing something important that’s going to get information that helps solve bigger issues with people and the ocean,” he says. “A lot of people like being at sea and working near the ocean. With the crew, you feel like a family after you work and live with people [at sea].”

Going forward, Swallow says they’ll keep upgrading their older systems and will do what’s known as a midlife study on the ship through the spring and summer.

“When a ship gets to be about 15 to 20 years old, you usually do major work on it, where you replace major systems and spend a lot of money,” he explains. “The first phase of that is to do a study to see what the ship needs. That includes information from people who want to use the ship, the type of science they want to do, and if there’s anything they want to change so we can better deploy sensors in the future.”

That will only help the ship continue to play big for years to come.