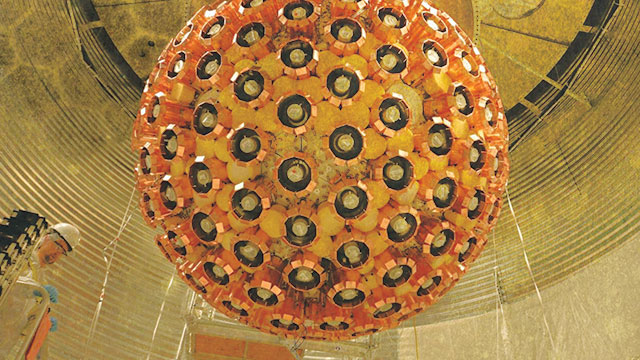 While many lab professionals deal with a morning commute to the lab, few likely have to travel two kilometers through the earth to get to work. That’s all part of a regular day at SNOLAB in Sudbury, Ontario, Canada, where lab staff start with a roughly five-minute elevator ride into the Vale Creighton Mine, then go for a kilometer-and-a-half walk to get to the SNOLAB facility, where they have to scrub as much mine dust off their boots as possible, shower, and change into cleanroom overalls before the science begins. The entire lab is a class 2000 clean room, so staff must ensure they’re as clean as possible before entering.

“We also have to have someone walk through the lab to check that the air quality is acceptable,” adds Dr. Nigel Smith, SNOLAB director. “So somebody clears the lab to make sure that there aren’t any pockets of bad air that have developed, or anything like that.”

The time staff leave the surface to the time they start working productively in the lab is about an hour, and the process needs to be completed on the way back, meaning the lab runs ten-hour shifts to ensure an eight-hour workday.

Along with the travel and cleaning requirements involved in working at SNOLAB, staff are also faced with the unique challenge of working in an active mine.

“Once you’re in the lab, it’s very difficult to recognize that you are two kilometers underground,” Dr. Smith explains. “One has to maintain the level of awareness that you are in an active mine, and that has certain implications in terms of health and safety requirements.”

SNOLAB, an expansion of the existing facilities constructed for the Sudbury Neutrino Observatory (SNO) solar neutrino experiment, currently has two main tasks: looking for interactions of dark matter in its super-sensitive detectors and carrying on the work of the original SNO experiment dealing with neutrinos.

Dr. Smith says the program is expanding beyond its original scope into several smaller projects related to genomics, in which researchers are exploring the effects of low-radiation environments on cell mutation. There’s also a project looking at data from various mines around the area to see whether the rock mass characterization can be understood using the same data manipulation techniques used in particle physics.

“We’re extending into other areas that we originally were not really thinking of,” Dr. Smith says. “One of the great things about building a facility like SNOLAB is that people will then connect what we can provide to the research that they’re interested in doing and come up with some other ideas.”

In the next eighteen months to two years, SNOLAB will be home to a new $30 million dark matter experiment called SuperCDMS, a US-Canadian collaboration. This new dark matter experiment will add to the current dark matter program that includes DEAP-3600, MiniCLEAN, PICO, and DAMIC. The lab is also working with the double beta decay community to decide what the next project related to that area will be—it’s expected to be a major $100 million to $150 million project that will take place in about four years.

“Coupled with that, we’ll still be looking to broaden the support we’re giving to the genomics and mining engineering areas so we can maximally exploit the facility that we’re creating here and get the best science out of it that we can,” Dr. Smith adds.