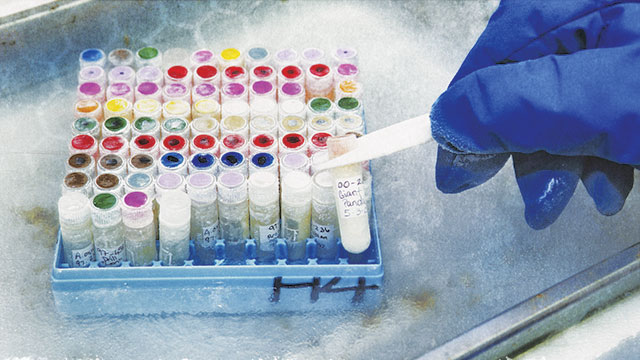 Even if an entire species is lost, the Frozen Zoo at the San Diego Zoo’s Institute for Conservation Research provides hope it can still be saved. The Frozen Zoo® is the largest, most diverse collection of cell lines in the world, with cell lines from nearly 1,000 species of mammals, birds, reptiles, and amphibians providing a critical resource for conservation efforts worldwide.

To generate those cell lines, the zoo collects skin or other tissue samples from rare and endangered animals, either after the animal has died or during a scheduled vet exam. “From those tissues, we establish living fibroblast cells and then we grow them to a sufficient quantity and freeze multiple vials in the Frozen Zoo,” explains Marlys Houck, a senior researcher who oversees the Frozen Zoo’s tissue culture group.

Later, researchers will thaw one of the vials for karyotyping, as a quality control measure to check that submitted samples really are the species and sex the submitter said they were. “Sometimes with all these different animals and because we get samples from different zoos, it’s possible that they could have misidentified the species or the sex,” Houck says.

As one can imagine, just trying to save as many animals as possible is the Frozen Zoo’s biggest challenge.

“Because we’re one of the only groups that does this, we feel a big responsibility to save everything, especially if it has died, because it’s the last chance to get a sample from that animal,” Houck says, adding that most cell lines grow in about three to five weeks, except for amphibian cultures, which take three to 15 months. Finding the time to culture those cells and making sure they have the optimal conditions to do so—all with a small staff— are also challenges.

Houck says an important part of dealing with those challenges is prioritizing which samples they grow.

“We just have to be very selective and take on the ones that are either underrepresented in the Frozen Zoo or that there may never be a chance to get again,” she says. “It’s impossible to predict what species will be in decline next, so we’re just trying to save it all.”

The majority of their focus is on species already in the United States, whether in zoos or in the wild, as it’s difficult to collect samples outside of the country due to permit issues and the need for samples to be fresh, Houck says. However, she adds that they do teach sample collection methods outside the United States.

“We’ve had some courses where we’re teaching our methods to scientists around the world so that they can try to establish similar Frozen Zoo-like collections in their countries using our methods and then they can do it on-site in their biodiversity hotspot areas,” she says.

However, sometimes there are situations where Frozen Zoo staff need to get on a plane quickly. In 2012, Lonesome George, the last Pinta Island tortoise, died of old age in his enclosure at the Tortoise Breeding and Rearing Center in Puerto Ayora, on Santa Cruz Island in the Galapagos. Staff there had refrigerated the body so it was still good for samples, but as Frozen Zoo staff tried to talk the Santa Cruz staff through the sample collection process, it became clear they didn’t have the proper reagents. “Suddenly we realized that if one of us didn’t go over there quickly, that was going to be the last chance to save cells from him,” Houck says. “So we scrambled, and within fewer than 24 hours, two of us were on a plane headed for the Galapagos.”

They made it on time to get samples, but because of permit issues, those samples had to remain behind. “One day we hope to bring them here, but the main point is that cells were saved,” Houck says. “If we didn’t do it right then, that would have meant that the last, living parts of Lonesome George were gone.”

“There are some challenging days thrown in, but the best parts are the constant variety and constant challenge, and especially knowing that we’re helping to save species.”

“We’ve increased our numbers to about 60 individuals now,” Houck says. “But we need to continue because the amphibians are really in trouble with chytrid fungus, which has led to the decline of amphibians worldwide.”

Another focus is northern white rhinos, as there are only three left in the world, though the Frozen Zoo has cell lines from 12 of them overall, and they will be used in a new project that aims to bring the species back.

If all goes well, the cell lines in the Frozen Zoo should outlive the humans who put them there.

“The cells that we freeze today—if everything goes right and there’s careful curating and nothing goes wrong—should be in the Frozen Zoo long after we’re gone,” Houck explains.