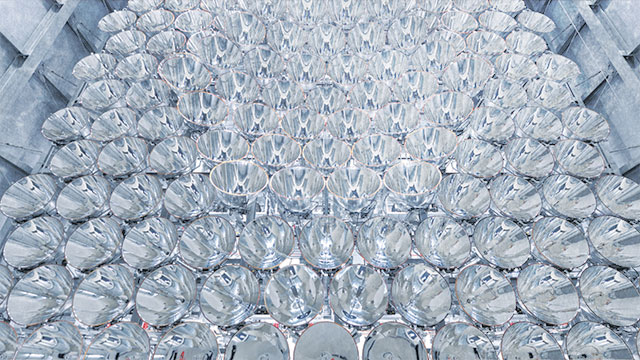 Synlight consists of 149 high-power light sources, each of which is a seven-kilowatt xenon short-arc lamp, as used in cinema projectors. Each source can be individually controlled, which allows various configurations and temperatures in the focal point—even in three simultaneous experiments.Photo credit: Markus Hauschild

Back in March 2017, the town of Jülich, Germany got a little brighter with the inauguration of the German Aerospace Center’s (DLR’s) Synlight research facility, home of the world’s largest artificial sun. With 149 high-performance xenon short-arc lamps to mimic natural solar radiation, the key focus of Synlight is on the creation of solar fuels for a commercially viable source of renewable energy.

An artificial sun is important in solar fuels research because real sunlight, particularly in Central Europe, is too variable to work with due to changing weather conditions and sunlight hours, according to the DLR website. Even sunny locations never have completely reproducible conditions. The conditions at Synlight, on the other hand, can be precisely controlled, making it perfect for testing different processes for producing solar fuels.

Now, with almost a year having passed since its official opening, the Synlight team is currently working on solar reactors that produce hydrogen.

“The process is based on a redox reaction and needs only heat—coming from the sun and concentrated by heliostats—and water,” explains Dmitrij Laaber, a research engineer at the facility. “In our facility, we test the reactors, improving them before the field test in the solar tower.” He added they have another key project set to start in 2018, but that it’s still under wraps for now.

Despite the size of the three-story building that houses the facility’s many xenon lamps, Synlight currently has a small staff of five—two engineers, one technician, and two students. And though the facility is still fairly new, the team hasn’t had to handle too many challenges.

“The positioning algorithms of the control system were improved in the summer,” Laaber says. “And we also had some minor problems with electrical parts— connectors—that met the requirements only in the technical documentation but, unfortunately, not in operation. These [issues] have already been solved by now.”

The failed electrical components were replaced by better ones from another supplier, and Synlight’s two students were the driving force behind improving the positioning algorithms, working on the math and source code for five months over the spring and summer, Laaber adds.

As far as maintaining such an impressive array—the facility’s short-arc lamps can produce 10,000 times the intensity of the solar radiation at Earth’s surface, and temperatures at the lamps’ target points can get as high as 3,000°C—Laaber says that apart from standard damage checks on the electrical and mechanical parts, cleaning the reflectors takes a while. The regular checks take about two days, while the complete check and maintenance, which needs to be done once a year, takes around a week.

“The height of the facility— the highest module is mounted 15 meters above ground—makes it a bit complicated,” he explains of the maintenance process.

For Laaber, working on such challenging research dealing with clean energy resources as well as operating a large facility that he had a hand in designing and building have been the most enjoyable aspects of working at Synlight. “Maybe the most exciting thing for me was the possibility to do the electrical design, the programming of the control system on my own, which is quite challenging, and you rarely get such a chance,” he says.

The main success of the facility so far is that it’s running so well, especially considering it was put together so quickly. Laaber adds, “The development time was only one year, and the design started with a blank piece of paper, because no one had ever built a comparable facility.”

Not too far into the future, the plan is to bring industrial customers to Synlight to test their materials, reactors, or anything that needs concentrated solar radiation, Laaber says. Though the team isn’t allowed to use the facility for commercial purposes until the summer of 2018, once that time arrives, they hope to have a good balance between basic research groups and industrial customers working on product development.