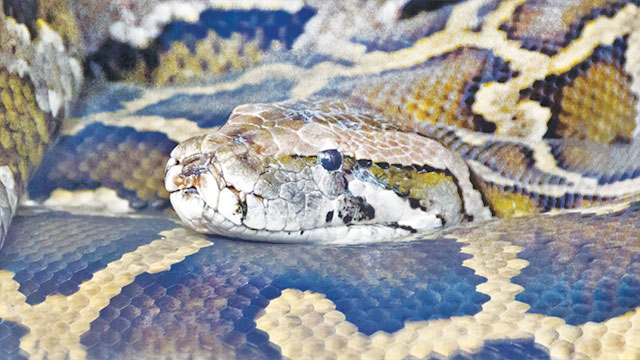 More than 100 million Americans are currently living with diabetes or prediabetes, according to the CDC. The rate of new diabetes diagnoses continues to climb each year, prompting teams of researchers to investigate potential new treatment options and ways to combat the symptoms of the disease.

The Laboratory of Evolutionary and Integrative Physiology at the University of Alabama, led by Dr. Stephen Secor, is taking a unique approach to learn more about how diabetes, heart disease, and other ailments affect the human body—by using the Burmese python as a model.

Unlike more traditional lab animal models, such as rats or rabbits, the python experiences an unmatched growth of the heart and pancreas within the time frame of just a few days. These extreme changes in the python make it easier to decipher the molecular mechanisms of cellular growth and functional remodeling, which ultimately can help determine the capacity to regulate gastrointestinal performance.

The lab is currently home to about 200 snakes, including about 45 pythons, 25–30 boas, and a variety of water snakes, corn snakes, and other species. The lab also houses a variety of reptiles, including bearded dragons and legless lizards.

Dr. Secor, professor in the Department of Biological Sciences at the University of Alabama, has become known as the “reptile guy” of sorts, having worked with frogs, alligators, turtles, lizards, geckos, and snakes, as well as invertebrates such as tarantulas, scorpions, and centipedes.

Secor discovered that the Burmese python exhibits an unprecedented increase in metabolic rate after feeding— as high as 40-fold with the digestion of meals. Postfeeding, the python’s organs also increase tremendously. Secor has reported a 70–100 percent increase in the python’s liver, kidney, pancreas, and small intestine, while its heart mass can inflate up to 30 percent. This all occurs within three days after a meal. These findings, among others from the Laboratory of Evolutionary and Integrative Physiology, are helping contribute to human biology and disease research.

“We can learn the basic mechanisms that underlie cellular remodeling and the capacity to regulate gastrointestinal performance including gastric acid production and intestinal nutrient transport,” said Secor.

The lab’s extensive work with snakes and other animals explores the “hows” and “whys” of physiological design. The team’s projects fall under two long-term interests— the adaptive interplay between feeding habits and digestive physiology and the integrative mechanisms underlying the regulation of physiological performance.

Secor’s interest in animals began at an early age while growing up on a horse farm in central New York. He was first introduced to the field of physiological ecology at the University of Oklahoma while studying for his master’s degree. Secor earned his PhD at UCLA and began work in snake ecology, primarily working with the sidewinder, a small species of rattlesnake. Secor collaborated with Dr. Jared Diamond, professor in the Department of Physiology at the UCLA School of Medicine, to determine whether sidewinders possess adaptive features in their digestive systems that allow them to feed so infrequently in the wild. For six years, the duo worked with sidewinders, then switched to pythons due to their more docile nature and easier maintenance. Secor’s work at UCLA was the springboard for developing the Laboratory of Evolutionary and Integrative Physiology at the University of Alabama in 2001.

As Secor explained, the lab has two primary areas of focus. The “Evolutionary” component refers to the approach the team takes in developing questions that have an evolutionary basis. They serve to address the “why” questions. For example, why do certain snakes (those that feed infrequently in the wild) exhibit such dramatic changes to gut structure and function, whereas snakes that feed frequently in the wild do not exhibit such changes? Or, what were the evolutionary pressures that underlie the distinct dichotomy in digestive responses among snakes, and does it translate to other groups of animals?

“To address such questions, one has to take a comparative approach and look at the physiology of multiple species to see to what extent have traits (like wide regulation of the gut) evolved independently or are to some level constrained by phylogeny,” explained Secor. The “Integrative” component of the lab refers to the approach the team uses to address questions at different levels of organization—from the population level to the molecular level. This falls under answering the “how” questions of physiological response.

“Many labs address the ‘how’ mechanisms, like cellular and tissue responses, and try to explore what molecular signals and step-by-step processes are happening in cells. And then there are those looking from a more evolutionary standpoint and ask, ‘Why is this current?’ ‘What’s been driving these phenotypes and features?’ This lab takes both approaches,” said Secor.

Currently, one of the larger projects taking place in the lab is a National Science Foundation-funded study to examine the underlying molecular mechanisms of intestinal remodeling. The project involves five species of snakes, an alligator, and a rat. The goal is to dissect the specific molecular pathways that result in the extreme phenotypic changes seen in infrequently eating snakes.

RNA sequencing is a key methodology the research team relies on to conduct their work because it allows them to look at gene expression and quantify it. “This methodology allows us to do a full profile on identifiable genes based on their sequence in the snakes and look at how their expression of those genes change[s] the treatment. In our case, comparing a fasting snake with a fed snake or different time points during the digestive process. That is just something we did not have 20 years ago. Now we can do this work in a very short period of time and have it much more complete than ever before,” explained Secor.

In addition to Secor, there are roughly 20 other researchers working in the lab, including postdoc, PhD, and undergraduate students. At any given time, the team could be working on about six different projects. Throughout his career, Secor has had great success through collaborations with researchers in a variety of other fields of interest. For example, thanks to his work with Todd Castoe, PhD, assistant professor in the Department of Biology at the University of Texas Arlington, the Burmese python was the first snake to have its genome annotated and published in the Proceedings of the National Academy of Sciences in 2013. Secor continues to welcome a collaborative approach as the leader of the Laboratory of Evolutionary and Integrative Physiology.

“I have many collaborative projects, and collaboration is certainly necessary given the complexity of the projects and the uniqueness of the study animals. For these projects, it really takes the expertise of different people to advance the work,” said Secor.

Surprisingly, there aren’t too many challenges when it comes to working with Burmese pythons in the lab. According to Secor, they are relatively easy to maintain, feed, and grow as they only need to be fed weekly or monthly. They are also fairly docile and can be kept in rack systems. Thinking long term, Secor and his team hope to further their exploration on mechanisms of cellular remodeling by developing and utilizing cell-culturing techniques for python cells.

“I am very curious about pursuing a cell-culturing approach. I’d like to culture snake cells to look at specific signals that are involved in the remodeling process. We hope to transition to a new lab facility that will have cell culture capabilities next year.”

Scientists Discover What Was on the Menu of the First Dinosaurs

Scientists Discover What Was on the Menu of the First Dinosaurs

Early Humans May Have First Walked Upright in the Trees

Early Humans May Have First Walked Upright in the Trees