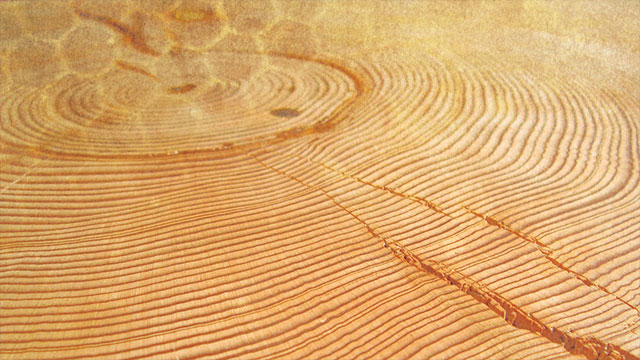 A Douglas-fir sample from the Southwest.Photo © Daniel Griffin

The Earth has had “libraries” for far longer than humans have been around. Simply by living and growing, trees have preserved Earth’s ecological and climate history in their annual rings; more recently, their rings have also captured human history, producing a much longer-term record than the data we’ve been able to record. Dendrochronology, the science of tree-ring dating, allows us to read those histories.

“In comparison with current technology, for example, measurements from satellites or meteorological stations of what’s going on in Earth’s environment, dendrochronology provides us with a very long timeline that allows us to understand ecosystem and Earth processes that operate on much longer timescales than just the short period that an individual, over his or her entire lifetime, would experience,” explains David Frank, director of the University of Arizona’s Laboratory of Tree-Ring Research (LTRR).

The LTRR, which is a university department made up of around 75 individuals, including faculty, students, staff, and even volunteer docents, is devoted to advancing dendrochronology, and thus our ability to gain new insights into this archive of the Earth’s past. Frank says that educating the next generation, through university classroom settings, mentoring in the lab, and a strong outreach program, is also a big part of the LTRR’s work. In terms of the science, their goal is to “remain at the forefront of the multidisciplinary application [of dendrochronology],” Frank says, adding that, in a nutshell, they are using tree rings to understand interactions among ecosystems, human societies, and the Earth’s environments.

Compared with many of the trees that LTRR researchers study, the lab itself has a short history. Founded in 1937 by Andrew E. Douglass, the pioneer of dendrochronology, the lab was the first of its kind in the world and remains the world’s largest facility devoted to tree-ring research. Originally housed in a “temporary” facility beneath the university’s football stadium, 75 years later the LTRR was relocated to a new 17,300-square-foot building featuring a unique tree-inspired design. Frank says some of the indoor features that stand out are a large sequoia cross-section and petrified wood in the floors of the lobby area, which are “ideal for both performing and teaching the science of dendrochronology.”

In addition to offices and a multipurpose lecture/classroom/workshop space, the facility includes a number of lab areas that are divided by their purpose. One area, for example, is focused on looking at the chemical and isotopic abundance of carbon and oxygen molecules in annual rings, whereas another laboratory area is focused on making ring-width measurements to answer questions related to archaeology, and so on, Frank explains.

The LTRR’s archive of tree-ring samples is another standout feature, including well over one million specimens collected by UA staff, students, and faculty over the past century as well as those sent to the facility from researchers around the world.

“These samples have been collected from ecosystems that are either very special or might not exist any longer, and from archaeological sites,” Frank explains. “The archive allows us, and also our international collaborators, to go back and perform new measurements on samples that were collected a long time ago. If you think about how technology continually improves, changes, and advances, this archive is a really important part of the lab.” With advancing technology, the LTRR researchers and students are able to answer questions that were not even conceived of when the specimens were initially collected.

The multidisciplinary nature of the research performed by the facility is another aspect that makes it unique.

“We have folks here working in archaeology, climatology, and ecology,” Frank says. “This allows us, within one institution, to cover many of the interdisciplinary applications of dendrochronology.”

Those researchers are involved in so many interesting projects that it’s difficult to choose just one or two that stand out, Frank says, but one special area of focus for the lab is on bristlecone pine trees, a species that grows in the high elevations of the western parts of the US and can easily live to be 2,000 years old, with more exceptional individuals in the 5,000-year-old range. By taking increment cores—essentially pencil-thin biopsies—of living trees and extending the record with well-preserved wood material from trees that died millennia ago, lab staff have been able to develop a roughly 10,000-year record of tree growth, Frank explains.

“Those [bristlecone pines] are also special because they’re actually the world’s longest-lived organisms,” he says. “If you think about that in human generations, these trees can live for well over 100 human generations and record the Earth’s environmental history in their annual rings.”

While the multidisciplinary aspect of the lab’s work is its main strength, Frank says it can also be a challenge, “because it requires overcoming the typical disciplinary barriers and backgrounds, methods, thinking, and conventions.” However, they work to minimize those barriers just by being persistent, communicating, and being open to collaboration. In fact, collaborating with colleagues, both within the LTRR and the university and with those who work abroad, is one aspect Frank enjoys most about his work. A second aspect is the diverse nature of the work itself.

“One day you could be out in the field, working with a chainsaw or just hiking in a remote location to collect samples, the next day in the laboratory working with very precise equipment to perform measurements, and then, on the third day, maybe collaborating with a climate or vegetation modeler,” he says.

The technology used by the LTRR is also a highlight. Great science can be accomplished with simple equipment, such as increment borers for collecting the aforementioned increment cores from trees in the field, as well as with microscopes and scanners to analyze those samples in the lab.

“That’s the basic minimum of what’s needed, but we’re in the process of expanding our facilities and just trying to develop new measurement techniques for the tree-ring samples,” Frank says.

To achieve those new measurement techniques, the lab will be adding in-house mass spectrometry facilities and, recently, one LTRR faculty member received a grant for X-ray fluorescence instrumentation. That technology will allow them to measure the elemental composition of tree-ring samples as well as artwork or archaeological artifacts, he adds. All those improvements will help researchers better understand the information archived in tree rings, in turn offering a clearer picture of our past—and a better idea of our future—than if we had only our own human records to rely on.

“[Dendrochronology] provides a much longer window to test and frame our knowledge of how the planet Earth’s societies and ecosystems have changed over time in the past, and will do so in the future,” Frank says.