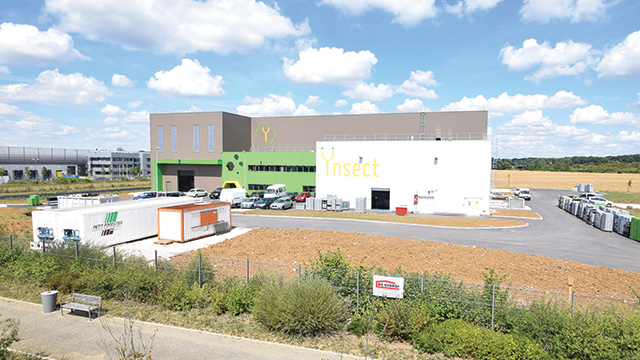 It’s no secret that the world’s oceans are under stress, both from pollution and depletion of resources. Overfishing, in particular, has taken a toll on fish populations, an issue exacerbated by the use of small fish to make animal feed. French company Ynsect aims to help ease that strain on fish populations by producing an alternative, insect-based feed for the fish farming industry to replace fish meal.

“The population of fish is shrinking just to feed other animals,” Ynsect CEO Antoine Hubert explains. “Our goal is to create a product similar in protein content to fish meal.”

The company, which farms and processes mealworms (the larval stage of a common beetle) to produce its high-protein fish feed product, isn’t the only one involved in insect-based feed, but Hubert says there are a few things that set Ynsect apart.

Hubert says that while they researched several species of insects after the company first formed in 2014, they chose mealworms not only for their high protein content, but also due to their density of production, quality, supply, and acceptance. “We are focused only on mealworms [at the moment], but that doesn’t mean we won’t work on other species in the future,” he says.

Another aspect that sets Ynsect apart is that it’s the only company that has the technology to produce its feed on a large scale—tens of thousands of tons of product per year per factory, Hubert says.

“It’s difficult to produce these quantities of insect protein,” he says. “We have designed and patented a technology that makes it possible. So far we don’t see any similar technologies that can scale at this level, either with flies or beetles.”

At 2,000 square meters, the company has what Hubert believes is the largest private research center focused on insect-based feed in the world. Here, they work at a smaller scale than at that of the company’s 3,000-square-meter production facility. “We have a very small farm to follow different parameters at the lab level, and that gives some inputs for the factory,” Hubert says of the research center. At the center, they process insects after slaughtering to measure protein and fat content, using all the technology you’d normally find in a biology lab—gas chromatography, high-performance liquid chromatography, polymerase chain reaction instruments, viscometers.

“In the factory where it’s large scale and much, much bigger, we have different robots handling all the farming operations,” Hubert says. “We have the farm on one side and we have the separation of the insects into protein and fat on the other side.” Those robots feed, harvest, and sort the insects according to their stage of growth, and also collect and separate their manure and eggs.

While Ynsect is unique in the insect-based feed world, Hubert says the company has faced the same key challenge faced by other such companies—regulations. Until recently, insect-based feed was not allowed in the farmed fish industry in Europe. After years of discussions with European Union officials through an association called the International Platform of Insects for Food and Feed, of which Hubert is president, the EU Standing Committee on Plants, Animals, Food and Feed voted in December 2016 to allow insect proteins to be used in fish feed in Europe starting July 2017. Only protein from eight insect species, including that from mealworms and two species of flies, will be permitted, Hubert says. 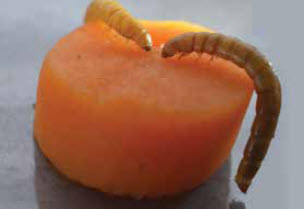 Ynsect uses mealworms, the larval stage of the common beetle species Tenebrio molitor to produce its insect-based fish feed.“Then there’s the commercial bottleneck, so it’s now less and less [difficult] because we have been proving the quality of our product through different animal trials and the results have been very good,” Hubert says. “The animal trials are going very well.” For example, in one trial with shrimp that were fed the Ynsect product, they saw around a 34 percent increase in body weight compared with shrimp fed a commercial diet that included fish meal, and mortality was reduced by four times in shrimp affected by early mortality syndrome.

He adds that technology and scaling up production are other challenges Ynsect faces. “There is no company that has reached the sufficient scale to provide volumes at competitive prices today,” Hubert explains. Ynsect recently completed a $15.2 million Series B round of fundraising in December 2016 that the company aims to use to increase capacity by building a new factory, also based in France.

“We hope with the factory we build next year, we’ll be the first and only [insect-based feed] company on the market with large volumes and a product competitive with fish meal,” Hubert says.

Longer term, the plan is simply to continue to grow the company, building factories all over the world to meet global demand for its product. North America and Southeast Asia are the first areas Ynsect is considering for future expansion.

Now with 50 employees, including the three friends he started Ynsect with, Hubert says building a company from the ground up—starting from an initial idea in 2011 to where Ynsect is today—has been a very rewarding experience. He’s says he’s looking forward to what the future will bring as the company continues to grow.

“Just seeing the company growing, day after day, it’s a pleasure,” he says. “It’s a very big feeling of happiness and achievement. But it’s just the beginning.”