When a company decides to make a change, even when things are going well, employees get nervous. Acknowledging their concerns helps reinforce the feeling that youre all in this together, critical in reassuring people that you really do have their interests at heart.

Simple Steps for Helping Your Staff Overcome the Shock of Change

When I arrived in northern California in 1989, I was just in time for the Loma Prieta earthquake. The experience of having the earth start moving under one’s feet is an unsettling one. When the quake doesn’t stop immediately, the unsettled feeling increases much faster than might seem rational to someone not experiencing the event. Even after the quake is over, many people report jumping whenever the ground shakes from a subway going underneath or a large truck going past; the first night after the quake that the cat jumped on the bed, I just about shot through the ceiling. Fundamentally, having something whose solidity we take for granted suddenly stop being solid is a very disturbing occurrence.

Despite this, businesses subject employees to the metaphorical equivalent of earthquakes all the time. No, the building doesn’t shake; the job does. When a business decides to make a significant change, some aspect of the job suddenly becomes uncertain. Even, or perhaps especially, when management insists that the change is a good one, employees are still nervous and uncomfortable. The less their concerns are dealt with in a constructive way, the worse it gets. This translates into reduced job satisfaction, lower performance, and decreased loyalty. In other words, the result of poorly managed change is lower revenues for the company.

At one company I worked with, the new CEO’s vision involved very substantial changes to the way training was conducted. Existing trainers went ballistic. They saw the new policy as undermining their authority, compromising the mission of the company, and reducing the quality of the classes. It wasn’t long before both parties were so busy screaming at each other that neither one could hear what the other was saying. It was only after talking with both parties, and educating them about the concerns, and fears, each one had, that the organization was able to move forward. The CEO was able to step back, focus more on the outcomes, and solicit input on the best ways to get there; the training staff felt they had a voice in the process and were able to come up with several excellent ideas to move the process forward.

The fact is, when a company decides to make a change, employees immediately wonder how that change will affect them. Even when things are going well and most changes do not involve people being laid off, benefits being cut, or salaries being reduced, change makes people nervous. They wonder how they’ll fit into the new world order; whether the company will still meet their needs; whether the company will still hold to the ideals that attracted them in the first place; whether they will feel proud or ashamed of working for the company; even whether the company will survive the change. If those questions are not addressed, people will start to focus on them to the exclusion of getting work done. Rational argument is surprisingly ineffectual, even when dealing with people who are seen as, and consider themselves, extremely rational.

I worked with one software organization for which we needed to change the way defects were tracked and reported to engineering. The assurances that the new process would be easier, take less time than the old one, and result in a higher quality product didn’t matter. Even the fact that a weekly, all-day bug-tracking meeting was eliminated and replaced with a brief status meeting didn’t matter. What mattered to people was that something that they saw as inviolate was being changed, and thus their whole image of the company was being changed as well. Engineering had always had the final say over which bugs were fixed and who fixed them. Changing that made the engineers feel that their competence and autonomy were being threatened. The initial response was one of continual, passive resistance. Dealing with that resistance involved helping all parties recognize that they had the same goals for the company, the product, and each person’s ability to manage his or her own time. It meant addressing fears, rational and irrational. Once it became clear that the goal wasn’t to assign blame, but to enhance the customer experience without increasing demands on engineering, the engineering team became an enthusiastic supporter of the new process.

I frequently hear that people “do not like to change.” In fact, that’s not really true. What people don’t like is being changed by someone else. When people are confronted with the prospect of change, there is a window of opportunity while they take in the news and evaluate the situation. During that window, most people are initially ambivalent. It’s when they are told how great the change will be, how there’s nothing to worry about, and how they should just go along because there really isn’t any choice, that they start resisting. When people are trying to make up their minds how they feel about something, pushing them tends to produce an immediate, and opposing, reaction.

So how do you defuse this natural resistance before it becomes active or passive rebellion, or a mass exodus of employees? Start by recognizing that resistance is not something to smash through; as in the practice of jujitsu, resistance is a signal that you are moving too quickly. Slow down and acknowledge employee concerns; don’t try to minimize them or ignore them. That only sends the message that the concern must be really serious because you aren’t willing to discuss it. Acknowledging their concerns also helps reinforce the feeling that you’re all in this together: quietly reinforcing a sense of community is critical in reassuring people that you really do have their interests at heart.

Involve the employees in identifying the disadvantages of not changing. Present the situation to them and ask them to tell you why doing nothing may be a bad idea. Ask open-ended questions: “What are the biggest threats we face if we do nothing?” is better than “Do you think there’s a problem with our doing nothing?” Once they’ve identified the problems with doing nothing, then you can transform those problems into the advantages of making a change.

Especially if your firm is large, periodically summarize and repeat back the feedback you’re getting. Make sure employees know they’re being heard.

Create a compelling, vivid vision of the brave new world. Once people are thinking about the advantages of change and the disadvantages of staying put, it becomes important to give them a place to go. Don’t present the vision as set in stone but as a work in progress.

Invite your employees to become part of the change process, but don’t try to force them. At one company, each employee was ordered to come up with two ideas to move the company forward. While that may sound like a great way to include everyone, in fact it was seen as just another way to undermine autonomy and get people to eliminate themselves. Leave the door open, invite opinions, and recognize that enthusiasm takes time to build.

Brainstorm with employees on how to change and what changes will be best. Forge agreement on the ultimate goals of the change process. Treat objections as opportunities to develop innovative solutions, not as signs of argument or disloyalty.

Look for opportunities to give each employee as much autonomy as possible in implementing the changes. Remember, your goal is to get everyone to the same place at about the same time; it doesn’t necessarily matter how they get there. Furthermore, the more actively people are involved, the less they’ll feel like they’re being changed and the more they’ll feel like competent, respected members of the team.

Praise the behaviors you want to reinforce. If you want people to contribute ideas, praise those who come up with them, whether or not those ideas end up being used. It takes a lot of unworkable ideas to produce one really good one. If you praise success, people are less willing to take risks than if you praise the process.

While fighting through resistance may feel like the natural way of doing things, in the long run it’s not only counterproductive, it’s also painful, unpleasant, and exhausting for all concerned. What are you doing to make change easy? 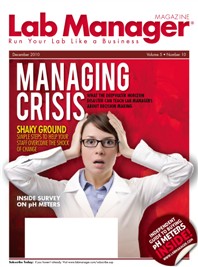 Taking a look at the recent Gulf of Mexico oil well blowoutthe greatest industrial accident in historylab managers can find useful examples of similar decision-making failures that can occur in laboratory environments.