The Politics of Personalities

Employees with this kind of selfregard and ambition may not always be a bad thing in the workplace. But in their most virulent and destructive form, these coworkers will often do what they need to do to succeed at the expense of others, clawing and scratching their way through the day and leaving their Machiavellian imprint on everything they touch.

There is ample clinical science and popular psychology surrounding the phenomenon of the Machiavellian personality. Some have called the trait akin to narcissism and psychopathy. Deriving its name from the Italian philosopher Niccolo Machiavelli, who wrote “The Prince,” a book that seems to largely condone unscrupulous politics, the term “Machiavellian” in the workplace has a negative connotation and is often used to describe people who have no problem deceiving and manipulating others to get what they want.

In essence, the Machiavellian coworker is the person who may eventually stick that proverbial knife in your back.

In a lab setting, this behavior has the potential to be not only annoying and worrisome, but unethical. Take for instance a project in which both collaboration and confidentiality are key. If there is a bad apple in the bunch, you may not be able to trust him or her to hold that confidentiality as sacred. What if that coworker were prone to share details of the project with someone outside the lab who has a competing interest? What if that coworker were to take a project’s findings somewhere else to further his or her career?

This type of scenario shows why, unfortunately, managers cannot avoid dealing with Machiavellian tendencies in the workplace. Ignoring such behavior certainly won’t make it go away and could actually make everything worse for the entire team. They could get the message that management doesn’t care about such behavior— or that treating people in such a way is an acceptable way of conducting business in that particular lab.

This is where the extremely difficult part of managing people comes in, especially with all their great—and unsavory— qualities tending to dovetail in very complex ways on the job. How can you consistently and successfully work through these daily political scenarios and battles? How can you encourage both a spirit of self-regard and innovation as well as one of working collaboratively, respectfully, and openly with the whole team?

If there is indeed a Machiavellian personality in your midst, again, as a manager, you must first recognize that the coworker exists. For managers, this can often be the most difficult part of the equation—recognizing that there is a problem.

Unfortunately, we all tend to avoid problems, but managers do this at their peril, especially when it comes to an employee who could potentially undermine an entire staff or business.

Second, managers must recognize that there is no one tried-and-true method for tempering the personalities of others. This is where elusive “soft skills” must come into play, which will often dictate how to deal with employees on a case-by-case basis. In extreme cases where Machiavellian politics may indeed have the potential to tangibly threaten a project, it is crucial to take action quickly and to perhaps seek expert help from another manager, HR, or other trusted source to play an advisory role.

The worst-case scenario for any lab team is one in which bad behavior forces good employees to leave. In the science marketplace today, where finding and retaining good talent is always increasingly challenging, no manager wants to see that happen in the ranks.

Always take heed when a Machiavellian personality reveals itself in the workplace, for the sake of the health and well-being of everyone on the job.

Research reveals that your eyes may be an indicator of your personality type, simply by the way they move

New study suggests that a man’s attachment style may influence his perceptions of whether a woman is interested in him ... 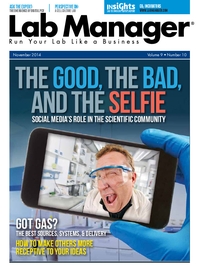 The Good, The Bad, and The Selfie

The barbarians were at the gates, the handwriting on the wall. Their digital firepower was unstoppable.Without further ado, they stormed the ramparts, overrunning scientific strongholds. There is no turning back now. Social media is a juggernaut, its impact profound and already making itself felt in ways that few could have envisioned.

Have you ever presented a great idea, only to see it ignored while other less important things were discussed? This happens to everyone, but it is especially painful for those of us in the workplace.
Analytical, research, and testing laboratories are becoming ubiquitous across a wide range of industries, from clinical and pharmacological research to consumer products and environmental analysis. In fact, virtually every product we encounter in our daily activities has likely been examined in an analytical lab at some point in its development.