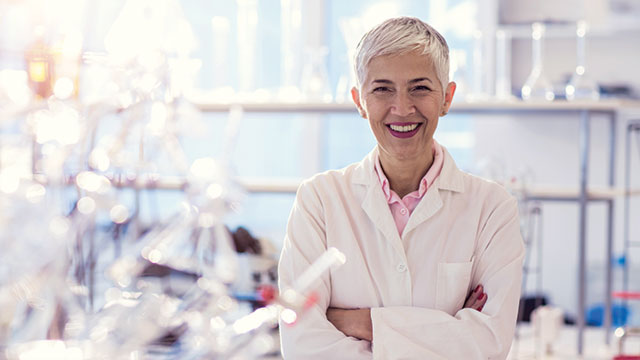 The past year proved to be a special time for women in science. For just the third time in more than 100 years, a woman—Dr. Donna Strickland—won the Nobel Prize in Physics, and Dr. Frances H. Arnold became the fifth woman to win the Nobel in Chemistry. These honors mark the first time that women have been honored with both a Chemistry Nobel and Physics Nobel in the same year. Strickland received the prize based on her very first scientific paper, which was published in 1985 while she was working as a graduate student. “It is truly an amazing feeling when you know you have built something that no one else ever has—and it actually works. There really is no excitement quite like it, except maybe getting woken up at 5 am because the Royal Swedish Academy of Sciences also thinks it was an exciting moment for the field of laser physics,” Strickland joked during her acceptance speech in December 2018. Strickland spent a portion of her speech discussing the two women who won the Nobel in Physics before her—Marie Curie and Maria Goeppert Mayer— saying she was “humbled to be in their company.”

Although the list of previous Nobel Prize winners in science fields is male-dominated, the two latest winners predict that women will be better represented in the future. During a news conference at Caltech, Arnold said she envisions a steady stream of Nobel Prizes in Chemistry will be given to women. “As long as we encourage everyone—it doesn’t matter the color, gender—everyone who wants to do science, we encourage them to do it—we are going to see Nobel Prizes coming from all these different groups. Women will be very successful,” she said.

Additionally, there was a record-setting 21 women (out of 32 recipients total) chosen to be 2018 American Rhodes Scholars, including Alaleh Azhir, biomedical engineering, computer science, applied mathematics, and statistics senior at Johns Hopkins University, and Lia Petrose, neuroscience and economics graduate of the University of Pittsburgh. While these examples demonstrate the progress being made for gender equality in science, especially compared to just a few decades ago, statistics show that women are still underrepresented in some STEM fields. In the United States, women currently make up nearly half of the total workforce (48 percent), but hold less than a quarter (24 percent) of overall STEM positions.1 However, the numbers vary depending on the specific field. For computer and mathematical occupations, women only represent 25.6 percent, and similar representation is seen with environmental and geoscientists at 25.7 percent. But biological scientists (50.1 percent), medical scientists (52.8 percent), and chemists and materials scientists (44.2 percent) demonstrate a better balance, according to findings published in June 2018.2 “The research field for women scientists is moving slowly but steadily. The stereotypical view that science is not for women appears to be finally broken,” said Radhika Dixit, an applications scientist at Harvard Bioscience (Holliston, MA). Dixit wears numerous hats within her job, leading the technical support for the BTX brand of molecular delivery systems, as well as working closely with cross-functional teams including R&D, engineering, and marketing. 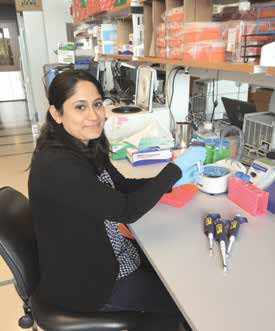 Radhika Dixit, applications scientist at Harvard Bioscience.While the scientific workforce is seeing more women enter, the same study from June found that there is still a significant lack of women in leadership or senior roles. Hundreds of initiatives and organizations have been developed to address this issue and support women in science. The Association for Women in Science (AWIS) is one such organization. AWIS is a global network of more than 100,000 members and supporters who inspire bold leadership, research, and solutions that advance women in STEM, spark innovation, promote organizational success, and drive systemic change. The organization hosts a variety of events and summits throughout the year and provides resources on workplace cultures, talent and leadership development, and retaining female employees. “AWIS has always been a conduit to meet like-minded women and allies in STEM whom I have learned a lot from,” said Tawni Koutchesfahani, senior director, Contract Manufacturing of Drug Product at Catalyst Biosciences (San Francisco, CA). “The power in exchanging stories and engaging with others who serve in STEM has a tremendous positive impact on one’s professional and personal growth.”

Another such organization is the Center for Creative Leadership, which hosts a program called Advancing Technical Women, an intensive skill-strengthening program designed specifically for early- to mid-career women who want to increase their visibility and improve their opportunities for advancement in the tech industry— an industry that has some of the lowest numbers for women among the STEM disciplines. The Advancing Technical Women program is backed by decades’ worth of research and real-world experience. The 1.5-day course teaches participants how to stand out among their colleagues, improve communication at the workplace, build a strategic network, and implement an action plan to reach their full potential.

Employers can show increased support for their female employees who are pursuing leadership roles by approving attendance to workshops like this and encouraging participation in groups like AWIS, or even offering the opportunity to start a similar community on a more local level.

One possible reason for the lack of women leaders in science is that they are not always staying in the field long-term. Recent research from the Center for Talent Innovation showed that U.S. women who are working in science, engineering, and tech fields are 45 percent more likely than their male peers to leave the industry within the year.3 Challenges like establishing a positive work-life balance and unconscious bias are key reasons women may be leaving the industry before reaching their full potential. As with other industries, unequal pay is also a contributing factor. In the U.S., women in computer, engineering, and science occupations were paid an estimated 79.2 percent of men’s annual median earnings in 2016.4

Unconscious bias in the workplace is a quiet but common problem among science-related jobs. The term refers to employers or managers unknowingly favoring men when hiring for new positions, selecting men over women for promotions, and recognizing men’s achievements more than women’s. For example, a study conducted by Columbia University, Northwestern University, and the University of Chicago found that both male and female hiring managers were two times more likely to choose male candidates for mathematics and science careers over female candidates, even though all applicants had equal skills. Additionally, when an applicant who performed worse on a test was chosen over an applicant who performed better, two-thirds of the time the chosen candidate was a man.5 “We need to think about how to fix the system and process that women and men operate in their professional setting, where both women and men are compared by their performance and not by the representation of whether they are a woman or man,” said Koutchesfahani, who has been an AWIS member since 2008. Therefore, managers should be more aware of unconscious bias and need to objectively view women for leadership positions, offer more opportunities for seminars and other speaking engagements at conferences, and encourage more of a community-style network of women.

“With regards to challenges to being a woman in STEM, there is a lot of bias regarding how other scientists view the research conducted by their women colleagues; this hampers their confidence and they do not apply for as many grants as men do,” added Dixit.

Another unique opportunity for managers to foster female leaders is by creating a productive yet satisfying work environment. “Right around the time that you’re expected to be the most productive [in your career] is also kind of the time you’re thinking about getting married, having kids, and things like that,” said Dr. Brianna Mount, assistant professor of physics at Black Hills State University. Mount also runs the BHSU Underground Campus and participates in outreach programs to encourage interest in STEM fields among middle school students. Mount advises employers to be more aware of the personal obligations women may have outside of work. Taking time off work to start a family can be a difficult time, so making it clear that a two- or three-month leave of absence won’t be detrimental to an otherwise long and successful career could encourage women to return to the industry and continue to pursue their goals.

“We live in a world now where women want to be defined by their accomplishments outside of their home life, and they want to grow further like their male counterparts,” said Koutchesfahani. “As women face the challenges of having a satisfied work life, partners and loved ones are impacted directly. Thus, this becomes an issue for all companies—regardless of size or industry—to determine how they provide a work setting that allows for a woman to be able to be satisfied at her pace between her job and home-life needs.”

According to Koutchesfahani, this isn’t just an issue in the science fields, it’s a broader national issue. She believes a set of standards should be established that will help facilitate and provide resources, tools, and access for an easier transition for women who have kids and are working in management roles. “Until then, this is something [that a woman has] to determine on [her] own to find what works best for her life and to her satisfaction,” she adds.

While certain projects and workflows don’t always allow it to be possible, a more flexible work schedule can make all the difference. “Personally, I have faced multiple challenges related to worklife balance—long working hours and pressure to succeed in a cutthroat environment—but I was fortunate to work for a professor who believed that a flexible work schedule is critical for a happier, productive lab,” said Dixit. “At Harvard Bioscience, I work alongside many women including my manager. I have a good mix of work-life balance, work-related travel, and a challenging work environment,” she added.

Today’s scientific research can only benefit from more female leaders. Women leaders offer a unique perspective to solving workplace challenges and conducting research in the lab. Women offer empathy and support to colleagues while maintaining a high work ethic and multitasking. Career-driven women are an asset to any lab or facility, and employers who address the various factors at play outlined above will see the positive effects of having individuals with these skill sets and more on their team.

1. Ryan Noonan, Women in STEM: 2017 Update (US Department of Commerce, Economics and Statistics Administration, Office of the Chief Economist, November 13, 2017).