Even though he had just landed a grant for an exciting new project to study why and when people fail to monitor their progress towards a goal, University of Sheffield social psychologist Thomas Webb was a little stressed. “It’s only me and the two postdocs, and I knew it would come down to my management style,” at least as far as getting the work done. So he set up weekly meetings, in which the group outlined the tasks that needed to be performed and set deadlines for each task.

As with most young investigators, Webb’s success in academia relies in large part on the initiative, drive, and creativity of his research team. Webb is one of a number of social psychologists whose research grapples with the question of what motivates people, what makes them adopt new habits or break bad ones. It can be challenging to apply some of the findings to one’s own research team, when faced with the same questions that challenge every new manager: how to get the most out of your team without micromanaging them.

Research teams comprise postdocs, graduate students, and research assistants, individuals who each have different career goals and are “highly intelligent and want autonomy,” says Vish Krishnan, a management scientist at the University of California, San Diego (UCSD) Rady School of Management. “Managing such teams is like herding a bunch of cats,” he says. The good news is that some recent research on keeping people motivated is providing new explanations for some old tenets of good management.

While a laboratory may have a single overarching goal or research focus, the daily work of science requires the completion of multiple subgoals, some of which may not seem as glorious or as relevant as some team members would like. One way to get everyone working as a team is to discern how best to motivate each of them. “Some people are better at avoidance goals. Some are better at approach goals,” says David Neal, a social psychologist who works on habit formation and is cofounder of Empirica Research, a market research firm. Most people will know which group they belong to: do you tend to study for an exam because you want the “A,” or do you study because you’re afraid of failing? “There are individual differences,” says Neal. Find them out, and you can frame tasks as either gaining a positive goal or avoiding a negative one. 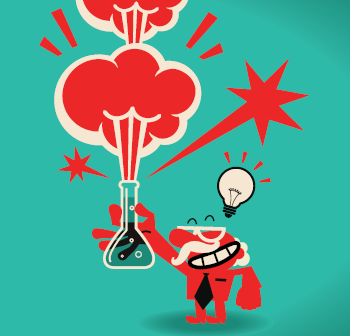 “Grit” is the word psychologist Angela Duckworth of the University of Pennsylvania came up with to describe the characteristics of top leaders who are passionate about a goal over the long term. People who make it through military boot camp have it, and it’s likely that successful scientists have it too. Grit is defined as a characteristic of someone who sustains interest in projects, does not give up despite encountering obstacles, and diligently finds ways to improve his or her work. “Science is so long-term and so uncertain. You have to be in there for decades to see the impact of your work,” says Duckworth. While some people seem to come by grit naturally, Duckworth believes that it is a trait that can be developed, and part of it comes from becoming more comfortable with frustration, she says. In a laboratory setting, regularly assessing obstacles that can lead to frustration and delay can help the team get into the habit of solving problems early.

“We prefer to do things correctly rather than incorrectly. We prefer to be praised,” says Duckworth. This is in part what makes getting negative feedback so difficult. But when a person can focus at least a part of each day on the uncomfortable things that he or she is not good at, says Duckworth, it usually leads to tremendous improvement over time. But it isn’t easy. During one-on-one meetings, managers can ask team members to make a list of areas they want to improve upon—whether it is expertise at a particular protocol or personal skills such as time management or writing—and to make a plan for improving those areas.

“Perfectionism can lead to myopia and to not searching widely” for solutions, says Paul Schoemaker, a professor of marketing at the University of Pennsylvania’s Wharton School. As a society, “we emphasize perfection too much, at the expense of success,” he says. Acquiring and cultivating grit requires making mistakes, Duckworth says. When experiments fail, a careful assessment of all the specific reasons for the failure can make the setback feel more like an opportunity to learn than a disappointment. At lab meetings, have your team members get in the habit of presenting each setback along with an assessment of why it occurred and a possible solution. “Most entrepreneurs, and the venture capitalists who invest in them, live by a bold mantra: fail fast, often, and cheaply,” writes Schoemaker in his book Brilliant Mistakes: Finding Opportunity in Failure.

Allow a bit of sloppiness

The discoverer of penicillin, Alexander Fleming, was as playful in his scientific habits as he was in his life. “When he played golf, he wouldn’t follow the rules,” says Schoemaker, who writes about Fleming in his new book. Nor did he follow today’s standards of laboratory hygiene, letting his bacterial cultures be overgrown by the Penicillin fungus that ended up killing them—a slip-up that has saved millions of lives. Lab PIs can challenge their team to come up with an experiment that they think is sure to fail, and then perform it to test their assumptions.

At times managers will perceive a lack of motivation or progress from a particular team member. Here are a number of situations that could explain the apparent loss of interest.

The goal is not valued. In order to motivate, a goal must be both challenging and specific. If the task is deemed too simple, the goal can lose its value to a team member, and thereby lose its ability to motivate.

The goal is perceived as unattainable. The goal may still be valued highly, but a person’s confidence that the goal is attainable falters. This can happen when a member of the lab feels as if progress is not being made despite his or her efforts.

Overcorrection feels like underappreciation. Micromanagement—correcting the details of every task—can make people feel as if their work and effort is not valued, which can lead to a loss of motivation. Try limiting a critique to five things, in grading undergraduate dissertations, for example, says Webb. That helps the student focus on the most important problems.

Although grit and perseverance are important traits, sometimes rigor needs to take a backseat to creativity. “Physical and psychological distance from the workplace seem to affect creativity,” says UCSD’s Krishnan. While it might help to hold some meetings outside of the lab, Krishnan says the same idea can be implemented with a thought experiment. Have your team members imagine trying to solve a problem under new constraints, says Krishnan. What might a competitor’s lab do; what would a lab with few or many resources do? Imagining the problem in a different context can help “people relax their assumptions,” he says.

Goals, such as getting grant funding, should not be put on your task list. “If my task for today is to write this paper for Science,” then it’ll never get done, says Neal. “Motivationally speaking, breaking a project up into the right steps for you” can be a great help. “Make explicit lists at the right level of granularity,” suggests Neal. If it looks as though one of your team members is not performing up to par, have them show you how they’ve broken up the task into manageable chunks that can be assessed individually, and work with them to do so if they haven’t.

Keeping on task can require a lot of self-control, which some researchers think people have in limited quantity. One study showed that people who forced themselves to eat radishes rather than chocolates quit faster on a puzzle task than those who did not have to exert self-control (J Pers Soc Psychol, 74:1252-65, 1998). A recent study by Gráinne Fitzsimons at Duke University’s Fuqua School of Business showed that people may be more effective when they outsource their need for self-control. An example is getting a running partner: having a friend collect you for a run removes the necessity of motivating yourself in isolation. This idea can be applied to a laboratory setting by incorporating a social aspect into the pursuit of goals. Although working in teams does not apply to every task, creating situations where tasks are done in parallel could improve overall motivation.

Try a new kind of meeting

Meetings can trigger motivation by giving goals a social aspect. Here are two styles of meetings that might help bring creativity and focus into your workflow.

THE SHORT AND QUICK

One computer science laboratory described breaking up their hour-long weekly lab meeting, which had focused on presentations, into an abbreviated version consisting of two to three 15-minute lab meetings every week, providing a speed-update on each member’s progress, PIs included. Each person would describe what she or he had done since the last meeting; list obstacles; and state the work to be completed before the next meeting. It helped team members feel they had to make progress every day, gave them insight into the lab manager’s goals and work process, and created a focused community interaction in which everyone was motivated by each other’s progress. It also gave the PI insight into problems as they arose, which allowed the scheduling of “on-demand” meetings to address the issues. (Read the full article or the abbreviated form at Communications of the ACM, 53:30-31, 2010.)

Working to improve your laboratory process and your research output can be time-consuming and feel unnecessary, especially when things are running smoothly. But it’s also the best way to institute efficiency by focusing on the process rather than the person. Schoemaker came up with a method to identify the areas in his market research organization that might benefit from employing a new approach. He found that his team always assumed that client requests for a proposal and cost estimate would not pan out, because they indicated a lack of sincere interest. When Schoemaker tested the accuracy of these assumptions, he discovered that, with minimal additional expenditures, he could grow his business by asking younger associates to vet the requests. Here’s how to find areas for improvement in your own lab:

1. The possible benefit of finding a better answer outweighs the cost of the test.

3. The problem is too complex to solve as a thought experiment, without empirical data, and would benefit from experimentation.

4. We haven’t got empirical data because this assumption is not based on much experience.

5. The lab’s experience with the assumption or problem is limited such that the need for innovation is high and promising enough to try.

Edyta Zielinska is a senior editor for The Scientist magazine. She has enjoyed writing and editing Careers articles ever since she started with the magazine six years ago. Edyta can be reached at ezielinska@the-scientist.com or by phone at 215-240-6014.

This article was originally published in the June 2012 issue of our sister publication, The Scientist.

Finding Your Leadership Style for the Lab

Finding Your Leadership Style for the Lab

How Others’ Exceptional Successes Motivate Us to Improve

How Others’ Exceptional Successes Motivate Us to Improve