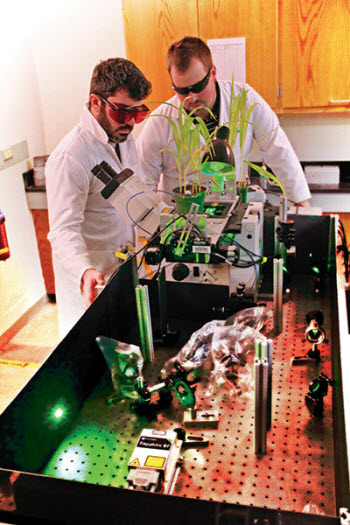 Graduate research assistants Daniel Freppon, left, and Brett Boote in Emily Smith’s research group use Raman spectroscopy to study growing corn plants. The technology allows measurement of chemical composition within the plant without disrupting its growth cycle.Photo courtesy of the Ames LaboratoryBiomass holds great promise as a petroleum replacement, but unlocking its true potential remains a puzzle. A group of researchers at Iowa State University and the U.S. Department of Energy’s Ames Laboratory hope to develop the pieces of that puzzle to create a clearer picture of what takes place within a plant and how that applies to its downstream uses as biomass.

The $1.8 million, three-year project, funded by DOE’s Office of Science, brings together a diverse team of Iowa State plant scientists and computational experts, as well as analytical chemists from Ames Laboratory. The group will explore the fundamental ways plants produce and store energy, how to potentially optimize those metabolic processes, and then compile the vast amounts of information collected in an accessible format.

“It’s very fundamental science,” said Basil Nikolau, director of ISU’s Center for Metabolic Biology and one of the principal investigators on the project. “Everyone can easily recognize a plant, but as you use ever more powerful microscopes to look at it in more minute detail, down to the molecular level within individual cells, you lose context of it as a plant. So we’re looking for a way to represent these details within the overall context of the plant.”

Plants use photosynthesis, a process fundamental for most life forms on Earth, to capture sunlight and convert it to chemicals. But how does that happen?

Related Article: Illuminating the Inner 'Machines' That Give Bacteria an Energy Boost

“We know the initial chemistry involves separating charged particles across a membrane,” Nikolau said. “At its core, this project will develop analytical imaging technologies to visualize the organization and dynamics of the membrane that enables this eloquent dance of molecules in and across the membrane to convert sunlight to chemistry.”

Though not useful as a biomass source, the team is studying Arabidopsis as a model system. The plant’s genome has been mapped and it readily lends itself to study. The group is also studying corn, another plant with a vast amount of genetic background information, and a crop that’s important to Iowa and as a potential biofuel source.

“You can grow it in a small space and it grows quickly,” Nikolau explained of Arabidopsis, “so you can produce six to eight generations in a year. It’s an ideal plant to study, and what we discover is generally applicable to other crops as well.”

Specifically, the group is using Arabidopsis plants that have been genetically altered to boost autophagy, a process plants use to survive resource (carbon or nitrogen) limitations. They’ll look at how the plants use a vesicle called an autophagosome to conserve biomass and energy to survive the resource deficiencies.

Analysis of the plant material relies on the technical expertise of a cadre of Ames Laboratory researchers. Using techniques such as Raman spectroscopy and stimulated emission depletion (STED) fluorescence lifetime imaging as well as more traditional mass spectroscopic methods, they are able to generate detailed information of not only the chemical makeup within the plant, but also the processes and changes taking place within the living plant throughout its growth cycle.

“Ideally, we want to be able to measure the plant as it’s actually growing, without disrupting it or extracting  material,” said Emily Smith, Ames Laboratory scientist and ISU associate professor of chemistry

“The STED gives us good spatial resolution so we can look at subcellular structures,” Smith continued. “The Raman imaging gives us the chemical analysis so we know, for example, what fatty acids are present.”

In addition to these techniques by Smith’s group and ISU researcher Jacob Petrich, the team is aided by ISU associate professor of chemistry Art Winter who has developed molecular probes that selectively “light up” or “turn on” certain elements within the cell that can then be captured by the STED imaging. Ames Laboratory scientists Sam Houk and Young-Jin Lee provide additional chemical analysis through advanced mass spectroscopy methods, and provide a means of validating the images obtained by the other imaging technologies.

“One of the downsides to using the techniques we’ve developed is that you can get so much information that one person couldn’t begin to sort out what’s important,” Smith said. “That’s where the computational techniques developed by Eve Syrkin Wurtele and Diane Bassham come into play to sort out the needle of useful information in the haystack of data to address the particular biological question we’re posing.” 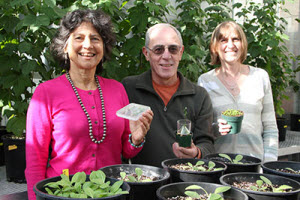 Iowa State University plant scientists (l-r) Eve Syrkin Wurtele, Basil Nikolau, and Diane Bassham display plant materials being studied in a campus greenhouse where the plants are grown.Photo courtesy of the Ames LaboratoryWurtele and Bassham, both professors of genetics, development and cell biology at ISU, use an integrated experimental/biocomputational approach to understand the factors that regulate plant development and composition. That includes an award-winning computer visualization program called Meta!Blast. Data can be imported into the program and it provides a visual depiction of what’s taking place within the plant at the appropriate cellular or molecular scale.

“The idea is that you have this visual environment that’s new to most people and you can do things like scan structures or molecules if you don’t understand them, get an explanation of the analytical technologies, and see multiple vantage points,” Wurtele said. “The various chemical and biological techniques let you create an image of the plant and its molecular components that is at a resolution from a multicellular level, like the surface of a leaf, to the cellular, into the organelles within individual cells, and ultimately the individual molecules.”

All involved say the project perfectly melds the strengths of ISU and Ames Laboratory.

“In our group, we’re all experts in our own domains, but I don’t think there’s one person who fully understands the other people’s technologies,” Wurtele said. “The idea behind this is to create a system where the actual data that’s obtained at different resolutions and spatial compartments is integrated so that anyone is able to access the data in an understandable form.”

“It’s a highly collaborative project,” Nikolau added, “and a very good fit between the biological and the analytical sides.”

“We developed these various analytical techniques for other purposes,” Smith concluded. “With this project, we’re able to apply them to biological materials. ISU is extremely strong in plant science and Ames Lab has vast analytical expertise, and it’s been great to see this synergy develop. Hopefully we can leverage that down the road on future projects.”