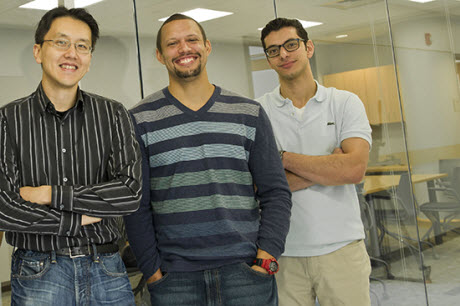 Douglas Densmore (center), an ENG associate professor, will lead the Living Computing Project, an effort to create a toolbox of catalogued biological parts that can be used to engineer organisms with predictable results, along with Wilson Wong (left), and Mo Khalil, both ENG assistant professors of biomedical engineering, and Swapnil Bhatia, an ENG research assistant professor (not pictured).Photo credit: Kalman ZabarskyThe rapidly growing field of synthetic biology has made long strides in recent years as researchers have modified the genetic makeup of living organisms to get them to behave in different ways—flagging the presence of toxins in the environment, for example. Researchers have done this by breaking down biology into basic building blocks. However, using these building blocks has been increasingly difficult without a clear design methodology and supporting quantitative metrics researchers can use to make decisions.

Douglas Densmore, a Boston University College of Engineering associate professor of electrical and computer engineering and of biomedical engineering, would like to take the guesswork out of biological design and speed the development of synthetic biology in the process. Working under a new $10 million National Science Foundation (NSF) “Expeditions in Computing” grant, Densmore will lead the Living Computing Project, a comprehensive effort to quantify synthetic biology using a computing engineering approach, and to create a toolbox of carefully measured and catalogued biological parts that can be used to engineer organisms with predictable results. These parts will allow the entire field to understand better what computing principles can be applied repeatedly and reliably to synthetic biology.

Densmore and Ahmad “Mo” Khalil and Wilson Wong—both ENG assistant professors of biomedical engineering—and Swapnil Bhatia, an ENG research assistant professor of electrical and computer engineering, will take the lead on the project, partnering with colleagues at MIT and Lincoln Laboratory over the course of the five-year grant. The award, part of a total of $30 million in NSF funding to three Expeditions in Computing projects, marks the first grant to explicitly explore computing principles in multiple living organisms and openly archive the results. The three projects—the other two are led by researchers at Princeton University and Cornell University—include scholars at 14 colleges, universities, and labs across a wide range of disciplines.

“This puts a stake in the ground to make synthetic biology more rigorous,” Densmore says. “We want to build a foundation that’s well understood, built to use software tools, and that can serve as an open-source starting place for many advanced applications.”

Synthetic biologists take snippets of DNA and combine them in novel ways to produce defined behavioral characteristics in organisms. For instance, Densmore envisions a day when one might engineer a cell to change state when it detects cancer. The cell could be introduced into a patient, retrieved after a time, and read like the memory of a computer, enabling detection of disease much earlier and less invasively than is now possible. Engineering that cell could be far easier and faster if researchers had a detailed inventory of parts and corresponding software tools they could use to create it.

“What is power consumption in biology?” Densmore cites as an example. “What are the metrics in biology that make sense, can be repeated, and are reliable? You can’t make decisions in engineering without metrics and quantifiable information.”

“Programming a flower to change color, a cell to repair damaged tissue, or a mosquito to defeat malaria is likely to require a different computational model than programming an app for your laptop,” says Bhatia. “Discovering this new type of computational thinking in partnership with synthetic biologists is what I am most excited about.”

Densmore hopes this project will take synthetic biology from an artisanal endeavor to a true engineering discipline with a solid, quantified foundation.

“Computation is important for moving any field forward, and that’s what we’re trying to do with synthetic biology,” Densmore says. “We’re trying to build a library based on computing principles for the whole community, an open-source repository of biological pieces that use those principles reliably, repeatedly, and with broad applicability.”

“The Expeditions in Computing program enables the computing research community to pursue complex problems by supporting large project teams over a longer period of time,” says Jim Kurose, NSF’s head for Computer and Information Science and Engineering. “This allows these researchers to pursue bold, ambitious research that moves the needle for not only computer science disciplines, but often many other disciplines as well.”