The Simons Array will be located in Chile’s High Atacama Desert, at an elevation of about 17,000 feet. The site currently hosts the Atacama Cosmology Telescope (bowl-shaped structure at upper right) and the Simons Array (the three telescopes at bottom left, center and right). The Simons Observatory will merge these two experiments, add several new telescopes and set the stage for a next-generation experiment.Photo Credit: University of Pennsylvania

The Simons Foundation has given $38.4 million to establish a new astronomy facility in Chile’s Atacama Desert, adding new telescopes and detectors alongside existing instruments in order to boost ongoing studies of the evolution of the universe, from its earliest moments to today. The Heising-Simons Foundation is providing an additional $1.7 million for the project.

The Simons Observatory is a collaboration among the U.S. Department of Energy’s Lawrence Berkeley National Laboratory (Berkeley Lab); UC Berkeley; Princeton University; the University of California at San Diego; and University of Pennsylvania, all of which are also providing financial support.

The observatory will probe the subtle properties of the universe’s first light, known as cosmic microwave background (CMB) radiation. The observatory will pay particular attention to the polarization, or directional information, in the CMB light to better understand what took place a fraction of a second after the Big Bang. While these events are hidden from view behind the glare of the microwave radiation, the disturbances they caused in the fabric of space-time affected the microwave’s polarization, and scientists hope to work backwards from these measurements to test theories about how the universe came into existence.

“The Simons Observatory will allow us to peer behind the dust in our galaxy and search for a true signal from the Big Bang,” said Adrian Lee, a physicist at Berkeley Lab, a UC Berkeley physics professor and one of the lead investigators at the observatory.

A key goal of the project is to detect gravitational waves generated by cosmic inflation, an extraordinarily rapid expansion of space that, according to the most popular cosmological theory, took place in an instant after the Big Bang. These primordial gravitational waves induced a very small but characteristic polarization pattern, called B-mode polarization, in the microwave background radiation that can be detected by telescopes and cameras like those planned for the Simons Observatory. 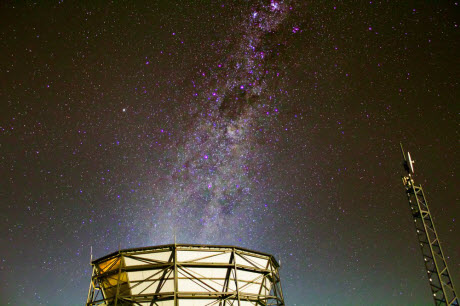 The Milky Way’s galactic plane rises above the Atacama Cosmology Telescope. The Simons Observatory is planned at the same site in Chile’s High Atacama Desert and will merge existing experiments and add new telescopes and detectors.Photo Credit: Jon Ward/University of Pennsylvania“While patterns that we see in the microwave sky are a picture of the structure of the universe 380,000 years after the Big Bang, we believe that some of these patterns were generated much earlier, by gravitational waves produced in the first moments of the universe’s expansion,” said project spokesperson Mark Devlin, a cosmologist at the University of Pennsylvania who leads the university’s team in the collaboration. “By measuring how the gravitational waves affect electrons and matter 380,000 years after the Big Bang we are observing fossils from the very, very early universe.”

Lee added, “Once we see the signal of inflation, it will be the beginning of a whole new era of cosmology.” We will then be looking at a time when the energy scale in the universe was a trillion times higher than the energy accessible in any particle accelerator on Earth.

By measuring how radiation from the early universe changed as it traveled through space to Earth, the observatory also will teach us about the nature of dark energy and dark matter, the properties of neutrinos and how large-scale structure formed as the universe expanded and evolved.

The Atacama Cosmology Telescope (ACT), pictured here, will merge with another set of instruments, the Simons Array, and new telescopes and equipment will be added at the site with the launch of the Simons Observatory project.Photo Credit: Princeton University

Two existing instruments at the site—the Atacama Cosmology Telescope and the Simons Array—are currently measuring this polarization. The foundation funds will merge these two experiments, expand the search and develop new technology for a fourth-stage, next-generation project—dubbed CMB-Stage 4 or CMB-S4—that could conceivably mine all the cosmological information in the cosmic microwave background fluctuations possible from a ground-based observatory.

“We are still in the planning stage for CMB-S4, and this is a wonderful opportunity for the foundations to create a seed for the ultimate experiment,” said Akito Kusaka, a Berkeley Lab physicist and one of the lead investigators. “This gets us off to a quick start.”

The Simons Observatory is designed to be a first step toward CMB-S4. This next-generation experiment builds on years of support from the National Science Foundation (NSF), and the Department of Energy (DOE) Office of Science has announced its intent to participate in CMB-S4, following the recommendation by its particle physics project prioritization panel. Such a project is envisioned to have telescopes at multiple sites and draw together a broad community of experts from the U.S. and abroad. The Atacama site in Chile has already been identified as an excellent location for CMB-S4, and the Simons Foundation funding will help develop it for that role.

“We are hopeful that CMB-S4 would shed light not only on inflation, but also on the dark elements of the universe: neutrinos and so-called dark energy and dark matter,” Kusaka said. “The nature of these invisible elements is among the biggest questions in particle physics as well.”

Experiments at the Chilean site have already paved the way for CMB-S4. A 2012 UC Berkeley-led experiment with participation by Berkeley Lab researchers, called POLARBEAR, used a 3.5-meter telescope at the Chilean site to measure the gravitational-lensing-generated B-mode polarization of the cosmic microwave background radiation. Team scientists confirmed in 2014 that the signal was strong enough to allow them eventually to measure the neutrino mass and the evolution of dark energy. 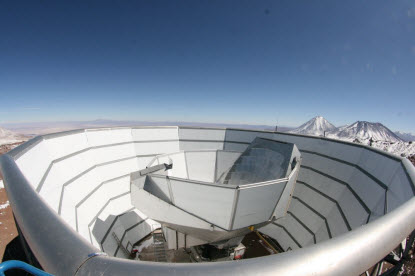 A view of the Atacama Cosmology Telescope (ACT) in Chile’s High Atacama Desert. ACT, in operation since 2006, has taken measurements of the cosmic microwave background (CMB) and of massive galaxy clusters. The Simons Observatory will consolidate experiments and add telescopes at this site.Photo Credit: Mark Devlin/University of PennsylvaniaThe recent addition of two more telescopes upgrades POLARBEAR to the Simons Array, which will speed up the mapping of the CMB and improve sky and frequency coverage. The $40 million in new funding will make possible the successor to the Simons Array and the nearby Atacama Cosmology Telescope.

Current stage-3 experiments for these short-wavelength microwaves, which must be chilled to three-tenths of a degree Kelvin above absolute zero, have about 10,000 pixels, Lee said.

“We need to make a leap in our technology to pave the way for the 500,000 detectors required for the ultimate experiment,” he said. “We’ll be generating the blueprint for a much more capable telescope.”

“The generosity of this award is unprecedented in our field, and will enable a major leap in scientific capability,” said Brian Keating, leader of the UC San Diego contingent and current project director. “People are used to thinking about mega- or gigapixel detectors in optical telescopes, but for signals in the microwave range 10,000 pixels is a lot. What we’re trying to do—the real revolution here—is to pave the way to increase our pixels number by more than an order of magnitude.”

Berkeley Lab and UC Berkeley will contribute $1.25 million in matching funds to the project over the next five years. The $1.7 million contributed by the Heising-Simons Foundation will be devoted to supporting research at Berkeley to improve the microwave detectors and to develop fabrication methods that are more efficient and cheaper, with the goal of boosting the number of detectors in CMB experiments by more than a factor of a ten.

The site in Chile is located in the Parque Astronómico, which is administered by the Comisión Nacional de Investigación Científica y Tecnológica (CONICYT). Since 1998, U.S. investigators and the NSF have worked with Chilean scientists, the University of Chile, and CONICYT to locate multiple projects at this high, dry site to study the CMB.