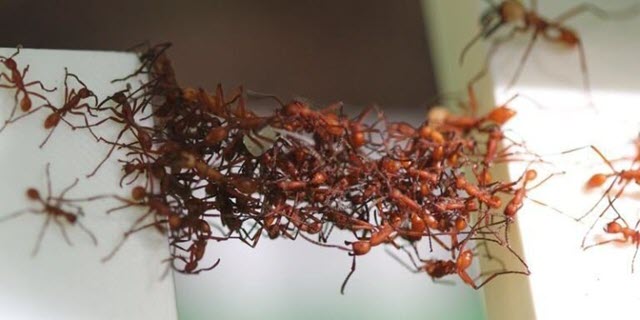 Colonies of social insects are capable of self-organizing and accomplishing complex tasks through individual interactions. For example, to march across large gaps, ants grip the bodies of each other, forming a living bridge that allows the colonies to reach the other side. Inspired by this swarm behavior of ants, scientists from the Chinese University of Hong Kong developed a nanoparticle self-assembly system that can fix broken electrical circuits.

The nanoparticles, made of iron oxide, have magnetic properties and can be controlled by a magnetic field. They are coated with a layer of gold that can conduct electricity. Under an external magnetic field, the nanoparticles can self-organize into a ribbon-like, conductive structure. The length and thickness of the nanoparticle ribbon can be controlled by fine-tuning the field, and the ribbons “dry” into hard structures after the magnetic field has been turned off. This “microswarm” system has demonstrated capabilities of fixing broken microscale circuits by making a stable and permanent conductive pathway between two disconnected electrodes, mimicking the structure and functionality of ant bridges.

This work is an interesting example of how science and technology can be inspired by nature. Similar to the ant colonies, a large number of nanoparticles are able to collectively accomplish tasks that are beyond the capabilities of one single nanoparticle. At the current stage, the nanoparticle ribbons can only fix broken circuits on a two-dimensional surface. Future development of this system should focus on improving the precision of nanoparticle assembly, and possibly developing an approach to make connections across a three-dimensional gap, which will then truly resemble the ant bridges.