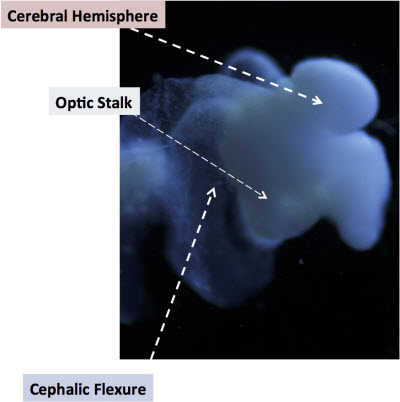 This image of the lab-grown brain is labeled to show identifiable structures: the cerebral hemisphere, the optic stalk and the cephalic flexure, a bend in the mid-brain region, all characteristic of the human fetal brain.Photo courtesy of Ohio State UniversityCOLUMBUS, Ohio – Scientists at Ohio State University have developed a nearly complete human brain in a dish that equals the brain maturity of a 5-week-old fetus.

The brain organoid, engineered from adult human skin cells, is the most complete human brain model yet developed, said Rene Anand, professor of biological chemistry and pharmacology at Ohio State.

The lab-grown brain, about the size of a pencil eraser, has an identifiable structure and contains 99 percent of the genes present in the human fetal brain. Such a system will enable ethical and more rapid and accurate testing of experimental drugs before the clinical trial stage and advance studies of genetic and environmental causes of central nervous system disorders.

“It not only looks like the developing brain, its diverse cell types express nearly all genes like a brain,” Anand said. “We’ve struggled for a long time trying to solve complex brain disease problems that cause tremendous pain and suffering. The power of this brain model bodes very well for human health because it gives us better and more relevant options to test and develop therapeutics other than rodents.”

Anand, who studies the association between nicotinic receptors and central nervous system disorders, was inspired to pursue a model of human neural biology after encountering disappointing results in a rodent study of an experimental autism drug. Taking a chance with a shoestring budget compared to other researchers doing similar projects, he added stem-cell engineering to his research program. Four years later, he had built himself a replica of the human brain. 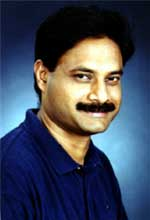 Rene AnandPhoto courtesy of Ohio State UniversityThe main thing missing in this model is a vascular system. What is there – a spinal cord, all major regions of the brain, multiple cell types, signaling circuitry and even a retina – has the potential to dramatically accelerate the pace of neuroscience research, said Anand, also a professor of neuroscience.

“In central nervous system diseases, this will enable studies of either underlying genetic susceptibility or purely environmental influences, or a combination,” he said. “Genomic science infers there are up to 600 genes that give rise to autism, but we are stuck there. Mathematical correlations and statistical methods are insufficient to in themselves identify causation. You need an experimental system – you need a human brain.”

Converting adult skin cells into pluripotent cells – immature stem cells that can be programmed to become any tissue in the body – is a rapidly developing area of science that earned the researcher who discovered the technique, Shinya Yamanaka, a Nobel Prize in 2012.

“Once a cell is in that pluripotent state, it can become any organ – if you know what to do to support it to become that organ,” Anand said. “The brain has been the holy grail because of its enormous complexity compared to any other organ. Other groups are attempting to do this as well.”

Anand’s method is proprietary and he has filed an invention disclosure with the university.

He said he used techniques to differentiate pluripotent stem cells into cells that are designed to become neural tissue, components of the central nervous system or other brain regions.

“We provide the best possible environment and conditions that replicate what’s going on in utero to support the brain,” he said of the work he completed with colleague Susan McKay, a research associate in biological chemistry and pharmacology.

High-resolution imaging of the organoid identifies functioning neurons and their signal-carrying extensions – axons and dendrites – as well as astrocytes, oligodendrocytes and microglia. The model also activates markers for cells that have the classic excitatory and inhibitory functions in the brain, and that enable chemical signals to travel throughout the structure.

It takes about 15 weeks to build a model system developed to match the 5-week-old fetal human brain. Anand and McKay have let the model continue to grow to the 12-week point, observing expected maturation changes along the way.

He and McKay have already used the platform to launch their own projects, creating brain organoid models of Alzheimer’s and Parkinson’s diseases and autism in a dish. They hope that with further development and the addition of a pumping blood supply, the model could be used for stroke therapy studies. For military purposes, the system offers a new platform for the study of Gulf War illness, traumatic brain injury and post-traumatic stress disorder.

Anand hopes his brain model could be incorporated into the Microphysiological Systems program, a platform the Defense Advanced Research Projects Agency is developing by using engineered human tissue to mimic human physiological systems.

Anand and McKay are co-founders of a Columbus-based start-up company, NeurXstem, to commercialize the brain organoid platform, and have applied for funding from the federal Small Business Technology Transfer program to accelerate its drug discovery applications.