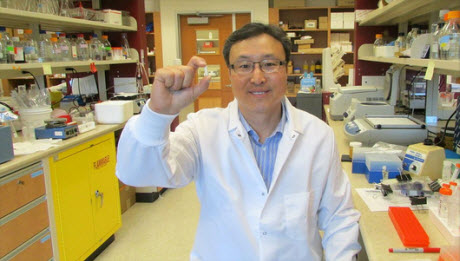 Hoon Sunwoo holds a sample of the antibody supplement he developed with colleague Jeong Sim. Sunwoo hopes the supplement, derived from chicken egg yolks, will soon improve quality of life for people with celiac disease.Photo courtesy of the University of Alberta(Edmonton) University of Alberta researchers may have found a way to help people with celiac disease enjoy the wide variety of foods they normally have to shun.

Hoon Sunwoo, an associate professor in the Faculty of Pharmacy and Pharmaceutical Sciences, and colleague Jeong Sim, a retired professor from the Faculty of Agricultural, Life & Environmental Sciences, have developed a natural supplement from the yolks of chicken eggs that prevents the absorption of gliadin, a component of gluten that people with celiac disease have difficulty digesting.

“This supplement binds with gluten in the stomach and help to neutralize it, therefore providing defence to the small intestine, limiting the damage gliadin causes,” said Sunwoo. “It is our hope that this supplement will improve the quality of life for those who have celiac disease and gluten intolerance.”

According to the Canadian Celiac Association, one in 133 people in Canada are affected by celiac disease, a medical condition in which the absorptive surface of the small intestine is damaged by a substance called gluten. Those with celiac disease and gluten intolerance suffer from symptoms including anemia, headaches, bloating and fatigue. Gluten, a protein found in wheat, rye and barley among other foods, is a common binding agent used to increase the elasticity of food.

Sunwoo became interested in the disease after learning his friend and his friend’s family suffered from it.

“I wanted to learn more about why some people cannot tolerate gluten and if there was a way to reduce the symptoms,” he said. “With gluten present in so much of our food, I wanted to find a way to improve the quality of life for my friend, his family and others.”

The research may prove to be welcome news for celiac patients in Canada and around the world. The next step is an efficacy trial, slated to happen within the next year.  Following that, the supplement could be available within three years. Sunwoo and Sim have partnered with IGY Inc. and Vetanda Group through an agreement with TEC Edmonton to bring the supplement to market.

“This collaboration gives us the opportunity to change the lives of those suffering with a debilitating autoimmune condition,” said Vetanda Group communications director Claire Perry. “Our groundbreaking new health product has the potential to offer more dietary freedom and, overall, a much better quality of life for gluten-intolerant individuals. The product could be available to celiac sufferers in Canada within three years, paving the way for testing and product approval in the United States and Europe.”

TEC Edmonton, a partnership of the U of A and Edmonton Economic Development that helps commercialize research from the university, is proud to be a part of the collaboration.

“The University of Alberta is home to world-class researchers in the fields of immunology, biotechnology and food science,” said Jay Kumar, vice-president of technology management at TEC Edmonton. “The investment by Vetanda, based in England, demonstrates that the world is watching.”

Parts of the research were also supported by grants from Alberta Livestock and Meat Agency, Alberta Agriculture and Forestry, and Alberta Innovation and Advanced Education.

Sunwoo also credits the U of A for being an integral part of his work’s success. “The University of Alberta is an incredible place to do research. Our lab in the Faculty of Pharmacy and Pharmaceutical Sciences is top-notch, and I am pleased to have the support and funding to continue to work towards improving the quality of life for those who suffer from celiac disease and gluten intolerance.”