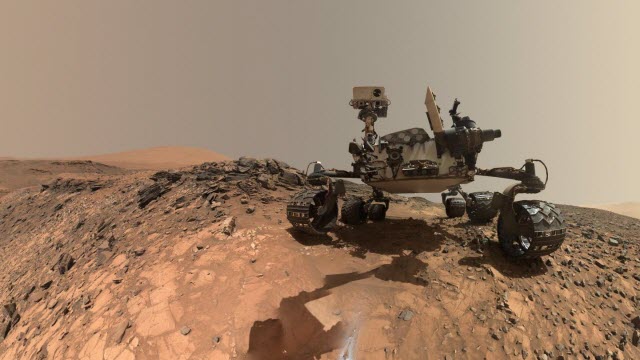 Illustration of NASA's Curiosity rover which has been exploring Mars since 2012.Illustration credit: NASA/JPL-Caltech/MSSS

The CO2 level in Mars' primitive atmosphere 3.5 billion years ago was too low for sediments, such as those found by NASA's Curiosity exploration vehicle in areas like the Gale Crater on the planet's equator, to be deposited. This and other conclusions are drawn from a paper written with the participation of researchers from the Spanish National Research Council (CSIC) and published in the latest issue of the journal, Proceedings of the National Academy of Sciences (PNAS).

The area Curiosity has been analyzing since 2012, as part of NASA's Mars Science Laboratory mission, is composed primarily of sedimentary sequences deposited at the bottom of a lake 3.5 billion years ago. These sediments contain various secondary minerals, such as clays or sulphates, which indicate that the primitive surface was in contact with liquid water.

The existence of liquid water requires a warm surface temperature brought about by a minimum content of CO2 in the atmosphere. Yet this was not the case with Mars in its beginnings. "This contradiction has two possible solutions. Either we have not yet developed climatic models which explain the environmental conditions on Mars at the beginning of its history, or the Gale sedimentary sequences really did form in a very cold climate", explains CSIC researcher Alberto Fairén, who works at the Centre for Astrobiology near Madrid (a joint centre run by CSIC and Spain's National Institute of Aerospace Technology).

"However, the rover has not found carbonates, thereby confirming the results of studies by all previous probes: carbonates are very scarce on the surface of Mars and, therefore, the CO2level in the atmosphere was very low", adds. Fairén.

Specifically, the direct analysis of samples on the surface of Mars carried out by these researchers shows that the level of CO2 in the atmosphere at the time the Gale Crater sediments were deposited was between 10 and 100 times less than the minimum required for the surface temperature to be above the freezing point of the liquid water.

On Earth, carbonate deposits form on lake and sea beds when CO2 in the atmosphere interacts with liquid water. Carbon dioxide is a gas capable of generating a powerful 'greenhouse effect' and, therefore, of heating the planet.

According to the scientists, an image that maybe would describe Gale in the early days of Mars would be that of a glacial lake, surrounded by huge masses of ice, which would be partially or seasonally frozen. "The environment would have been similar to the Canadian Arctic or to Greenland today," says the CSIC researcher.

In addition, although ice would have dominated, it would also have been common to find liquid water present in abundance. The formation of clays and sulphates would have occurred at specific places and times, seasonally, or under an ice cap in liquid water lakes.