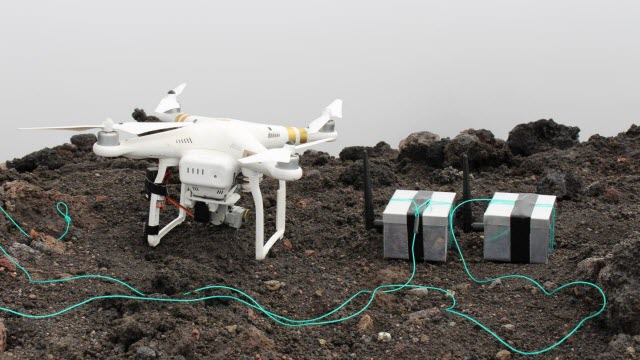 Such extreme, hazardous and unpredictable environments present a very difficult challenge to reliably record volcanic behaviour for analytical models. For some volcanoes it is simply too dangerous for a human approach. To tackle this problem researchers from across the Faculties of Science and Engineering have developed highly specialised sensor pods, called "dragon eggs", that can be positioned in dangerous locations using a drone and provide valuable real-time data of volcanic activity that can be used to inform volcanic hazard assessments.

The researchers envisage numerous applications for the technology they are developing, including remote monitoring of other natural phenomenon such as glaciers and geological faults, and man-made hazards, such as nuclear waste storage sites.

The "dragon eggs" currently being developed are autonomous and intelligent sensor pods designed to monitor volcanic activity. They are being equipped with a range of state-of-the-art sensors for temperature, humidity, vibrations, and numerous toxic gases. A significant challenge is optimising the design to meet many different criteria. They must, be able to operate in the extreme conditions of a volcano, be light enough to be carried by a drone, and be ultra-efficient in power consumption since maintenance is not an option at the summit of an active volcano!

These sensor pods are the result of an intense cross-faculty collaboration and incorporate remarkable new technologies invented and developed at the University of Bristol. Among these, the self-energising event detectors, known as "sensor-driven" detectors, are a vital part of this new device. They allow the eggs to remain dormant for prolonged periods of time, preserving power, until volcanic activity is detected when the dragon egg "hatches" into a full-featured remote monitoring station with a wireless transmitter.

Designed by the Electrical Energy Management and the Digital Health research groups, the event detectors have the lowest stand-by power consumption in the world. They can be activated by pulses as low as 5 picojoules (about 50,000 times less than the energy of a single flying mosquito). Therefore, sensor-driven detectors do not require battery power to remain operational, and instead use a fraction of the energy contained in the sensor signals.

The eggs are placed on the slope of the volcano and they are designed to hatch when the sensor-driven module detects vibrations caused by volcanic tremors. In the future, the eggs will be engineered to respond to a range of different volcanic stimuli. Thanks to this detection circuit, the eggs can remain in service for many months without depleting their energy resources.

These detectors have been licenced to and further developed by tech start-up Sensor Driven Ltd, and have already been field tested in a deployment at Stromboli volcano in Italy, marking the first attempt to use such a technology for monitoring an active volcano.

With a powerful wireless transmitter, the dragon eggs can report data to a base station with a satellite uplink at a safe distance of up to 10 km; far away from the dangers of the volcano. The ultra-efficient sensor driven technology is key to maximising the life span of each individual egg. The eggs synergise together as an intelligent low power sensor network with a star topology, which enables the network to continue operation even after several eggs have been engulfed in lava and flames.

Dr Yannick Verbelen, Research Associate in the School of Physics, said: "It is the first time an autonomous system using zero-power listening technology has been deployed in this kind of hostile environment. We are pushing the limits of the sensor driven low-power monitoring in this application, but that's what research is all about."

Due to the extreme conditions near the volcanic vents, the "dragon eggs" are designed to be deployed by flying Unmanned Aerial Vehicles (UAVs). Using a lightweight yet fast drop-off mechanism, a small drone with high agility can be used for the deployment missions, minimising the time spent by the UAV in the danger zone and limiting its exposure to highly corrosive volcanic gases.

Dr Kieran Wood, Senior Research Associate and UAV specialist in Aerospace Engineering, explained: "This is an exemplary application for using UAVs (drones). Approaching volcanoes is hazardous and logistically challenging. UAVs can efficiently place sensors at long-range to minimise risk and improve the efficiency of data collection".

This pioneering research is being been funded through two complimentary UK Research and Innovation grants: ASPIRE, aimed at developing low powered sensors for extreme environments, and the National Centre for Nuclear Robotics (NCNR) aimed at developing advanced robotics and artificial intelligence technologies for nuclear industry applications. Recently, the project has also received support from the Cabot Institute Innovation Fund.

Lead at Bristol for both grants, Professor Tom Scott, said: "Combining the cross-disciplinary expertise and technologies from several complimentary grants working together has allowed us to achieve something truly game-changing. Such an approach has enabled us to deliver results on a much shorter timeline and smaller budget than would usually be possible."