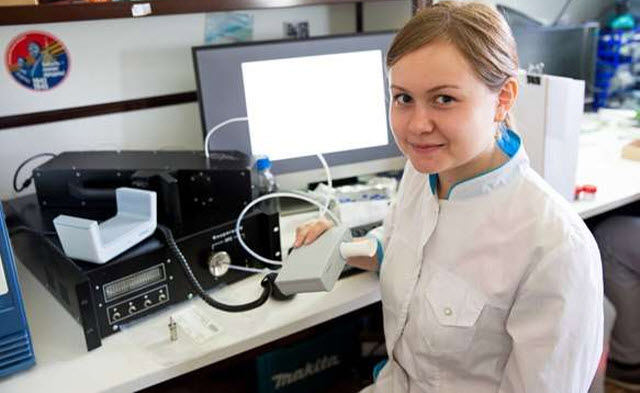 According to the World Health Organization, one of the main causes of mortality is cardiovascular disease. Early detection of symptoms is critical for medical intervention. However, traditional methods of examination (X-ray, ultrasound investigation, laboratory methods, etc.) diagnose only structural or late changes. The development of simple and diagnostics to track functional early signs of disease is the research subject of scientists around the world.

With the help of ion mobility spectrometry, it is possible to conduct accurate, non-invasive diagnosis of diseases and monitor a patient's condition via the analysis of exhaled air. For these purposes, researchers created an experimental device informally called the "electronic nose."

The device is being developed and improved by postgraduate student Julia Shaltaeva and a group of scientists under the leadership of Professor Vladimir Belyakov. "Our team is doing everything possible so that this device can be used on a massive scale in the near future—for example, in screening for early detection of disease and monitoring of therapy," Shaltaeva says.

Design, manufacture, and experimental testing of a prototype of the diagnostic system is based on a gas sampling valve with fixed dose volume, a multicapillary chromatographic tube and an ion mobility detector with a non-radioactive ionization source. The use of high-performance chromatographic separations, combined with ion mobility spectrometry, allows researchers to identify a wide range of substances in concentrations of about ng/ml.

At the moment, scientists have made a clinical study of 50 patients who were observed in a cardiology clinic of the Sechenov First Moscow State Medical University. With the electronic nose, they identified marker substances in the breath of subjects, which, according to scientists, will allow diagnosis of chronic heart failure.