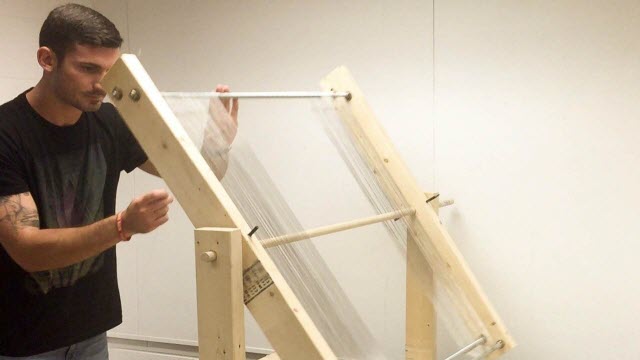 Josh Tulkoff constructs a large prototype of the fog harp, which consists of a vertical array of 700 wires and is based on initial experimental results. Tulkoff was part of an interdisciplinary research team at Virginia Tech that discovered parallel wire arrays could increase the water collection capacity of fog nets by threefold.Photo courtesy of Virginia Tech

After all, installing giant nets along hillsides and mountaintops to catch water out of thin air sounds more like folly than science. However, the practice has become an important avenue to clean water for many who live in arid and semi-arid climates around the world.

A passive, durable, and effective method of water collection, fog harvesting consists of catching the microscopic droplets of water suspended in the wind that make up fog. Fog harvesting is possible—and has gained traction over the last several decades—in areas of Africa, South America, Asia, the Middle East, and even California. As illustrated by recent headlines of South Africa's countdown to "Day Zero," or the day the water taps are expected to run dry, water scarcity continues to be a growing problem across the globe. Leading researchers now estimate that two-thirds of the world's population already live under conditions of severe water scarcity at least one month of the year.

Fog harvesting could help alleviate that shortage, and now an interdisciplinary research team at Virginia Tech has improved the traditional design of fog nets to increase their collection capacity by threefold.

Published in ACS Applied Materials & Interfaces and partially funded by the Virginia Tech Institute for Creativity, Arts, and Technology, the team's research demonstrates how a vertical array of parallel wires may change the forecast for fog harvesters. In a design the researchers have dubbed the "fog harp," these vertical wires shed tiny water droplets faster and more efficiently than the traditional mesh netting used in fog nets today.

"From a design point of view, I've always found it somewhat magical that you can essentially use something that looks like screen door mesh to translate fog into drinking water," said Brook Kennedy, associate professor of industrial design in the College of Architecture and Urban Studies and one of the study's co-authors. "But these parallel wire arrays are really the fog harp's special ingredient." 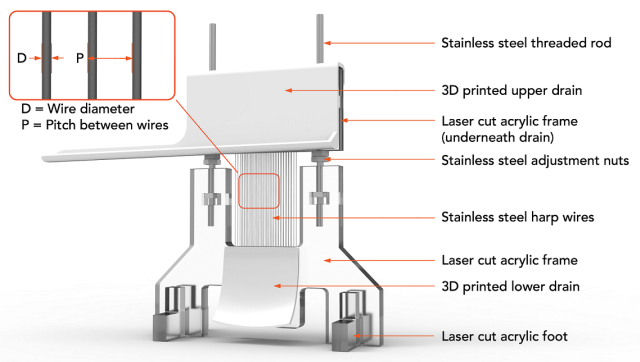 To test the fog harp’s design, researchers constructed small-scale models of vertical wire arrays that could be placed inside an environmental chamber with artificial fog. The team discovered that water collection efficiency continued to increase with smaller and smaller wires.Image courtesy of Virginia Tech

Fog nets have been in use since the 1980s and can yield clean water in any area that experiences frequent, moving fog. As wind moves the fog's microscopic water droplets through the nets, some get caught on the net's suspended wires. These droplets gather and merge until they have enough weight to travel down the nets and settle into collection troughs below. In some of the largest fog harvesting projects, these nets collect an average of 6,000 liters of water each day.

However, the traditional mesh design of fog nets has long posed a dual constraint problem for scientists and engineers. If the holes in the mesh are too large, water droplets pass through without catching on the net's wires. If the mesh is too fine, the nets catch more water, but the water droplets clog up the mesh without running down into the trough and wind no longer moves through the nets.

Thus, fog nets aim for a middle ground, a Goldilocks zone of fog harvesting: mesh that's not too big and not too small. This compromise means nets can avoid clogging, but they're not catching as much water as they could be.

"It's an efficiency problem and the motivation for our research," said Jonathan Boreyko, assistant professor in the Department of Biomedical Engineering and Mechanics in the College of Engineering. As a co-author of the study, Boreyko consulted on the theory and physical aspects of the fog harp’s design.

"That hidden regime of making the wires smaller but not clogging is what we were trying to accomplish. It would be the best of both worlds," he said.

Since the water droplets caught in a fog net move downward with gravity, Boreyko hypothesized that removing the horizontal wires of the net would alleviate some of the clogging. Meanwhile, Kennedy, who specializes in biomimetic design, found his inspiration for the fog harp in nature.

“On average, coastal redwoods rely on fog drip for about one-third of their water intake,” said Kennedy. “These sequoia trees that live along the California coast have evolved over long periods of time to take advantage of that foggy climate. Their needles, like those of a traditional pine tree, are organized in a type of linear array. You don’t see cross meshes.”

Mark Anderson, a study co-author and then-undergraduate student in the Department of Mechanical Engineering, built several scale models of the fog harp with varying sizes of wires. Weiwei Shi, a doctoral student in the engineering mechanics doctoral program as well as the study’s lead author, tested the small prototypes in an environmental chamber and developed a theoretical model of the experiment.

“We found that the smaller the wires, the more efficient the water collection was,” said Boreyko. “These vertical arrays kept catching more and more fog, but the clogging never happened.”

The team has already constructed a larger prototype of the fog harp—a vertical array of 700 wires that measures three feet by three feet—in an effort led by Kennedy with assistance from Josh Tulkoff, study co-author and a then-undergraduate student in the industrial design program. They plan to test the prototype on nearby Kentland Farm.

Through its unique combination of science and design, the researchers hope the fog harp will one day make a big impact where it’s needed most—in the bottom of the water bucket.