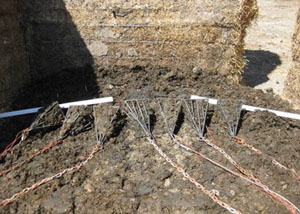 Retrieval pyramids filled with manure were placed at the bottom location of stockpiles. These pyramids allowed manure to be exposed to the hot conditions within the center of the pyramid, reducing bacterial survival and promoting the degradation of genes that code for antibiotic resistance.Photo credit: Andrew Olsen at Agriculture and Agri-Food CanadaManure management is serious business for a meat-hungry world. A single cow, depending on its size, can generate between 43 and 120 pounds of manure a day. Cow manure can be a low-cost fertilizer for farmers’ crops. But manure can also host antimicrobial resistant bacteria.

Most bacteria are harmless. However, infamous pathogens that can originate from cattle manure include E. coli, Salmonella, and Yersinia. These bacteria can have grave side effects like fever, nausea, diarrhea and vomiting.

Tim McAllister is a principal research scientist in ruminant microbiology and nutrition at the Lethbridge Research Centre of Agriculture and Agri-Food Canada in Alberta, Canada. McAllister and his colleagues have been testing creative ways to target antimicrobial resistance genes in manure.

“Not all bacteria are bad,” said McAllister, “The trick is finding which become resistant and whether or not those will affect human health.”

Antimicrobials are fed or injected into cattle every year to keep cattle healthy. But there’s a downside to the use of antibiotics: “When you use antibiotics, bacterial resistance is inevitable,” said McAllister, “There’s always trade-offs in nature. It really is a matter of which bacteria become resistant and if it has any implications for human health.” 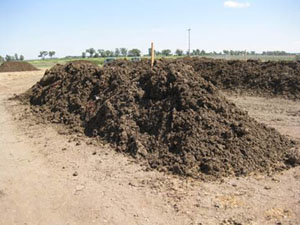 Composted manure from cattle treated with antibiotics. Composted manure is actively turned, allowing for heat to disperse throughout the pile. This kills most bacteria as well as increases the degradation of any antibiotic residues that may remain in the manure.Photo credit: Andrew Olsen at Agriculture and Agri-Food CanadaIn cattle, antibiotic residues can be excreted in feces and urine. “Even the most pristine soils harbor antibiotic resistant bacteria. Then it’s a matter of figuring out if these resistant bacteria exchange DNA with other bacteria that could cause human infections. It’s a remote possibility considering that most bacteria that survive well in the human body do less well in the broader environment,” McAllister says.

Fortunately, most bacteria can’t survive high temperatures. For this reason, farmers employ “manure-cooking” strategies to kill bacteria before it’s applied to the land. One strategy is to stockpile manure in large pyramid-shaped mounds. The heat generated by the dense piles of manure acts as an oven. Most bacteria die after being exposed to temperatures above 131 degrees Fahrenheit or higher over a period of a few days. Windrow composting is another type of manure management. Instead of large, passive piles, the manure is kept in long rows and is regularly churned to extend the heating period with temperatures as high as 160 degrees Fahrenheit.

Researchers wanted to know which method was most reliable to kill the bacteria and degrade the DNA associated with antibiotic reistance. They used manure from cattle treated with various antibiotics to find that composting works best for killing bacteria with resistance genes. The mixing process also speeds up decomposition and reduces the volume of manure.

“Composting is an active process,” McAllister said, “You churn up the manure so that all the materials achieve a higher temperature.”

Storing manure in stockpiles works, but not as thoroughly. The heat tends to concentrate in the middle of the pile and doesn’t reach the outer edges.

Future experiments could observe the journey of bacteria from farm to the surrounding environment. McAllister described an ideal “systems approach” experiment to discover where resistant bacteria end up if it hasn’t been destroyed by composting or stockpiling.

“The concentration of bacteria is the issue, and if those concentrations travel. The journey for most bacteria from the animal through the environment to people is a tough one, Most bacteria do not make it. Manure management practices such as composting and stockpiling can make this journey for bacteria even more difficult,” he said.

Tracking the dynamics of this bacterial journey requires a host of scientists and a lot of grant writing.

“Not my favorite part,” says McAllister. “But I do love moving into new areas of research.”

Read more about McAllister’s research in the Journal of Environmental Quality.